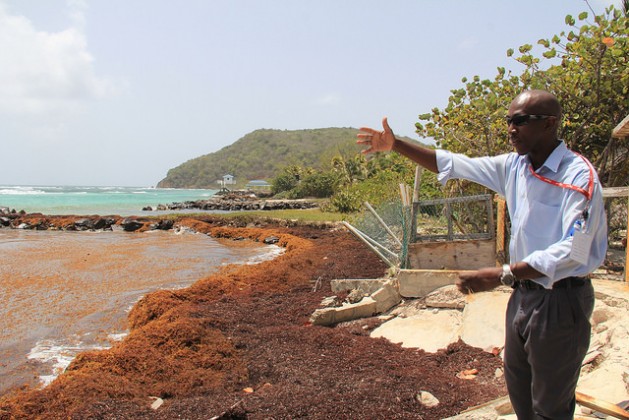 Allan Providence, a senior officer at Union Island Airport, says he has seen the sea rise significantly over the past 22 years. Credit: Kenton X. Chance/IPS

KINGSTOWN, St. Vincent, Jul 1 2015 (IPS) - Fifteen years ago, Stephanie Browne, a former Member of Parliament in St. Vincent and the Grenadines, needed only to look at the beach outside her house to know why her community in Union Island was called “Big Sand”.

So expansive were the beach and dunes that people played cricket games there without getting wet.

“The water is too deep to show you where our fence was because a part of our fence is now way out in the sea." -- Stephanie Browne

Today, just a few feet of sand remain, saved only by the large boulders that have been placed more than 20 feet into the sea, where the fence for Browne’s property once stood.

“There could have been other reasons but I think climate change is the main reason for losing that beach down there,” Browne, who retired from politics 15 years ago, tells IPS.

“The water is too deep to show you where our fence was because a part of our fence is now way out in the sea and we have lost land for a number of years,” she says.

“What we’ve had to do is to use the boulders to try to keep our land and that’s why we are able to still have a little beach there. If not, there would absolutely be no beach,” she explains.

Browne tells IPS that she estimates the amount of land lost is enough to build a two-bedroom house of the type common in St. Vincent and the Grenadines, complete with a yard and fencing.

“There was a lot of sand and a lot of beach. Now, we have a lot of rocks, trying to save what we can,” she says.

Union Island is one of the southern-most islands in the archipelagic nation of St. Vincent and the Grenadines, a country of 32 islands, islets and cays.

Unlike St. Vincent, the “main island”, the Grenadines has the white sand beaches commonly associated with tourism, the main revenue earner on the island and the country.

But rising seas, blamed on climate change, are beginning to imperil the beaches on the five-kilometre by three-kilometre island of 3,000 people.

Allan Providence, a senior officer at Union Island Airport, was born in St. Vincent but has been living in Union Island for 22 years.

“I know exactly what the island was like before it came to this point,” he tells IPS while standing on the sliver of sand that remains at Big Sand.

“What you are seeing here, this location, this is a structure that they used to have beach-o-rama and picnics and so on, and even out in the water where you are seeing the water is breaking now was where people would congregate, partying,” Providence says, pointing to an area 30 to 40 feet away.

The structure to which he referred is a concrete building with a zinc roof that has begun to collapse as the rising water undermines its foundation.

“But now, we have the sea is here. So, over the years, it has really degraded and brought it to this point,” Providence tells IPS.

“The water is rising and the sea is coming in, and that would definitely be as a result of climate change. Definitely. It was never like this,” Providence tells IPS.

Residents of Union Island are doing what they can to highlight the impact of climate change.

One way that this is being done is through Radio Grenadines, an Internet radio station that was officially launched on June 12, two years after it was founded in the bedrooms of two residents.

The launch of the not-for-profit radio station coincided with the graduation of 21 its contributors from a media training course endorsed by the Association of Caribbean Media Workers.

The training programme focused on using media to spread awareness about climate change and what can be done at the level of the citizen. It was funded by the Global Environment Facility Small Grants Programme (GEF SGP).

Speaking at the graduation ceremony, Haydn Billingy, national co-ordinator of the GEF, noted that the National Anthem of St. Vincent and the Grenadines celebrates the seas and “golden sands” of the Grenadines.

He noted that the Radio Grenadines project looks at using electronic media to raise awareness “about the important issue of climate change that is affecting us not only locally but globally”.

“In this harsh economic climate, there are still NGOs who are locally bred who care enough about the environment to dedicate tremendous voluntary work to ensure that it is protected for future generations,” Billingy said in reference to Radio Grenadines and other NGOs that focus on climate change.

“It shows that some people still appreciate and understand the indelible, fragile connection between the environment and human health and also livelihoods,” Billingy told the graduates.

In addition to the 21 persons trained in radio broadcasting, 62 members of NGOs that focus on the environment and climate change were trained in public relations and media use.

Billingy tells IPS that this is what is meant by “community empowerment”.

“Indeed, I am seeing the Grenadines being the forerunner of environmental protection in St. Vincent and the Grenadines,” Billingy tells IPS.