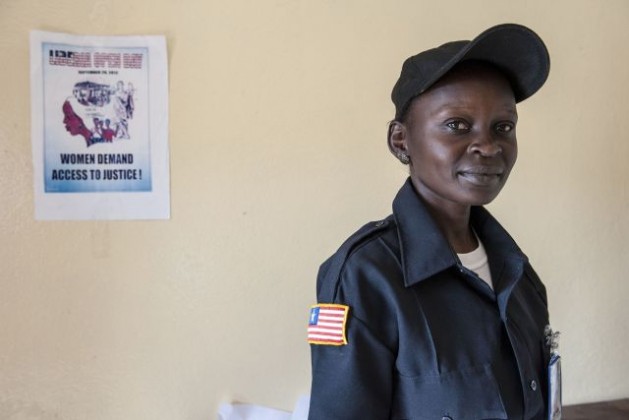 UNITED NATIONS, Jul 30 2015 (IPS) - This October will mark the 15th anniversary of the adoption of U.N. Security Council Resolution 1325. The landmark resolution on Women, Peace and Security (WPS) recognises not only the disproportionate impact armed conflict has on women, but also the lack of women’s involvement in conflict resolution and peace-making.

It calls for the full and equal participation of women in conflict prevention, peace negotiations, humanitarian response and post-conflict reconstruction and urges member states to incorporate a gender perspective in all areas of peace-building and to take measures to protect women from sexual violence in armed conflict.

The key challenges in protecting women and children in emergencies, and ensuring women are able to participate in these processes, is not related to knowing what needs to happen. We need a commitment to do it." -- Marcy Hersh

But despite all these commitments on paper, actual implementation of the WPS agenda in the real world continues to lag, according to humanitarian workers and activists.

Data by the U.N. and NATO show that women and girls continue to be disproportionately affected by armed conflict.

Kang Kyung-wha Assistant Secretary-General for Humanitarian Affairs and Deputy Emergency Relief Coordinator at the U.N. Office for the Coordination of Humanitarian Affairs (OCHA), who spoke at a recent lecture series on WPS, cited as example the situation of women and girls on the border between Nigeria and Niger, where the average girl is married by 14 and has two children by age 18.

Secondary education for girls is almost non-existent in this area and risks of violence, sexual abuse, exploitation and trafficking are particularly high, she said.

“Thus marginalised and disempowered, [these women and girls] are unlikely to play any part in building stable communities and participate in the socio-economic development of their societies and countries,” Kang said.

“Despite 1325 and the successor resolutions…women and girls continue to be routinely excluded from decision-making processes in humanitarian responses as well as in peace-negotiations and peace-building initiatives.”

High expectations are placed on the World Humanitarian Summit, scheduled to take place in May 2016 in Istanbul. Activists hope that the summit will help turn the numerous rhetorical commitments into concrete actions.

Marcy Hersh, Senior Advocacy Officer at Women’s Refugee Commission, who also spoke on the panel, told IPS: “Women and girls are gravely implicated in peace and security issues around the world, and therefore, they must be a part of the processes that will lead to their protection.”

“The key challenges in protecting women and children in emergencies, and ensuring women are able to participate in these processes, is not related to knowing what needs to happen…We need a commitment to do it. We need to see leadership and accountability in the international community for these issues.”

“If humanitarian leadership, through whatever mechanisms, can finally collectively step up to the plate and provoke the behavioral change necessary to ensure humanitarian action works with and for women and girls, we will have undertaken bold, transformative work.”

Another challenge in making the women, peace and security agenda a reality is linked to psychological resistance and rigid adherence to the traditional status quo. Gender-related issues tend to be handled with kid gloves due to “cultural sensitivity”, according to Kang Kyung-wha.

“But you can’t hide behind culture,” Kang said.

Also, women activists continue to face misogyny and skepticism in their communities and at the national level. Christine Ahn, co-founder of the Korea Policy Institute and former Senior Policy Analyst at the Global Fund for Women, told IPS that often enough the involvement of women in peace-keeping processes seems inconceivable to some of the men in power who hold key positions in international relations and foreign policy.

“They are calling us naive, dupes, fatuitous. Criticism is very veiled of course, we are in the 21st century. But even if it is a very subtle way in which our efforts are discounted, it is, in fact, patriarchy in its fullest form.”

Christine Ahn spoke at the second event of the lecture series at the United Nations. She is one of the 30 women who, in May 2015, participated in the Crossing of the De-Militarised Zone (DMZ) between North and South Korea as part of a one-week long journey with North and South Korean women.

The project aimed at fostering civil society contacts between women in North and South Korea and promoting peace and reconciliation between the countries.

The symbolic act for peace at one of the world’s most militarised borders can be seen as a practical example of Security Council resolution 1325.

Ahn told IPS: “We will use resolution 1325 when we advocate that both of Korean women are able to meet because under each government’s national security laws they are not allowed to meet with the other – as it is considered meeting with the enemy.”