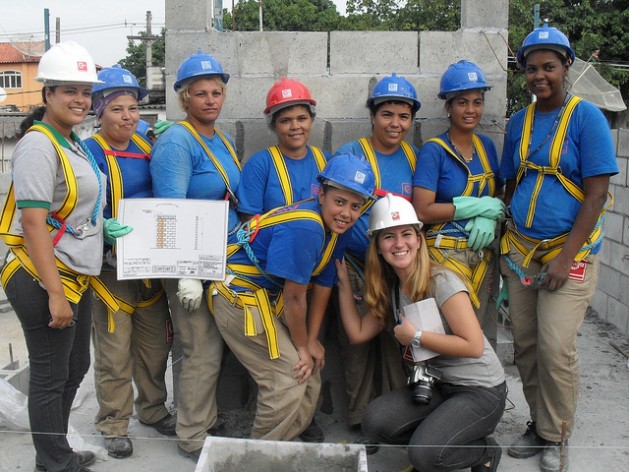 The heaviest round of applause came when the Commission specifically called for a “stand-alone goal” on gender equality – a longstanding demand by women’s groups and non-governmental organisations (NGOs) – in the U.N.’s post-2015 development agenda.

Still, the primary inter-governmental policy-making body on gender empowerment did not weigh in on a key proposal being kicked around in the corridors of the world body: a proposal for a woman to be the next U.N. secretary-general (SG), come January 2017.

Ambassador Anwarul K. Chowdhury, a former U.N. under-secretary-general who is credited with initiating the conceptual and political breakthrough resulting in the adoption of U.N. Security Council resolution 1325 on women and peace and security, told IPS the annual CSW session is the largest annual gathering with special focus on issues which impact on women, and thereby humanity as a whole.

"It attracts hundreds of government and civil society participants representing their nations and organisations. After the very late night consensus adoption, the agreed conclusions of its 58th session, which focused on the post-2015 development agenda, show a striking gap in firmly establishing the linkage between peace and development in the document," he said.

"The mainstream discussions in this context have always been highlighting the point that MDGs lacked the energy of women's equal participation at all decision making levels and the overall and essential link between peace and development. So, in UN's work on the new set of development goals need to overcome this inadequacy. Somehow this still remains in the outcome of CSW-58.

"Adoption of the landmark U.N. Security Council resolution 1325 boosted the essential value of women's participation. Its focus relates to each of the issues on every agenda of the U.N. There is a need for holistic thinking and not to compartmentalise development, peace, environment in the context of women's equality and empowerment," Ambassador Chowdhury said.

"It is necessary that women's role in peace and security is considered as an essential element in post-2015 development agenda."
“I did not hear it, but it’s a good question to raise given that a major section of the CSW’s ‘Agreed Conclusions’ were on ensuring women’s participation and leadership at all levels and strengthening accountability,” Mavic Cabrera-Balleza, international coordinator at the Global Network of Women Peacebuilders (GNWP), told IPS.

She said that in pre-CSW conversations, she heard the names of two possible candidates from Europe – whose turn it is to field candidates on the basis of geographical rotation – but both were men.

“The question is: Is the United Nations ready for a woman SG?” she asked.

Dr. Abigail E. Ruane, PeaceWomen Programme Manager at the Women’s International League for Peace and Freedom (WILPF), told IPS the biggest thing at the CSW session was support for a gender equality goal in the post-2015 development agenda and the integration of gender throughout the proposed sustainable development goals (SDGs).

She said the recognition of the link between conflict and development was also important because it is not one that is usually recognised.

Asked about the proposal for a woman SG, she said: “I didn’t hear any discussion of a woman SG in the sessions I participated in.”

Harriette Williams Bright, advocacy director of Femmes Africa Solidarite (FAS), also told IPS the various civil society and CSW sessions she attended did not bring up the discussion of a woman as the next SG.

Still, she said the commitment of the CSW to a stand-alone goal on gender equality is welcomed and “we are hopeful that member states will honour this commitment in the post-2015 development framework and allocate the resources and political will needed for concrete progress in the lives of women, particularly in situations of conflict.”

Antonia Kirkland, legal advisor at Equality Now, told IPS her organisation was heartened that U.N. member states were able to reach consensus endorsing the idea that gender equality, the empowerment of women and the human rights of women and girls must be addressed in any post-2015 development framework following the expiration of MDGs in 2015.

“Throughout the process there has been broad agreement that freedom from violence against women and girls and the elimination of child marriage and FGM must be achieved,” she said.

“Equality Now believes sex discriminatory laws, including those that actually promote violence against women and girls, should be repealed as soon as possible to really change harmful practices and social norms,” Kirkland added.

Cabrera-Balleza of GNWP said the call for a stand-alone goal on gender equality; women’s empowerment and human rights of women and girls; the elimination of FGM and honour crimes, child, early and forced marriages; protection of women and girls from violence; the protection of women human rights defenders; the integration of a gender perspective in environmental and climate change policies and humanitarian response to natural disasters; “are all reasons to celebrate.”

She regretted the CSW conclusions did not make a link between peace, development and the post-2015 agenda.

The earlier drafts of the Agreed Conclusions were much stronger in terms of defining this intersection, she noted.

Cabrera-Balleza pointed out that “even as we hold governments accountable to respond to this gap, we need to have a serious dialogue among ourselves too as civil society actors – across issues, across different thematic agendas.”

Dr. Ruane of WILPF told IPS that despite longstanding commitments to strengthen financing to move words to action, including through arms reduction, such as included both in the plan of action at the Earth Summit in Rio (1992) and the Beijing women’s conference (1995), “governments gave in to pressure to weaken commitments and ended up reiterating only support for voluntary innovative financing mechanisms, as appropriate.”

In a statement released Monday, Development Alternatives with Women for a New Era (DAWN) said that while the MDGs resulted in a reduction of poverty in some respects, the goals furthest from being achieved are those focused on women and girls – particularly on achieving gender equality and improving maternal health.

Executive Director of U.N. Women Phumzile Mlambo-Ngcuka said the agreement represents a milestone toward a transformative global development agenda that puts the empowerment of women and girls at its centre.

She said member states have stressed that while the MDGs have advanced progress in many areas, they remain unfinished business as long as gender inequality persists.

As the Commission rightly points out, she said, funding in support of gender equality and women’s empowerment remains inadequate.

Investments in women and girls will have to be significantly stepped up. As member states underline, this will have a multiplier effect on sustained economic growth, she declared.

At the conclusion of the session, CSW Chair Ambassador Libran Cabactulan of the Philippines said “it is critical, important and urgent to appreciate every tree in the forest, and have an agreement on how big, how tall or how fat each tree.

“At the same time, we need to be mindful of the entire forest,” she added, pointing out that “the absence of peace and security in the discourse on post-2015 agenda does not make a whole forest.”