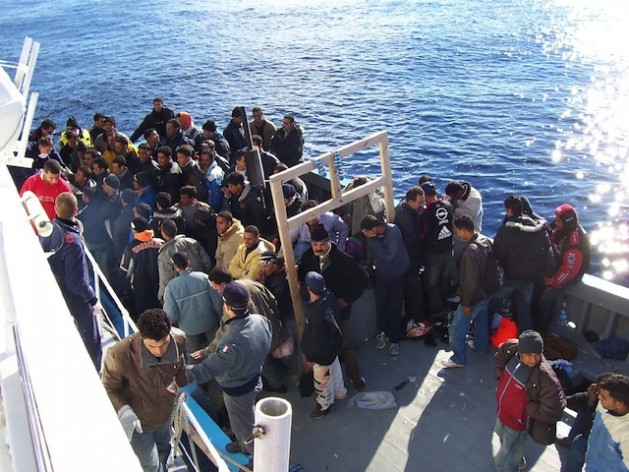 UNITED NATIONS, Aug 30 2015 (IPS) - As tens of thousands of refugees continue to flee conflict-ridden countries, including Afghanistan, Iraq, Libya and Syria, Western European governments and international humanitarian organisations are struggling to cope with a snowballing humanitarian crisis threatening to explode.

Hungary is building a fence to ward off refugees.  Slovakia says it will accept only Christian refugees, triggering a condemnation by the United Nations.

“We have to remember [refugees] are human beings. Often they have no choice but to leave their homes. And they must have unhindered access to basic human rights, in particular the right to protection and health care." -- Francesco Rocca, President of the Italian Red Cross
The crisis was further dramatized last week when the Austrians discovered an abandoned delivery truck containing the decomposing bodies of some 71 refugees, including eight women and three children, off a highway outside of Vienna.

Sweden and Germany, which have been the most receptive, have absorbed about 43 percent of all asylum seekers.

But in Germany, despite its liberal open door policy with over 44,000 Syrian refugees registered this year, there have been attacks on migrants, mostly by neo-Nazi groups.

The crisis is likely to get worse, with the United Nations predicting over 3,000 migrants streaming into Western Europe every day – some of them dying on the high seas.

The Office of the U.N. High Commissioner for Refugees (UNHCR) says more than 2,500 refugees have died trying to cross the Mediterranean into Europe this year.

British Prime Minister David Cameron has come under fire for dehumanizing migrants as “a swarm of people coming across the Mediterranean, seeking a better life, wanting to come to Britain”.

Harriet Harman, a British lawyer and a Labour Party leader of the opposition, shot back when she said Cameron “should remember he is talking about people and not insects” and called the use of “divisive” language a “worrying turn”.

The three countries with the largest external borders – Italy, Greece and Hungary – are facing the heaviest inflow of refugees.

The 28-member European Union (EU) remains sharply divided as to how best it should share the burden.

While Western European countries are complaining about the hundreds and thousands of refugees flooding their shores, the numbers are relatively insignificant compared to the 3.5 million Syrian refugees hosted by Turkey, Jordan and Lebanon

The New York Times Saturday quoted Alexander Betts, a professor and director of the Refugees Studies Centre at Oxford University, as saying: “While Europe is squabbling, people are dying.”

German Chancellor Angela Merkel says the EU is facing one of its worst crises ever, outpacing the Greek financial meltdown, which threatened to break up the Union.

In a hard-hitting statement released Friday, U.N. Secretary-General Ban Ki-moon said he is “horrified and heartbroken” at the latest loss of lives of refugees and migrants in the Mediterranean and Europe.

He pointed out that a large majority of people undertaking these arduous and dangerous journeys are refugees fleeing from places such as Syria, Iraq and Afghanistan.

“International law has stipulated – and states have long recognized – the right of refugees to protection and asylum.”

When considering asylum requests, he said, States cannot make distinctions based on religion or other identity – nor can they force people to return to places from which they have fled if there is a well-founded fear of persecution or attack.

“This is not only a matter of international law; it is also our duty as human beings,” the U.N. chief declared.

Meanwhile, international organisations, including the United Nations, have been calling for “humanitarian corridors” in war zones – primarily to provide food, shelter and medicine unhindered by conflicts.

Francesco Rocca, President of the Italian Red Cross, told IPS: “On our side, we ask for humanitarian corridors, respect for human dignity and respect for Geneva Conventions [governing the treatment of civilians in war zones] for reaching everyone suffering.”

Regarding people on the move – and people fleeing from these conflicts – “we have to remember they are human beings. Often they have no choice but to leave their homes. And they must have unhindered access to basic human rights, in particular the right to protection and health care,” he said.

Rocca said these people don’t want to escape; they love their homes, their teachers, their schools and their friends.

“But these are terrible stories of people who have been driven from their homes by violence in Syria, Sudan and other conflicts. For almost three years we have asked for humanitarian corridors,” but to no avail, he said.

“I strongly support the Red Cross EU Office position on migration and asylum in the EU, which clearly recommends respecting and protecting the rights of migrants whatever their legal status, respecting the dignity and rights of all migrants in border management policies, sharing responsibility in applying a Common European asylum system.”

As far as the Italian Red Cross and the International Federation of Red Cross (IFRC) are concerned, he said: “We urge for a humanitarian approach to tackling the vulnerabilities of migrants, rather than focusing on their legal status.”