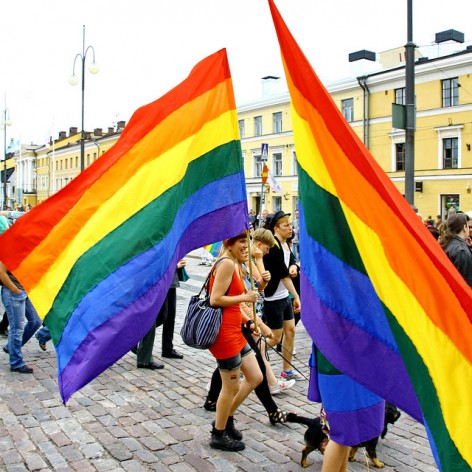 UNITED NATIONS, Aug 24 2015 (IPS) - The U.N. Security Council (UNSC), whose primary mandate is the maintenance of international peace and security, has occasionally digressed to discuss global issues such as climate change and HIV/AIDS.

But in a historic first, and at a closed-door meeting co-hosted by the United States and Chile, the UNSC took up the issue of LGBT (Lesbian, Gay, Bisexual and Transgender) rights – providing a platform for an Iraqi and a Syrian, both of whom escaped persecution by the radical Islamic State (IS) purely for their sexual orientation.

“In a world where there's homophobia and transphobia, the U.N. should lead by example." -- Hyung Hak Nam, President of UN-GLOBE, which represents lesbian, gay, bisexual, transgender and intersex (LGBTI) staff fighting for equality and non-discrimination in the U.N. system
The meeting took place Monday, under what is called the “Arria-formula”, named after Ambassador Diego Arria of Venezuela who initiated the practice back in 1992.

Described as “informal and confidential gatherings”, they enable Security Council members to have a frank and private exchange of views – but with no official commitments.

Security Council members are not obliged to attend or participate in these meetings, he pointed out. “Having said that, I think it is interesting” this debate was held, Dittrich added.

He said testimony given by people who experienced the IS attacks on human rights will draw attention to the atrocities perpetrated by IS against gay men – or men who are perceived to be gay.

“The debate will not end in the adoption of a UNSC resolution. For LGBT people in Iraq and Syria the importance of the debate lies in changes on the ground,” he argued.

“Will the debate lead to less human rights abuses against LGBT people? Or will heightened attention at the U.N. level lead to more targeted killings by IS?” he asked.

“I don’t have the answer, but I will be interested to hear what the panelists have to say about that,” said Dittrich.

He said the Office of the U.N. High Commissioner for Refugees (UNHCR) should take care that its staff members on the ground in Turkey and other countries, where LGBT asylum seekers flee to, will be sensitized to address the issue of homosexuality in a speedy and serious manner.

Too often, he said, HRW hears stories of asylum seekers who flee persecution because of their sexual orientation or gender identity, that their issues are ignored.

“This is something the U.N. could actually do. It would be a great outcome of the debate,” he noted.

It is therefore “absolutely unrealistic, impractical and irresponsible” to categorize any issue as having no implications for maintenance of peace and security, he said.

“I recall in the past, the Security Council has considered HIV/AIDS, climate change and serious violations of human rights.

“I also remember the Council issuing an agreed statement on the floods in Mozambique because the torrential flood water washed away many landmines from their original positions which were mapped by U.N. for demining,” said Chowdhury, who presided over Security Council meetings when he was the Permanent Representative of Bangladesh to the United Nations.

“Even when the core concept which ultimately became UNSC resolution 1325 was introduced to recognize women’s equality of participation at all decision-making levels during my Presidency of the Security Council in March 2000, I was criticized for overloading the Council agenda by introducing a ‘soft issue’ in the area of international peace and security and was pressurized not to push for a resolution on the issue, particularly by its permanent members,” Chowdhury said.

Of the 15 members in the UNSC, five are permanent (the United States, Britain, France, China and Russia) and 10 are non-permanent members elected for two-year terms on the basis of geographical rotation.

For the last 70 years, said Chowdhury, the Council has narrowly focused on state security and military strategies – not on human security, as the complexity of today’s global situation requires.

“This perspective has to change if the Council wants to be meaningfully effective in its decisions and actions,” he added.

Hyung Hak Nam, President of UN-GLOBE, which represents lesbian, gay, bisexual, transgender and intersex (LGBTI) staff fighting for equality and non-discrimination in the U.N. system and its peacekeeping operations, told IPS, “When I read reports of the horrible violence perpetrated by the Islamic State against LGBTI individuals, I think of the victims.”

There’s a long way to go before the U.N. mainstreams LGBTI issues into the way it operates, including in its employment policies, he added.

“I do hope the U.N. will move towards becoming a showcase for others of what full equality and inclusion for all, including LGBTI staff, looks like.”

“In a world where there’s homophobia and transphobia, the U.N. should lead by example,” he declared.

Javier El-Hage, chief legal officer at the Human Rights Foundation, told IPS his Foundation applauds UNSC member states Chile and the United States for their initiative to hold an ‘Arria-formula meeting’ highlighting the plight of LGBT people in territories currently controlled by IS (also known as the Islamic State of Iraq and Syria or ISIS).

ISIS, a terrorist organization currently committing numerous crimes against humanity and perpetrating a genocide against the Yazidi religious minority in Iraq and Syria, has already been condemned by the council repeatedly, he pointed out.

So, Chile and the U.S. are now taking the opportunity to highlight ISIS’s barbaric crimes against a particular minority that is deliberately ignored or discriminated against by several authoritarian governments that sit on the U.N. Security Council, El-Hage said.

Many U.N. Security Council permanent and non-permanent member states are themselves notorious for either repressing LGBT people domestically or blocking LGBT rights advocacy internationally, he noted.

Putin’s Russia, for example, bans the discussion of LGBT rights in the public sphere as “gay propaganda,” while China usually teams up with dictatorships at the U.N. to exclude from the text of U.N. resolutions language that recognizes LGBT people as a minority especially vulnerable to, for example, extrajudicial executions.

Similarly discriminatory of LGBT people in their countries are non-permanent members Chad, Angola, Nigeria, and Malaysia, he added.

“Thanks to the symbolic move by the U.S. and Chile, today they are all being forced to sit through a meeting to address an issue that they would rather avoid,” he declared.