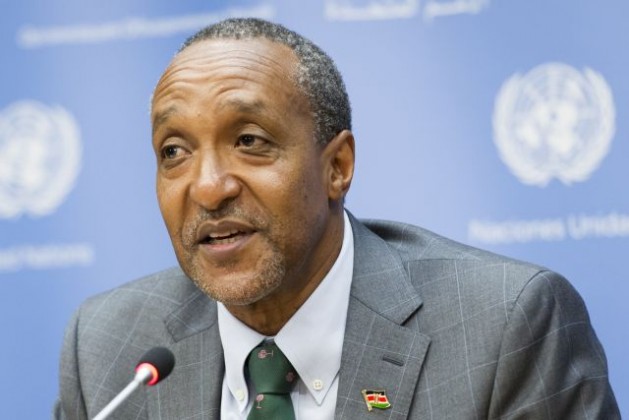 Macharia Kamau, Permanent Representative of the Republic of Kenya to the U.N., addresses a press conference on the agreement achieved on 2 August by Member States on the outcome document of the United Nations Summit to adopt the post-2015 development agenda. Credit: UN Photo/Mark Garten

UNITED NATIONS, Aug 3 2015 (IPS) - After more than two years of intense negotiations, the U.N.’s 193 member states have unanimously agreed on a new Sustainable Development Agenda (SDA) with 17 goals — including the elimination of extreme poverty and hunger — to be reached by 2030.

At a press briefing Monday, Ambassador Macharia Kamau of Kenya, one of the co-facilitators of the intergovernmental consultative process, told reporters the implementation of the agenda could cost a staggering 3.5 trillion to 5.0 trillion dollars per year.

“Women and girls everywhere have much to gain from the SDGs. But to make this a reality, we have to keep pressure on governments to follow through on their commitments." -- Shannon Kowalski

This looks like “an astronomical figure”, he said, compared with the hundreds of billions of dollars – not trillions – the United Nations has been traditionally seeking for development aid.

“It is ambitious, but not unattainable,” he said, and could come mostly from domestic resources, both public and private.

“All countries have to rise to the occasion,” he said, adding that it was imperative for the business sector to get on board.

Still, the U.N. Under-Secretary-General for Economic and Social Affairs Wu Hongbo of China struck a more cautious note when he told reporters “it will be very difficult to give specific figures.”

But all 193 member states, he said, are expected to mobilise domestic sources to help attain the 17 Sustainable Development Goals (SDGs). https://sustainabledevelopment.un.org/post2015

The SDGs are a successor to the eight Millennium Development Goals (MDGs), which were approved by heads of state in 2000, and will end in December this year.

The new goals, which will be part of the U.N.’s post-2015 development agenda and to be approved at a summit meeting of world leaders Sep. 25-27, cover a wide range of political and socio-economic issues, including poverty, hunger, gender equality, industrialisation, sustainable development, full employment, human rights, quality education, climate change and sustainable energy for all.

Jens Martens, director of the Bonn-based Global Policy Forum, who has been closely monitoring the negotiations, told IPS the new Sustainable Development Agenda is a compromise and the result of a painful consensus building process.

“The new Agenda is unique, as it is universal and contains goals and responsibilities for all countries in the world, including the rich and powerful,” he noted.

The Agenda addresses the raising inequalities within and among countries and the enormous disparities of opportunities, wealth and power, Martens pointed out.

Some of the new Sustainable Development Goals (SDGs) are highly ambitious, like the first goal to end poverty in all its forms everywhere.

However, the Agenda is far less ambitious when it comes to the means of implementation, he warned.

“The implementation of the SDGs will require fundamental changes in fiscal policy, regulation and global governance. But what we find in the new Agenda is vague and by far not sufficient to trigger the proclaimed transformational change. But goals without sufficient means are meaningless,” he declared.

Bhumika Muchhala, senior policy analyst, finance and development at the Third World Network, told IPS the SDGs are indeed significantly more ambitious than the MDGs, but that much of this money is going to come from two key sources.

One, private money, through the “multi-stakeholder partnerships” that the U.N. has enshrined in the SDG Goal 17 as well as through various other processes, such as the Sustainable Energy for All initiative or the Global Financing Facility.

And second, from domestic money straight from developing country coffers, as no new international money is being committed.

She said the glaring absence of any intergovernmental process or model of governance over these proliferating multi-stakeholder partnerships renders them void of accountability and transparency, much less rigorous due diligence practices such as ex-ante and independent assessments, monitoring and oversight and third-party evaluation processes.

Such provisions and principles, she noted, are even integrated into the World Bank Group’s architecture, where the Ombudsman and even the IEO (Independent Evaluation Office) in the IMF serve as monitoring agencies.

For example, it has been demonstrated that the decision-making taking place in a fund like the Global Financing Facility will be done behind closed doors, by a small group of elite financial investors and private sector actors who contribute to the Facility, she added.

With this new framework there is potential to really change the game and advance gender equality—which has been recognised as absolutely essential to sustainable development, she added.

“Women and girls everywhere have much to gain from the SDGs. But to make this a reality, we have to keep pressure on governments to follow through on their commitments. In the end, the promise of this historic development agenda is really up to us,” Kowalski declared.

Ian Koski, a spokesperson for the ONE Campaign, said the new global goals are a major landmark in the effort to end extreme poverty.

They lay out a global contract for a world where nobody lives in hunger or dies of preventable diseases, and while their formal adoption in September will rightly be cause for celebration, goals alone will not end poverty, he said.

“The monitoring of the goals will need a sharp focus on accountability, backed by investments in data collection and use so that citizens have the information they need to ensure that leaders keep their promises,” Koski declared.

“This is the People’s Agenda, a plan of action for ending poverty in all its dimensions, irreversibly, everywhere, and leaving no one behind. It seeks to ensure peace and prosperity, and forge partnerships with people and planet at the core.”

He said the integrated, interlinked and indivisible 17 Sustainable Development Goals are the people’s goals and demonstrate the scale, universality and ambition of this new Agenda.

Ban said the September Summit, where the new agenda will be adopted, “will chart a new era of Sustainable Development in which poverty will be eradicated, prosperity shared and the core drivers of climate change tackled.”

Deon Nel, international acting executive director for conservation at World Wide Fund for Nature (WWF) said: “We congratulate negotiators on their bold action. This is an essential move toward realizing our dream of shaping a world where people, planet and prosperity come together.”

He said SDGs are universal goals that will commit all countries to take action both within their own borders and in support of wider international efforts.

Individual national commitments must add up to a worldwide result that helps all people and ensures a healthy environment.

He said the new development plan represents significant improvement from the U.N.’s MDGs as it recognises the interlinkages between sustainability of ecosystem services, poverty eradication, economic development and human well-being.