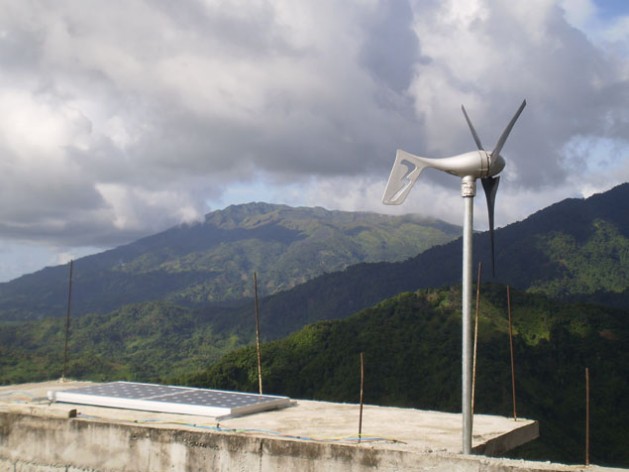 The high cost of electricity in the Caribbean is pushing many to install alternative energy sources. Credit: Zadie Neufville/IPS

KINGSTON, Jamaica, Nov 23 2015 (IPS) - Negotiators from the 15-member Caribbean Community (CARICOM) are intent on striking a deal to keep the global temperature rise at 1.5 degrees of pre-industrial levels, but many fear that a 10-year-old agreement to buy cheap petroleum from Venezuela puts their discussions in jeopardy.

Across the region, countries are rolling out their “1.5 to Stay Alive” Campaign to raise awareness about the effects of climate change, while building momentum for the region’s negotiating position ahead of the 21st Conference of the Parties (COP21) of the United Nations Conference on Climate Change (UNCCC) in France in December.

Some say the petroleum agreement could cause friction between member nations because of new incentives including assistance with healthcare and agriculture through a Caribbean Economic Development Zone. President of the Venezuelan Republic Nicolas Maduro pledged to maintain the PetroCaribe deal, a legacy of his late predecessor Hugo Chavez alive, while celebrating its 10th anniversary in Jamaica on September 9.

PetroCaribe is an alliance between 12 member states of CARICOM and Venezuela for the purchase of oil at market prices with between 5 and 50 per cent up-front payment. There is a grace period of one to two years for paying the balance or through financing over 17 to 25 years at 1 per cent interest if prices are above 40 dollars per barrel. Media reports say Maduro is negotiating with non-members of OPEC to keep oil prices stable in support of the pact.

While agreeing that PetroCaribe could be a disincentive for investments in domestic renewable energy, Alexander Ochs, Director of Climate and Energy at WorldWatch Institute noted, “Caribbean governments are increasingly aware of the enormous financial, environmental and social costs associated with continued dependence on fossil fuels.”

Caribbean SIDS are not major contributors to global warming and resulting climate change but are expected to bear the burden of the effects from the heat and rising seas: coastal flooding, more intense hurricanes, extended droughts, coral death and up to 50 per cent reduction in valuable marine species.

Head of the CARICOM Energy Unit, Devon Gardner, told IPS, “The region is still campaigning for 1.5 degrees Celsius with the understanding that other negotiators including the European Union are looking at 2.0 degrees.”

An agreement for any less than 1.5 some argue could mean the inundation of many nations and the loss of a critical infrastructure of others. Several member states are below sea level and most are island nations with limited land. In most states, critical infrastructures are located mainly along the coast and are already subject to flooding.

In 2013, the community adopted a regional energy policy to make renewables 48 per cent of their electricity generation by 2027 and a roadmap was drawn up to guide the process.

“Even if the problem of global warming did not exist, and the burning of fossil fuels did not result in extensive local air and water pollution, CARICOM would still have to mandate to transition away from these fuels as swiftly as possible for reasons of social opportunity, economic competitiveness and national security, ”said Ochs, one of the authors of the new Caribbean Sustainable Energy Roadmap and Strategy (C-SERMS) Baseline Report and Assessment, launched on October 28.

Most CARICOM states spend up to half of their earnings on petroleum products but get less energy than they need. WorldWatch Data from 2013 shows the region generating an estimated 18,369 gigawatt-hours (GWh) of electricity and consuming about 20,776 GWh. Investments are, however helping to keep the region on track to reduce their dependence on fossil fuel, reduce emissions and cut electricity costs.

In Jamaica where electricity costs four times as it does in the US, more than 200 million dollars has been invested to add 115 mega watts of alternative energy to the grid. The aim is to reduce petroleum-generated electricity by 30 per cent by 2020. On September 19, the island’s single electricity retailer Jamaica Public Service Company signed 20-year ‘power purchase agreements’ to add 78 MW of renewable energy to the grid.

Even with additional investments in renewables, the US continues to see, PetroCarib as a contradiction of regional efforts to reduce carbon emissions and keep temperatures down.

“There is no reason why countries from this region should be relying on dirty fuels supplied largely by one country when there is an abundance of sun, wind, geothermal and natural gas capability,” US Energy Bureau envoy Amos Hochstein told reporters at the Caribbean Renewable Energy Forum (CREF) held in Florida in October.

Ochs and Jamaica’s Junior Minister for Energy Julian Robinson are confident that in the long run, energy security and the positive spin off from sustainable energy solutions will influence the region’s long-term goals.

“The falling cost of renewable energy technologies as well as government policies will make these energy alternatives attractive for investors and ordinary people,” Robinson said.

Ochs noted, “In tandem with renewable energy technologies, it will be important for countries to look towards investing in more energy efficiency and conservation projects. Energy efficiency measures are often both the cheapest and fastest way to lessen the environmental and economic costs associated with a given energy system.”

Member states attending the UNCCC negotiate within the CARICOM framework and as a bloc as part of the Alliance of Small Island States.

21st Conference of the Parties (COP21) of the United Nations Conference on Climate Change (UNCCC) http://www.cop21paris.org/about/cop21