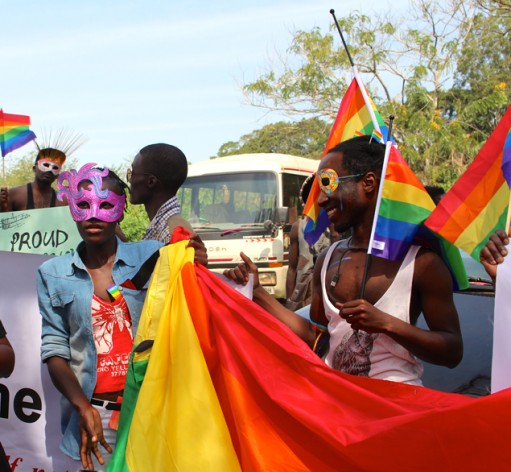 Participants at a gay pride celebration in Uganda in August. Credit: Amy Fallon/IPS

KAMPALA, Uganda, Nov 24 2015 (IPS) - This week Pope Francis is making his first trip to Africa in his as leader of the Catholic church. While mass excitement is building in the three host countries, Kenya, Uganda and the Central African Republic (CAR),among people of all religions not everyone is in the mood to celebrate.

Sandra Ntebi, 33, a gay Ugandan “human rights defender,” lives on the outskirts of Kampala where the Pope will meet local residents. Papal routes have been paved and lit for the tour. But one group in the area has been telling Ntebi, “they must clean up the roads because of the homosexuals.”

Ntebi admitted she “liked” the current Pope as she thought he was more liberal than others.

“I think he’s trying to play his game right. He wants to act open-minded,” she told IPS.

But she added, “whether he comes or doesn’t come, it does not count to me.”

It has been a turbulent few years for Uganda’s gay community, with a harsh anti-gay law struck down by a court over a year ago. MPs have since vowed to introduce new legislation.

The Uganda Anti-Homosexuality Act, 2014 was passed by the Parliament of Uganda on 20 December 2013 with life in prison substituted for the death penalty. The bill was signed into law by the President of Uganda in February 2014 but then the Constitutional Court of Uganda ruled the Act invalid on procedural grounds.

If the Act had taken effect it would have broadened the criminalisation of same-sex relations in Uganda. Same-sex relationships have been illegal in Uganda since British colonial rule — as they are in many sub-Saharan African countries — and before this Act was passed, they were punishable by incarceration in prison for up to 14 years.

Uganda remains a largely homophobic country, and one of the country’s presidential candidates in next year’s election has vowed to “rehabilitate homosexuals” if he wins office. Ntebi said ahead of the polls she was taking extra precautions and keeping a low profile.

In the lead-up to the Papal tour, there is speculation whether Pope Francis will address Uganda’s gay rights issue. Many activists have called for him to talk about the issue in explicit terms.

Pepe Julian Onziema, a transgender man and activist, told IPS the Pope had the opportunity to “clearly stress the need for compassion, inclusion, and a sense of shared humanity.”

Ntebi may be in the minority who don’t want the Pontiff to speak out, fearing it could “trigger” the local media and others into vilifying gays. Either way, the campaigner, a former Pentecostal and Seventh Day Adventist who has now “given up” all religion, said, “I don’t think he will.”

The chairperson of the Uganda Episcopal Conference, the church’s in-country apex assembly, Gulu Archdiocese Archbishop, John Baptist Odama, told IPS that during the visit, he didn’t expect Pope Francis to address the topic in specific language.

“I don’t think really that is his main concern,” said Odama.

“We had already talked about this… and it was clearly stated let us teach the teaching of the church which says… the context of marriage is for a man and a woman, and the end result is procreation and the promotion of humanity.”

But Odama stressed that Pope Francis “cares about the people, in what condition they live,” and how through God’s words he can give Ugandans “hope and encouragement.”

Arriving in Uganda on the evening of November 27th, the Pope is expected to be greeted at Entebbe airport by the country’s President Yoweri Museveni, bishops and thousands of well-wishers. He will then meet the nation’s leader, who officially invited the Pontiff to the East African country in December 2014, at State House.

Pope Francis visit’ coincides with Uganda’s election campaigns. Officially they began two weeks ago. As has happened in previous elections, any opposition aspirants and figures have been regularly detained. Even now Museveni looks set to firmly mark three decades in power in 2016.

Human Rights Watch (HRW) recently warned against “police brutality,” stressing that “Ugandans should be able to attend rallies, listen to all candidates in person or on the radio, and express their views without reluctance or fear.”

“The visit to Uganda comes at an important time, with elections coming soon and the presidential campaigns under way,” Maria Burnett, Senior Africa Researcher at HRW, told IPS, adding ahead of the visit they had written to the Vatican to encourage the Pope to “raise a number of human rights issues that we believe are of mutual concern.”

“It’s a critical moment for the Pope to urge President Museveni to respect free expression and assembly rights, including for those with whom the ruling party disagrees,” Burnett told IPS.

But as with the gay rights issue, Odama said the Pontiff was not expected to “indulge himself in politics as a church leader of an international level.”

“These are messages the church preaches anywhere and at any time.”

While the Pope’s doing this at various venues in and around Kampala during the “Apostolic Voyage,” Ntebi said she will “be at home chilling and drinking.”

“Why would I watch him? For security reasons I don’t want to involve myself in such (activities).”

The African tour begins in Kenya on November 25th, where the Pope will meet with the president, civil authorities and diplomatic corps, visit the United Nations as well as a slum in Nairobi, all through the 27th, according to a statement posted on the Vatican Radio website.

Pope Francis’ main purpose of visiting Uganda is to lead celebrations to mark 50 years of the canonisation of 22 Catholic Uganda martyrs by Pope Paul VI in 1964, according to the government and church here.

While in Uganda he will conduct a mass and “short meditation prayer” at shrines to commemorate martyrs – Catholics and Anglicans – burned alive in the late 1880s for refusing to denounce their Christian beliefs.

The Pope also plans to meet with the youth, sick and disabled, bishops and other clergy.

The Papal tour departs from Uganda early on November 29 for (CAR), where Francis will visit a refugee camp and stay until the 30th.