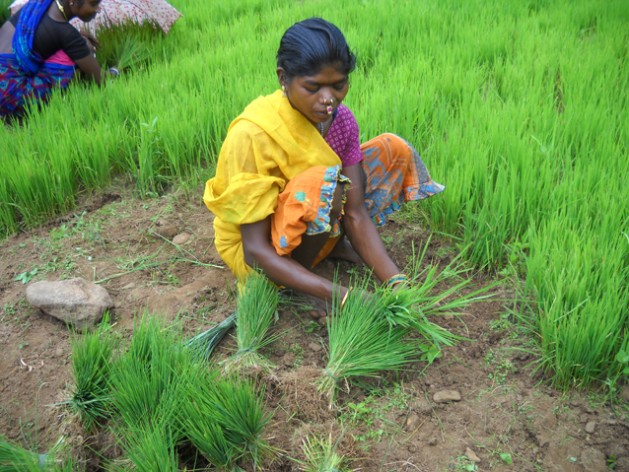 NEW DELHI, Dec 2 2015 (IPS) - “If you look at the submitted Intended Nationally Determined Contributions (INDCs, the national commitments to cut greenhouse gas emissions by 2030) by over 150 countries, most have announced mitigation-centric targets, whereas climate change is also about adaptation. India is among the few that has given a comprehensive INDC,” Ashok Lavasa, a key official of India’s Ministry of Environment, Forest and Climate Change and part of its COP21 team at Paris, told IPS.

A new report by Delhi-based non-profit Centre for Science and Environment (CSE) bears out India’s demand at COP 21 for resources to adapt. The CSE report finds in 2013, five states were impacted and 0.35 million hectares of standing crops affected which in 2014 increased to six states being affected, and 5.5 million hectares of crops, just a month away from being harvested, were damaged. In 2015, as many as 15 states were hit and 18.23 million hectares or one-third of cropped area was damaged. The losses to farmers were in excess of 4 billion dollars.

Around 62 per cent of India’s people depend on agriculture. Six out of ten farmers depend on rain for irrigation and at high risk to the vagaries of changing weather patterns.

Mankombu Sambasivan Swaminathan, a prominent 88-year-old geneticist known as the father of India’s Green Revolution of the 1960s, said the impact of weather events on agriculture was indicated by the fact that India recently imported 10 million tonnes of pulses. “Fifty years ago when India started the green revolution, it was importing 10 million tonnes of wheat. We seem to be back to the same situation because of climate change,” he said.

According to a new United Nations Office for Disaster Risk Reduction (UNISDR) report, The Human Cost of Weather-Related Disasters 1995-2015, says in the last 20 years there have been 6,457 floods, storms, heat waves, droughts and other climatic events. Asia bore the brunt of these mainly due to its large and varied landmass, including multiple river basins, flood plains and other zones at high risk from natural hazards, plus high population densities in disaster-prone regions.

Over this period, 805 million Indians have been affected out of 4.1 billion people globally.

Overall, annual economic losses from disasters globally are estimated by UNISDR at between 250 billion and 300 billion dollars.

Underscoring the need for resources by developing countries to adapt to climate change, Lavasa said, “India being a developing economy, there are lots of demands on its resources. To bring people above the poverty line India has to provide vast numbers of rural employment, education for all, provide basic healthcare and safe housing, provide for the huge road connectivity deficit that still cut off rural areas. Add to these energy access that a third of India’s mostly rural population is deprived of. All these require huge resources.”

According to UN Food and Agriculture Organisation, India has 194 million or a quarter of the undernourished population in the world. India has to tackle this huge problem of food security even while 25 per cent of its total land area is undergoing desertification and 32 per cent facing degradation owing to droughts and soil erosion that are impacts of climate variability. India today has a total of around 100 million hectares officially classified as degraded land.

India’s experience with adverse consequences of climate change goes beyond the vulnerable farm sector. “India has more than 7,000 kilometres of coastline with as much as 15 per cent of its total 2.28 billion population. These are regions where the poorest people reside and face the fury of cyclones and tsunamis. India also has more than 1,200 islands that are equally vulnerable like small island nations,” Lavasa said, adding that 12 or one-third of Indian states are in the Himalayan range affected by glacier melts, which are also affecting India’s major water sources.

“So the argument which has been made by India for the COP21 climate deal is that because of its diverse and acute vulnerability, India is keen to act, but it has always said that because these problems have been created historically by the action of many other countries and now there is a realization that it is a global problem. Therefore not only has there to be a global resolve to solve the problem but there have to be global resource to solve it,” Lavasa told IPS.

“The negotiators at the climate talks in Paris, need to be mindful of the impact of changing climate on agriculture, and the devastating consequences it has on farmers as well as the food security prospects of the world,” said CSE’s Chandra Bhushan.

The CSE report is also a peek into the future—what we should expect as our planet continues to heat up due to the incessant increase in greenhouse gas emissions,” Bhusan added.