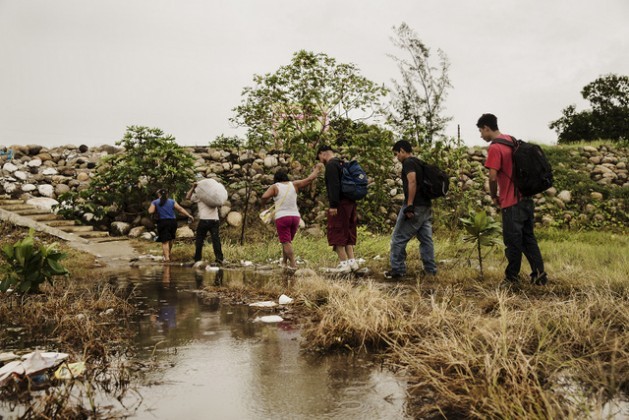 A group of Central American migrants walking along a trail in the southern Mexican state of Chiapas, on the border with Guatemala, at the start of their long journey across Mexico on their way to the United States. Credit: Courtesy Médecins Sans Frontières – Mexico

MEXICO CITY, Jan 25 2016 (IPS) - The Mexican government’s decision to grant humanitarian visas to Cuban migrants stranded in Costa Rica contrasts sharply with the poor treatment received by the tens of thousands of Central American migrants who face myriad risks as they make their way through this country on their long journey to the United States, social organisations and activists complain.

Although migrant rights activists put the greatest blame on the United States, complaining that Cuban immigrants are given privileged treatment across the border, they also accuse Mexico of fomenting the differences.

Washington “promotes the irregular migration of Cubans,” activist Danilo Rivera told IPS from Guatemala City. “They have double standards, and Mexico plays into their interests. It contradicts the goal of achieving orderly, safe migration flows.”

“Mexico isn’t coherent, because it’s a country that produces migrants itself,” said Rivera, with the Guatemala-based Central American Institute for Social Studies and Development (INCEDES).

INCEDES belongs to the Regional Network of Civil Organisations for Migration (RROCM), which studies these issues and works with governments on immigration policies.

The 1966 Cuban Adjustment Act, known as the “wet foot-dry foot policy”, grants Cuban immigrants U.S. residency one year and a day after they reach the country, regardless of whether their entry was legal or illegal.

Mexican Migrants in the U.S.

Tens of thousands of undocumented Mexican migrants also head to the United States. The Mexican authorities bitterly complain about the poor treatment this country’s citizens are given across the border, while they provide similar treatment to Central American immigrants here, human rights activists argue.

In a study published Jan. 20, the Center for Migration Studies of New York (CMS) reported that the number of undocumented immigrants in the United States fell to 10.9 million in 2014, from 12 million in 2008.

Six million of the undocumented immigrants in the country are from Mexico. But CMS Executive Director Donald Kerwin said the Mexican-born undocumented population was about 600,000 smaller in 2014 than in 2010.

The report also said that between 1980 and 2014, the population of Mexican-born legal residents grew faster than the number of undocumented Mexicans.

The previously little-known route taken by Cubans from Ecuador to the United States drew international attention in November, when nearly 8,000 Cubans found themselves stuck at Costa Rica’s border with Nicaragua, after the government in Managua refused to let them in the country.

A solution to the crisis was negotiated and the governments of Costa Rica, El Salvador, Guatemala and Mexico agreed to put an initial group of 180 of the migrants on a charter flight from Costa Rica to Guatemala – thus avoiding Nicaragua – as part of a pilot plan that got underway on Jan. 12.

The next day, the 139 men and 41 women were taken by bus to the southern Mexican state of Chiapas, on the border with Guatemala.

With the special humanitarian visas issued by the Mexican government’s National Migration Institute (INM), the Cubans were able to cross the country on their own, without being stopped by the migration authorities.

After the success of the test flight, the four governments involved in the negotiations agreed in a meeting in Guatemala to carry out more flights, after Feb. 4.

The possibility of issuing humanitarian visas is provided for in Mexico’s 2011 National Migration Law. The permits can be granted for a duration of 72 hours to 30 days, in cases where migrants are victims of a natural catastrophe, face danger in their country of origin, or require special treatment due to health problems.

In November, the last month for which official data is available, Mexico granted 1,084 humanitarian visas: 524 to Hondurans, 370 to Salvadorans, 146 to Guatemalans, 43 to Nicaraguans, and one to a Costa Rican.

An estimated 500,000 undocumented migrants from Central America cross Mexico every year in their attempt to cross the 3,185-km border separating Mexico from the United States, according to estimates from organisations that work with migrants.

“Political negotiations, and a state of servitude to the United States, were behind the way the Cuban migrants issue was handled. The Cubans have everything in their favour; the Central Americans have nothing,” said Pantoja, the director of the Belén Posada del Migrante migrants’ shelter in Saltillo, the capital of the northeast Mexican state of Coahuila, which borders the United States.

The activist also complained about the “unequal response” by the Central American governments, which showed solidarity with the Cuban migrants while being “so insensitive, distant and utilitarian” towards migrants from Central America itself.

On their way across Mexico, Central American migrants face the risk of arbitrary arrest, extortion, theft, assault, rape, kidnapping and murder, at the hands of youth gangs and people trafficking networks, as well as corrupt police and other agents of the state.

Defenders of migrant rights have asked Mexico to issue humanitarian visas to minimise these risks.

And in an August report, the Inter-American Commission on Human Rights’ Rapporteur on the Rights of Migrants also urged the government to issue humanitarian permits.

“We have called for a stop to the deportations. Mexico needs to make progress towards protecting migrants in transit, using safe-conduct passes to keep them from going through dangerous areas and to help them to avoid criminal groups. But the United States does not want the border area to become the impact zone,” Rivera said.

Activists blame the Southern Border Plan, implemented since August 2014 by the Mexican government with U.S. support, for the offensive against undocumented immigrants. The plan included the installation of 12 naval bases on rivers in the area, and three security cordons using electronic sensors and other security measures to the north of Mexico’s southern border.

The flow of Cubans without visas through Central America and Mexico to the United States is not likely to let up, even though in December the Ecuadorean government once again began to require a letter of invitation and other requisites to enter the country, after giving Cubans free access since 2014.

In September, the Costa Rican government reported that it had detained 12,000 undocumented Cubans in the previous 12 months.

Migrant rights activists plan to demand a response from Mexico regarding its double standards towards immigrants.

“We are not going to sit still. We’re going to demand that the INM (National Migration Institute) be held to account,” said Pantoja, a member of the INM’s Citizen Council, made up of representatives of civil society and academia.

Immigrant rights organisations will meet Jan. 25-28 in Chiapas and the neighbouring state of Tabasco to study the phenomenon and monitor migration flows and the performance of the local authorities.

They will also question the INM during the Citizen Council’s March session.