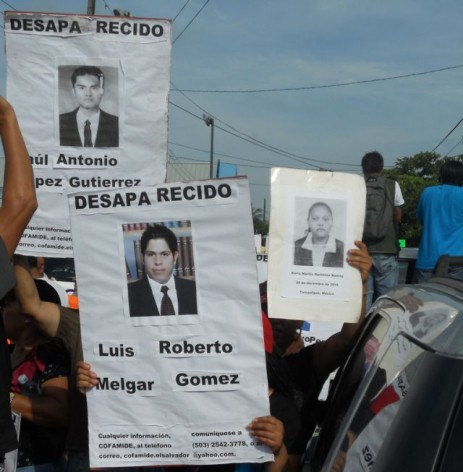 Those are the last words Eva Nohemi Hernández Murillo told her mother, Elida Yolanda, through a patchy phone line on the evening of Aug. 22, 2010.

The 25-year-old from Honduras was about to get into a van that would, she hoped, take her and 72 other men and women across the Mexican border to the U.S.

Eva Nohemi wanted to arrive in what for her was the “promised land” to find a job that would give her enough money to support her parents and three young children back in El Progreso, in Honduras. But she, and all of her travel companions, but one, never made it.

Two days later when Elida sat in her living room to watch the evening news, her worst nightmare was realised.

The image of the lifeless bodies of 72 men and women filled the screen – the victims of what has come to be known as the first massacre of San Fernando. She recognised the clothes on one of them as belonging to her daughter.

“The next day we bought the newspapers to see if we could confirm it was her from the pictures. I felt it was her but was not sure, no one wants to see her daughter dead like that,” Elida said.

The only information about how the massacre unfolded came from the testimony of its sole survivor – who since then has felt terrified for his life after receiving numerous death threats.

Elida didn’t have enough money to travel to Tegucigalpa, the Honduran capital, to demand more information or action from the Mexican embassy there. No one contacted her either.

It was only when a human rights organisation reached out to the family that the investigations started gathering pace.

Another agonising two years passed by before Elida received a call from the Mexican embassy in Tegucigalpa with the confirmation that Eva Nohemi was dead.

“I went into shock. I suspected it was her but you never want to accept that your daughter is dead. Like Eva Nohemi, people are dying on that route all the time. All I want is justice so that this does not happen again,” she said, shaken.

Elida is not alone.

The massacre of San Fernando, which took place five years ago today, provides a glimpse into a shocking crisis that had been lurking for years.

Men, women and children desperate for better opportunities or under death threats by criminal gangs in violent-ridden Central America embark on this dangerous journey with little left to lose but their lives.

Criminal gangs, some of them believed to be working in collusion with local Mexican authorities, attack the migrants along the way. Women are kidnapped and trafficked into sex work. Men are tortured and many of them are kidnapped for ransom.

Few make it to the border without having suffered any human rights abuse; many go missing on the way, never to be found again.

The shocking figures only begin to tell their story.

Six months after the San Fernando massacre, another 193 bodies were found in 47 mass graves in the same town. A year after that, 49 dismembered torsos, believed to be from undocumented migrants, were found in the city of Cadereyta, in the neighbouring state of Nuevo León.

In 2013, a forensic commission made up by the relatives of the migrants, human rights organisations, forensic anthropologists and government officials took on the task of starting to identify the remains from these massacres.

According to official figures from Mexico’s National Institute of Migration (INM), between 2013 and 2014, abductions of migrants increased tenfold, with 62 complaints registered in 2013 and 682 in 2014.

But Mexico’s disappeared are invisible.

Or at least the authorities look the other way. Meanwhile the stories of death and suffering continue to pile up.

A few days after the San Fernando massacre, then Mexican President Felipe Calderón promised to implement a coordinated plan to end kidnappings and killings of migrants.

Five years on, there’s little to show for this.

In a recent visit to Washington, he was quick to congratulate President Barack Obama’s plan to protect millions of undocumented migrants living in the U.S. from deportation, describing it as an “act of justice”. At the same time, he has done remarkably little to tackle the abuses against migrants occurring in his own country.

There are no magic formulas to resolve this complex tangle of crime, drugs, violence and collusion, but there’s certainly much more than the Mexican authorities can and must do to end it.

Committing more and better resources to undertake effective investigations into these massacres and providing protection to the thousands of migrants crossing the country are two measures that cannot be delayed any longer.

Doing so will send a strong message that Mexican authorities truly do want justice for migrants. We already know the macabre consequences of not doing enough.