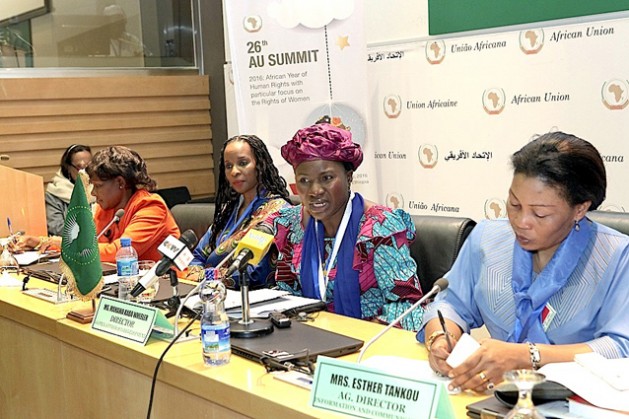 CAIRO, Feb 1 2016 (IPS) - Despite the enormous challenges facing Africa now, the leaders of its 1.2 billion plus inhabitants have decided to spotlight the issue of Human Rights With a Particular Focus on the Rights of Women in their 26th summit held in Addis Ababa on 21-31 January this year. Why?

In an interview to IPS, Mahawa Kaba Wheeler, Director of Women, Gender and Development at the African Union Commission (AUC), explains that time has come to act to alleviate the multitude of barriers to gender equality: “These include, among others, economic exclusion and financial systems that perpetuate the discrimination of women; limited participation in political and public life; lack of access to education and retention of girls in schools; gender-based violence, harmful cultural practices, and exclusion of women from peace tables either as lead mediators or part of negotiating teams of conflicting parties,” she argued.

The African Union believes that removing these barriers that impede women from fully enjoying their human rights can empower the continent, she added. Asked about women’s social, economic and political role in the continent, the Director of Women, Gender and Development says that Africa is at a turning point emerging as “one of the fastest growing developing regions in the world, registering economic growth levels ranging from 2 per cent-11 per cent.”

“Women make enormous contributions to economies, whether in business, agriculture, as entrepreneurs or employees, or by doing unpaid work at home. But they also remain disproportionately affected by poverty, discrimination and exploitation,” explained the Director. 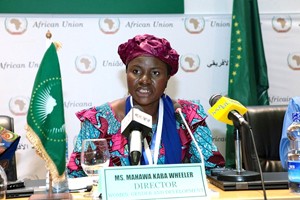 Women’s socio-economic disadvantages are reflected in pervasive violence, gender inequalities in earned income, property ownership, access to services including health and education as well as time use. To date, women in Africa, like women elsewhere, have not been included as full, equal and effective stakeholders in processes that determine and impact on their lives, Kaba Wheeler said.

“For example, women continue to have less access to education than men; they have less employment and advancement opportunities; their role and contribution to national and continental development processes are not always recognised nor fully rewarded; and they continue to be conspicuously absent from crucial decision-making positions,” she elaborated.

Kaba Wheeler also explained that the focus on these rights is an opportunity for the AU to take stock of how far it has come in addressing some of the impediments to women’s full enjoyment of their human rights.

This is also meant “to assess the extent of implementation of its gender and women’s rights instruments, consolidate the gains already made over the years and consider future priority areas of action to accelerate the effective and efficient implementation of commitments made on gender equality and women’s empowerment, ” she stated.

Kaba Wheeler recalls that the theme for the 26th African Union Summit in January 2016 derives from the declaration of 2016 as the “African Year of Human Rights, with a Particular Focus on the Rights of Women,” as this year marks “important milestones” in the continental and global women’s agenda for gender equality and women empowerment.

Among others, continentally, it is the 30th anniversary of the coming into force of the African Charter on Human and People’s Rights in 1986 and the beginning of the second phase of the African Women’s Decade 2010-2020.

“Globally, 2016 commemorates 36 years since the adoption of The Convention on the Elimination of all Forms of Discrimination Against Women (CEDAW), described as the international bill of rights for women, and the 21st anniversary of the 1995 Beijing Declaration and Platform for Action, which is the key global policy on gender equality.”

Regarding the main reasons why African women still face such huge hurdles, Kaba Wheeler cited a number of factors that create barriers between the present condition and gender equality in Africa: “Key amongst those is that African culture is largely patriarchal. Because of this, family control and decision-making powers belong to males. Since decision-making powers belong to males, the ability to make policy as well as the power to influence social norms also belongs to males.”

Consequently, she adds, “the male policy makers often maintain a firm grip on the traditional, gender-specific roles. This creates a sort of self-serving cycle, from which Africa is not yet free. Not unlike the women in many western states, the traditional role of women in Africa is that of the home-maker.”

As for women’s political participation in Africa, Kaba Wheeler explained to IPS that a huge progress has been made in the participation of women in politics since the transformation of the Organization of African Unity to the African Union.

But while Rwanda is the world leader in women’s parliamentary representation, it is lagging behind when it comes to women in executive positions. It is overtaken by Cape Verde, which has the highest number of women occupying ministerial positions in Africa. Out of 17 government ministers in Cape Verde, 9 are women, amounting to 52.9 per cent representation, Kaba Wheeler adds.

“It should also be noted that out of 54 African Heads of State and Government, three are women – the President of Liberia, Ellen Johnson Sirleaf; the President of Mauritius, Ameenah Gurib-Fakim, and the Interim President of the Central Africa Republic, Catherine Samba Panza.”

In this regard, Kaba Wheeler explains that the AU envisions a 50 per cent representation of women in decision-making and member states are expected to use that as the yardstick. On that note, the AU adopted the gender parity principle at its first summit in 2001.

“To date, the AU is the only multilateral body that has maintained gender parity at its topmost decision-making level. In addition to the chairperson of the AUC, there are five women and five male commissioners and efforts are made to allow for the gender parity principle to percolate other AU organs and institutions such as the African Commission on Human and People’s Rights as well as the African Court- where women are in the majority, ” according to Ms Wheeler.

The AU recognises that, with women being half of the African population, achievement of gender parity would create a ripple effect through many sectors of society as more women would be inspired to aim for leadership positions.

“Not only would having women in leadership positions lead to a better quality of life for women themselves, but also for their families in general and children in particular. There can be no true democracy in a country where women are underrepresented in decision making positions,” she emphasised.

But while acknowledging the great strides that have been achieved in women’s political participation, women still continue to experience significant discrimination related to their participation in public and political life.

In some AU member states, she adds, national legislation and constitutions adversely affect women’s participation in public and political life by limiting their participation through exclusionary or discriminatory clauses.

“In Africa, structural impediments to gender equality are embedded within the constitutional texts, containing provisions that specifically subjugate constitutional equality to religious principles or exclude family and customary law from constitutional non-discrimination.”

Although many of the same constitutions articulate a commitment to gender equality, the exclusion of personal or customary law from constitutional protection can severely undermine that commitment to equality, because many issues that commonly affect women are located within the legal spheres regulated by these customary and personal legal systems, Kaba Wheeler underlined.

Asked to further develop on the situation of African women whose role is key in the field of food production, agriculture and food security, Kaba Wheeler explains that their contribution does not match the benefits they derive from the sector in general and little investment is directed to benefit them.

“While African women produce more than 60 per cent of agriculture, constitutes over 50 per cent of the rural population and remain the main custodians of food security, there is very little investment in their lot to yield commensurate results, tap their resources and help them unleash their potential.”

Although they spend 80 per cent of their time either in agricultural production and auxiliary process including informal sector business, their contribution to food production, family care and welfare activities as well as in the informal sector is not captured in the Gross Domestic Product (GDP) and unaccounted for in the Statistics of National Accounts, says Kaba Wheeler.

In that regard, she adds, even when they produce agricultural crops, they lack access to markets and loose most of their outputs between the farm and the market through wastage, or sell their produce to middle men at a throw away price due to the high transportation costs.

“Because of the majority of women do not own land, they produce the bulk of the agricultural produce as tenants on the land they still have no land rights on the land and also no inheritance rights.”

Access to land for women remains one of the critical impediments to women’s economic, social and political empowerment in Africa.

According to the Seventh Report of the AUC Chairperson on the Implementation of the AU-SDGEA (Solemn Declaration on Gender Equality in Africa), African women own roughly 1 per cent of the land, despite farming and producing most of the food from the land.

Dual application of laws-customary and civil/common laws, conflict of various laws, as well as inadequate harmonisation of family laws- in relationship to marriages and inheritance, land rights, and property laws is a major issue across Africa, Kaba Wheeler explains.

On the other hand, the lack of equal opportunity in education, particularly higher education is responsible for the low levels of women in the job market, including in the formal agricultural sector… Most of the women in the job market occupy low cadre job which earn little income compared to their male counterparts, says Ms Wheeler.

As a result, women have no disposable income and are not able to accumulate any savings and generate investible income. Majority of them are therefore, predominantly in the agricultural sector where they are predominantly involved in producing food for the family and the meagre income they generate from selling surplus food does not lift them from poverty. Women constitute the majority of people in our continent who live below US $1 a day.

Regarding women’s health, Kaba Wheeler explains that in Africa, gender related challenges manifest themselves in various ways including with unacceptably high maternal, new born and child morbidity and mortality: “Maternal health status is indeed a key indicator not only of the status of women but also of the health status (and well being) of society as a whole. The 2012 Status Report on Maternal New born and Child Health of the AU Commission noted that globally, more than half a million women die each year due to pregnancy and childbirth related causes. ”

Some specific data: 99 per cent of these deaths were identified to occur in developing countries, of which 50 per cent occur in Africa (specifically outside the North African region). For every death, at least another 20 women suffer illnesses or injuries related to childbirth or pregnancy.

“The lifetime risk of dying during pregnancy and childbirth in Africa (excluding North Africa) is 1 in 22 women, compared with about 1 in 8,000 women in the developed world. Furthermore evidence abounds that 80 per cent of those deaths could be prevented by simple, low-cost and quality interventions.”