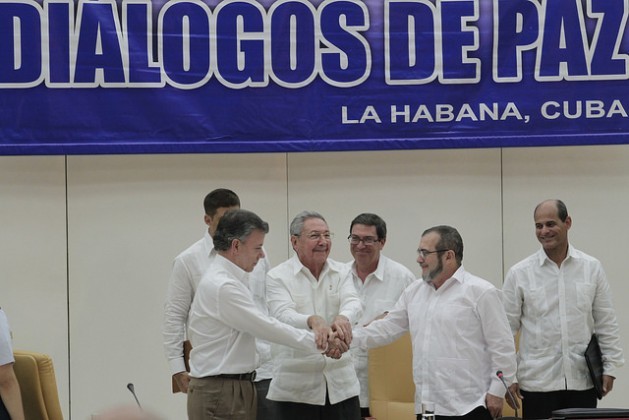 BOGOTA, Mar 25 2016 (IPS) - “It was not possible” to reach a final agreement with the Revolutionary Armed Forces of Colombia (FARC), the Colombian government’s lead negotiator, Humberto de la Calle, announced in Havana on Wednesday Mar. 23 – the deadline set for a peace deal.

As usual, there was no joint communiqué from the delegates of the so-called guarantors of the peace process, Cuba and Norway. Each delegation read a separate statement about the failure to meet the deadline set by the participants six months earlier.

“There are still major differences with the FARC on significant issues,” added de la Calle. The government does not accept FARC’s view of disarmament as “a process.”

“With weapons it is impossible to reintegrate into civilian life, the requirement for laying down arms must not have grey zones. Weapons and politics can’t be mixed,” he said.

On Thursday Mar. 24, the German government’s special envoy to the peace process, Tom Koenigs, said the new deadline would be the end of the year – a timeframe that could make it possible to get a smaller rebel group, the National Liberation Army (ELN), to join the talks.

Before Wednesday it was already clear that Colombian President Juan Manuel Santos and the FARC would not meet the Mar. 23 deadline to put an end to 52 years of armed conflict.

But at least an upbeat joint communiqué was expected, after U.S. Secretary of State John Kerry met Monday Mar. 21 with the heads of the two negotiating teams in the Cuban capital, and expressed his support for the talks, urging them to “redouble their efforts”.

Two weeks ago, the Colombian legislature approved a law on demobilisation of the guerrillas. During the bilateral ceasefire that would be put in place by a final peace deal, the rebels would hand over their weapons and remain in rural “concentration zones”, where government troops would not be allowed to enter and arrest warrants could not be executed.

In the demobilisation law, the government agreed to include demand by right-wing former president Álvaro Uribe (2002-2010): that the concentration zones must be in isolated areas with no civilian population.

But the FARC saw this as a step backwards.

According to the Latin American TV channel Telesur, the FARC want the arrest warrants against them to be suspended throughout the entire country, and they want to keep their weapons in containers inside the concentration zones, as a guarantee that the state will live up to the agreements.

Perhaps that is why Kerry decided to intercede in such a touchy issue, when he announced that the United States would be willing to help guarantee the security of the combatants once they hand in their weapons.

As one of the FARC negotiators, known by his nom de guerre Pablo Catatumbo, said early Wednesday, “no deal will be signed today because we have not been able to reach an agreement.”

“The challenges we are facing are difficult, we have not yet managed to agree on questions that are vital to putting an end to the conflict,” he told a group of journalists, including IPS, in Havana.

“There are very serious questions, such as the exacerbation of paramilitarism. In the last month, more than 28 community organisers, human rights defenders and peasant farmers have been murdered and their killers continue to enjoy impunity. This is very concerning,” he said.

“Solving the paramilitary problem the main challenge we are facing today, to help this process move ahead,” Catatumbo added.

“We have always been close to the civilian population. It’s inconceivable to ask the FARC today to stay in remote, inaccessible places, and to try to block us from having a relationship with the local population is frankly absurd,” he said, although he clarified that the idea is not to concentrate themselves in densely populated areas either.

Finally, the FARC put on the negotiating table a “road map” for addressing the still-unresolved complex aspects from here to the end of 2016, which the guerrillas hope will be approved in the next round of the talks that have been taking place in the Cuban capital over the last three years.

It is not only the FARC that is nervous about the transition to peace. The idea also worries sectors that make money, or otherwise benefit, from the war.

“Diverse local interests and groups opposed to change resulting from the peace process are already employing violence and intimidation to protect their interests, and the State has not had a sufficiently effective response,” the Office of the High Commissioner for Human Rights (OHCHR) said in its 2015 report on Colombia, released on Mar. 22.

The OHCHR also warned that “Based on international experiences, it is foreseeable that the cessation of hostilities and guerrilla demobilisation could lead to power vacuums and disputes over the control of illicit incomes generated by drug trafficking, extortion, human trafficking, prostitution, mining and co-optation of State resources.”

What was agreed on that day was an accord on “truth and justice” with regard to how members of the government forces and the FARC would face reduced criminal penalties for confessing and acknowledging their responsibility for human rights crimes.

But the international human rights watchdogs Amnesty International and Human Rights Watch warned that the 63-page agreement left the door open to impunity.

The OHCHR, for its part, stressed “the urgent need for an independent protection mechanism for military and police members wishing to contribute to truth and justice.”

Todd Howland, director of the OHCHR office in Colombia, said he found in his frequent field visits that “everyone is waiting for the new justice system to take up their case.”

The “Integrated Truth, Justice, Reparation and Non-recurrence System” designed in Havana requires funding, an enormous operational and administrative capacity, transparency in the selection of judges and prosecutors, and incentives and guarantees for agents of the state, members of the FARC and others involved in the conflict to participate to the largest extent possible.

As of 2015, 7,874,201 people were registered as victims of the armed conflict, in the unified registry of victims set up by the Colombian government. Most of them – 6,897,450 – are victims of forced displacement.

If and when an agreement is reached, the state will have to pay reparations to 6,084,064 people, equivalent to 12.4 percent of the population of Colombia.

The agreement on truth and justice was added to earlier accords on rural reform, political participation and illegal drugs.

The main hurdle, as Catatumbo said, is the paramilitaries: bands armed by powerful landowners, including some with ties to the drug trade, who have representation in Congress.

The political movement Marcha Patriótica emerged three years ago. Its social base includes rural families in war zones. Since then, 112 members of the movement have been killed, and another 320 have been framed and arbitrarily arrested. Of these, 130 are still in prison, according to the movement’s spokeswoman Luz Perly Córdoba, who was invited to speak at the launch of the OHCHR report.

Córdoba said the paramilitary bands are regrouping in the 29 departments where the Marcha Patriótica is present (of the 32 into which Colombia is divided).

Is history repeating itself? Perhaps, but the conditions today are different.

Not only has the OHCHR had an office here since 1997, with its members observing a large part of what is happening, on the ground.

There is also an International Criminal Court, which acts when a state cannot or will not prosecute in cases of war crimes, crimes against humanity, or genocide.

And the negotiations with the FARC have taken a historic step: the two sides asked the United Nations Security Council to help monitor and verify an eventual bilateral ceasefire and guerrilla demobilisation and disarmament.