UNITED NATIONS, Mar 14 2016 (IPS) - The Paris agreement means countries and corporations will be compelled to act much more quickly on making agricultural commodity production more sustainable. Companies must look beyond their supply chains. Farmers need support to overcome barriers such as: struggle with ineffective farming practices, lack of investment and fluctuating commodity prices. 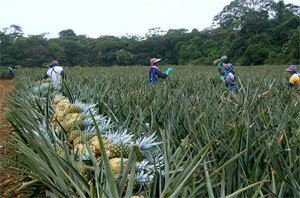 Our remaining forests – the lungs of our planet and so vital to stemming climate change –need to be protected. It’s time to work together to make agricultural commodity production sustainable. Last week Costa Rica made history by showing the world how this can be done.

In 2010, Costa Rica started responding to the environmental and social impact of the pineapple sector’s rapid expansion. The country set-up the National Platform for the Responsible Production and Trade of Pineapple in Costa Rica, designed to bring every group with a stake together. Supported by the UN Development Programme (UNDP) Green Commodities initiative, this government-led platform engaged 900 people representing big companies, such as TESCO and Walmart, small-scale farmers, traders, government and civil society.

The group came up with the Action Plan for Strengthening the Responsible Production and Trade of Pineapple in Costa Rica. This groundbreaking Plan has 12 sets of actions that represent a national response to the problems and now everyone owns that response.

This is reflected in the fact that a monitoring committee made up of government, civil society and business will oversee its implementation. It is also acknowledged at the highest levels, with the President of Costa Rica, Luis Guillermo Solis, signing a decree making the National Action Plan official last week.

Costa Rica is the first country to devise and adopt such a national response and is now leading the way for other countries that are working to create similar transformative plans.

These efforts are important because they offer concrete solutions to companies ready to move beyond simply addressing sustainability and environment issues through certifications and corporate social responsibility schemes, to devise ways to incorporate sustainable practices across their own supply chains together with government, farmers and civil society.

This is where the real and lasting differences will be made – when countries have national responses to overcome critical problems in commodity production. These efforts also empower small-scale farmers as they are able to bring their concerns and insights to the table and to get the support they need.

This is what is happening in Costa Rica, where the majority of pineapple producers are small-scale farmers who will soon be able to access training and other support to improve their practices and livelihoods.

If we are to achieve the Sustainable Development Goals and address climate change, national responses that are devised and owned by all stakeholders, which address environmental and social issues, then the Costa Rica’s example must become the new norm for agricultural commodity sectors around the world.