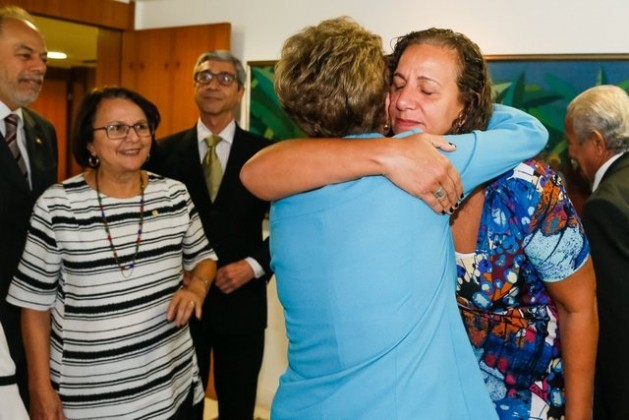 Brazilian President Dilma Rousseff, her back to the camera, receives a hug on Monday Apr. 18 by one of the minority of lower house legislators who voted against her impeachment the day before. Credit: Roberto Stuckert/PR

RIO DE JANEIRO, Apr 18 2016 (IPS) - Brazilian President Dilma Rousseff would appear to be, as she herself recently said, “a card out of the deck” of those in power, after the crushing defeat she suffered Sunday Apr. 17 in the lower house of Congress, which voted to impeach her. But Brazil’s political crisis is so complex that the final outcome is not a given.

A total of 367 legislators – 71.5 percent, or 25 more than the two-thirds majority needed – voted to impeach her and she now faces a vote in the Senate. Because the makeup of the Senate is similar to that of the Chamber of Deputies, the president’s fate is apparently sealed.

However, the climate of tension in Brazil has brought new surprises almost every week since last year. And the impeachment trial could drag on for over six months, passing through different stages and procedures, under the shadow of storms like the corruption scandal that threatens more than 300 politicians.

The Senate will have about three weeks to decide whether to go ahead with putting the left-wing president on trial for alleged irregularities in last year’s federal budget.

Since the decision only requires a simple majority of 41 out of 81 senators, the assumption is that the impeachment will move forward. The vote will be based on an assessment of the case by a special 21-senator commission that will have 10 working days to turn in its report.

In the next few weeks, Rousseff – whose first term started on Jan. 1, 2011 – will remain in the presidency. But she will have to step aside for 180 days if the Senate votes in favour of a formal impeachment trial. After that, another special commission will investigate, listen to the defence, and draw up a proposal to find her guilty or absolve her.

The trial by the 81 senators would be presided over by the president of the Supreme Court.

Rousseff would be banned from public office for eight years if two-thirds of the senators – 54 – found her guilty. She would be acquitted if she managed to obtain 28 votes in favour, including abstentions and absences.

There are multiple factors that could modify the script as well as the final outcome. 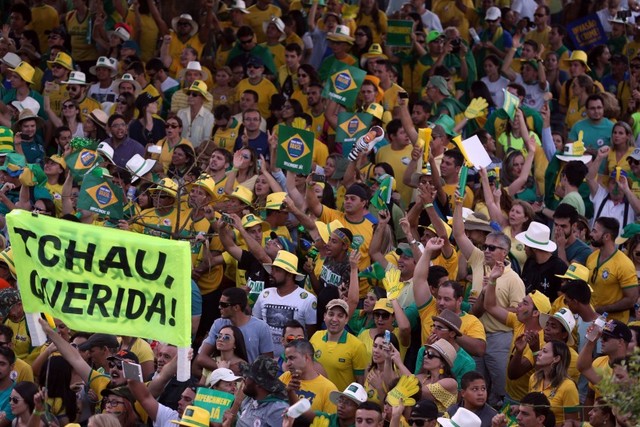 Demonstrators supporting the removal of Brazilian President Dilma Rousseff celebrate Sunday Apr. 17 outside the lower house of Congress in Brasilia after it voted to impeach her. “Tchau, querida” (Bye-bye dear) reads one of the signs. Credit: Fábio Rodrigues Pozzebom/ Agência Brasil

The lawmakers pushing for impeachment, who will take power if Rousseff is removed, have all been implicated by the Operação Lava Jato or Operation Car Wash investigation into corruption and could lose their seats as a result of a trial in the Supreme Court, where sitting politicians are tried.

Facing the greatest threat is the speaker of the lower house, Eduardo Cunha, who played a decisive role by speeding things up in the initial phase of the proceedings against Rousseff.

But that role has generated resistance against the impeachment. Cunha, accused of taking millions of dollars in bribes to secure contracts with state oil giant Petrobras, and reported to have illegal bank accounts in Switzerland, is seen as the biggest symbol of corruption, even by some of those who back the president’s removal.

Many members of the Chamber of Deputies took advantage of the moment to accuse Cunha of being a thief or corrupt, when they announced their vote on Sunday. Even some of those who voted in favour of impeachment made an attempt to mark their distance from the speaker of the house.

Deputy Jarbas Vasconcelos, for example, accused Cunha of “casting a stain over” the proceedings and the lower house.

Both of them belong to the Brazilian Democratic Movement Party (PMDB), an ally of the government until last month. If Rousseff is suspended, the party will lead the government and both houses of Congress.

Vice-president Michel Temer, who will become president if Rousseff – reelected to her second term in October 2014 – is impeached, and the president of the Senate, Renán Calheiros, have been signaled as benefiting from the corruption orchestrated by Petrobras, as they both agreed to cooperate with the justice system in exchange for a reduction in any eventual sentence.

The charges and the information provided in the investigation will tend to focus on these three politicians – the vice president and the heads of the Chamber of Deputies and the Senate – as they are in line to replace the president.

Rousseff’s supporters stress that she is an exception among the leading protagonists in this battle for power, as the only one who is not facing corruption charges. 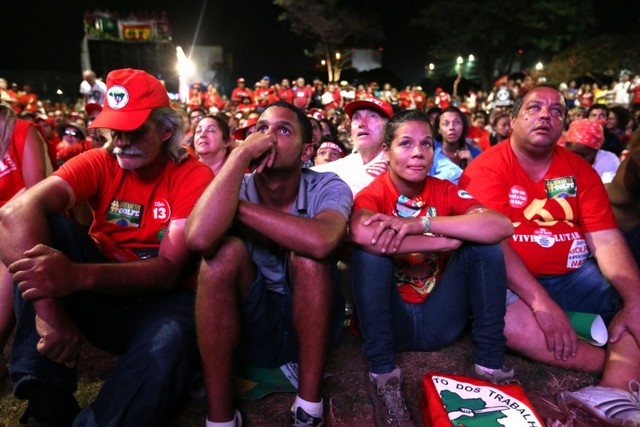 However, she is isolated now because the left-wing ruling Workers Party’s (PT) image has been battered by accusations that it has diverted public funds since it first came to power in 2003 under former president Luiz Inácio Lula da Silva.

New charges and lines of investigation by Operation Car Wash, led by the public prosecutor’s office and the federal police, could modify the political landscape, as has happened in the last few months when it investigated favours allegedly received by Lula from leading construction companies that have carried out large-scale oil industry and hydropower projects.

Another source of uncertainty is the current Superior Electoral Court investigation into the 2014 campaign funds that could invalidate the victory by Rousseff and Temer due to the alleged use of illegal donations coming from bribes from Petrobras contractor companies.

If the 2014 elections outcome is challenged, new elections will be held. But experts believe that this ruling will not come until 2017, and in that case it would be Congress that would elect the new president and vice president who would complete the current term until 2018.

The economic crisis, meanwhile, is only expected to get worse, because an interim government would find it hard to adopt the unpopular measures that economists, and Temer himself, see as indispensable for fighting the recession, such as a fiscal adjustment plan.

A truce is also possible, but it would be hard to accommodate the interests of the nearly two dozen parties in the lower house that helped approve the move to impeach Rousseff. The broad majority that was achieved was due to small and medium-sized parties that joined together with the large opposition parties when the president’s defeat began to look likely.

The big fuel for political decisions lately in Brazil has been the prospect of gaining a share of the power.

The corrosion of the new coalition that would take power will be inevitable, due to internal divisions, the recession and subsequent rise in unemployment, new findings by the corruption investigation and demonstrations by Rousseff’s supporters, which will clearly rise in intensity.

The media, which the left accuses of being biased against Rousseff, Lula and the PT, will likely focus their negative news stories on the new holders of power, accentuating the erosion.

The defence of the president, led by Attorney General José Eduardo Cardozo, disparaged the lower house decision on the impeachment, calling it “purely political” and noting that Rousseff is not facing serious accusations but minor charges which, he said, have “absolutely no background or basis.”

Cardozo argued that this is possible in a parliamentary system, but not in Brazil’s presidentialist system. The proceedings have been criticised as unconstitutional, since Rousseff is not accused of any concrete crime, and a president can’t be impeached only for political reasons, he argued.

These arguments are not likely to modify the Senate’s eventual decision, given the president’s isolation, but they could strengthen the movement against her removal.