Charo Mina Rojas is an activist with the Black Communities’ Process in Colombia. 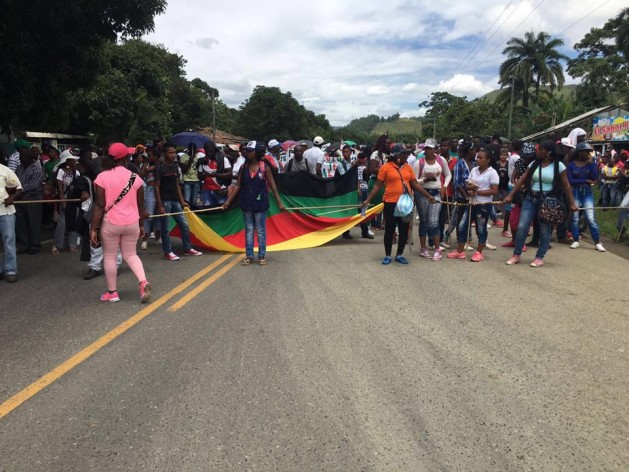 Cauca, COLOMBIA, May 1 2016 (IPS) - While Colombia’s peace talks continue in Havana, Cuba, back home in the region of North Cauca, Black Colombians have found their cries for access to their ancestral lands met with tear-gas and rubber bullets.

We saw them approach, the ESMAD, the dreaded special police unit called out to squelch popular mobilizations against the government. We pressed even closer together to maintain our lines on one of the main highways that connects Colombia’s north and south. Over a thousand of us, black Colombians from one of the poorest regions of the country, gathered to demonstrate to the government that we would not be silenced while our territories are taken away. Suddenly, without warning, the ESMAD began their assault and soon elders, children, women and our young people were choking from the tear-gas and holding parts of their bodies stinging from rubber bullets indiscriminately fired at us.

The ESMAD’s assault took place on April 25 in the region of North Cauca, Colombia. The next day, the ESMAD sabotaged conversations between the community councils and the authorities, their renewed attacks this time also effecting some of the government officials. A three month-old baby and several children were hurt by a tear-gas grenade that exploded inside their house. We black Colombians are more or less held hostage by the ESMAD, while the national government had promised a meeting at the Mayor’s office in the nearest town.

The Afrodescendant Women’s Mobilization has received numerous death threats due to our actions to protect our community’s rights and territories. However, the government fails to find the responsible persons for the illegal mining or the death threats.

The Northern Cauca region, located in the department of Cauca, is a critical area in the negotiations between the Colombian government and FARC that are currently taking place in Havana, Cuba. Yet Black communities and our interests have not been considered during these discussions, even though our ancestral territories will be compromised by at least one of the agreements: the 63 so-called campesino reserves. Most of the areas the FARC wants to settle or continue to control are in the middle of or close to black and Indigenous lands.

The main national Black organizations have been concentrated in the National Afro-Colombian Peace Council (CONPA by its acronym in Spanish), which with the Interethnic Commission of Peace, has demanded and lobbied the Colombian government to bring our voice and interests to the table in Havana. But since our demands have been ignored we have had to find new ways to make our voices heard.

As has often been the case in our long history of struggle and resistance in Colombia we have again had to turn to protest. In November 2014, eighty Afro-descendant women mobilized and walked across the country to Bogotá, the capital of Colombia, where we seized the building of the Ministry of Interior to demand a stop to the increase in illegal mining in our territories. These mining activities have brought death, violence and tragedy. In one mine collapse alone, over 40 of our people were killed.

These mobilizations have often been led by Black women, increasingly so in recent years. We have made the government sign agreements to remove illegal mining and admit that granting mining rights to multinationals violates its own laws. We have also made the government acknowledge that these agreement violate the right to prior and informed consultation and consent, as recognized by the International Labour Organization’s Indigenous and Tribal Peoples Convention. Yet those admissions and agreements have not translated into respect for our rights or any change in government’s actions or approach. In fact, despite the agreements, and the laws and the constitutional mandate to consult, to respect, promote and protect the rights of Black people, the Colombian government has granted mining concessions that cover seventy percent of the Cauca lands to multinationals such as Anglo Gold Ashanti.

The Afrodescendant Women’s Mobilization has received numerous death threats due to our actions to protect our community’s rights and territories. However, the government seems incapable of finding those responsible for the illegal mining or the death threats.

That is why we must continue to resist. The Community Councils will continue blocking the road until the national authorities commit to a renewed dialogue that will lead to substantive changes in how the interests of our communities are protected. It is clear for us that our Black lives matter only through our own efforts.

Charo Mina Rojas is an activist with the Black Communities’ Process in Colombia.