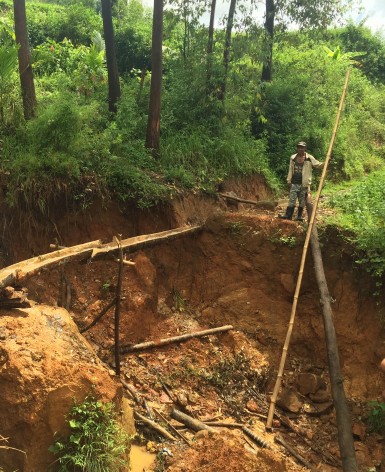 A collapsed irrigation system has led the local community to try and improvise a solution—with unfortunate timing as the rice fields need the water now for spring yields. Credit: UNDP in Indonesia

UNITED NATIONS, May 9 2016 (IPS) - Helping at-risk communities adapt to climate change impacts is an important part of the Paris Climate Change agreement, but adaptation will not be complete without considering disaster risk.

Disasters and climate change pose major challenges to sustainable development. They undermine livelihoods, access to natural resources, and food security for billions of people. From 1980 to 2012, disasters caused nearly $3.8 billion in economic loss and claimed a total of 1.4 million lives.

In developing countries, vulnerable population’s ability to recover from the impact of these events can be weakened by poverty, inadequate or unsustainable development practices, environmental degradation, and population growth.

When it comes to climate change, there is no shortage of urgency. We are no longer placing our worry for the future in our grandchildren’s era. Our immediate global condition is at stake.

If you ask the pastoralists in the Turkana region of Kenya – a place already facing drought every two to three years – they will tell you first hand that the rain they depend on has become completely unreliable. For them, as for millions more, risk management now has to be calibrated to an ever-changing climate in order to be effective.

At the same time, as we rush to adapt to climate change, we must not forget the resources and lessons offered from decades of risk management to address landslides, earthquakes, floods, droughts, and storms—encompassing both climate risk and non-climate risk.

During a recent visit to a village in rural Indonesia in March I saw firsthand the impact of disaster on climate adaptation initiatives. Just the year before, an adaptation project had been implemented—benefiting the local women in particular with alternative livelihoods – introducing an irrigation system for traditional and new crops.

On paper this sounds wonderful, and in many respects it is, however, in person you would see that the location of this village is on a very steep mountainside extremely prone to landslides. No risk assessment (nor risk-mitigating measures) had been completed, and a recent landslide had completely destroyed the irrigation channel.

Despite the ingenuity of the community to devise a makeshift replacement channel, the village now faces severe losses in their crop yield this year.

Had a risk assessment been done to catalogue the likelihood of a landslide, risk mitigation and management measures could have been added on to the project, preventing losses.

2016 represents an opportunity for disaster risk management because of three important global policy agendas. Never before has the world been so committed—and in favor of working in tandem—to achieving sustainable development, reducing disaster risks, and adapting to and combatting climate change.

The Sendai Framework for Disaster Risk Reduction was adopted in 2015 and promotes actions that go beyond reactionary disaster management to addressing the complex nature of risk, including from climate change.

The Paris Climate Agreement marks a critical opportunity to launch an era of innovation, emphasizing adaptation, mitigation and national targets that can accelerate low-emission and climate-resilient development. And uniting them all are the Sustainable Development Goals, the ambitious agenda that plots progress on everything from food security to education to resilient infrastructure.

Having these agendas in place at the global level is highly motivating, but what we need now is effective action on the ground that will not fail the ‘last-mile’ communities we support. This very simply means working together.

A longstanding perception is finally changing—that limited resources means investment in one area takes away from another. The reality on the ground is proving time and again that strategic investment in combined approaches not only maximizes co-benefits but also protects and makes investments sustainable.

Disaster risk reduction and climate change adaptation both share an overarching aim to reduce vulnerability and build resilience as a means to achieve sustainable human development. Nevertheless, these two practices have often been implemented separately, thus creating duplications and in some cases competition reducing progress towards the shared objective.

This has to change. The Integrated Climate Risk Management Programme, funded by the Government of Sweden, is an example where participating countries have been using integration to make headway for sustainable development at national and local levels, while being connected to a global South-South network to exchange tools and good practices.

The support has enabled early warning systems, and riverbed and slope stabilization in Nepal; risk-informed livelihood diversification in Kenya where pastoralists are taking up bee-keeping; and climate-smart agriculture and agroforestry in Uganda. These interventions were built on and informed by an integrated and evidence-based review of local contexts, including risk-profiles.

Lessons need to be shared and good practices like this need to be expanded. Development, if it is going to be sustainable must be resilient. We will fall short of true resilience if disaster risk is not recalibrated to climate change and equally if adaptation is not risk-informed.