Josette Sheeran is the President and CEO of Asia Society since 2013. She leads the organization’s work throughout the U.S. and Asia, and across its disciplines of arts and culture, policy and business, and education. Sheeran is a former Vice Chair of the World Economic Forum and a former Executive Director of the United Nations World Food Programme. She is a member of the US Council on Foreign Relations and has received several honors and awards. 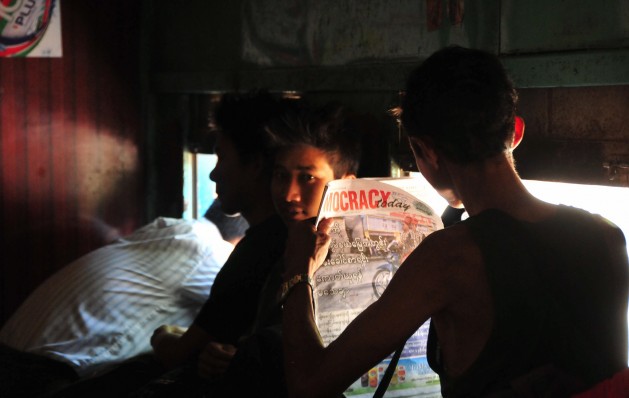 A commuter on the Circular Train in Yangon, Myanmar, reads a copy of the newspaper Democracy Today. Credit: Amantha Perera/IPS.

NEW YORK, May 3 2016 (IPS) - Travel in many parts of Asia, as I do, and you are likely to find everyone looking at their smartphones – even in remote areas – hungry for information wherever they can find it.

Certainly it is true that access to information has increased dramatically in the last few decades across Asia, as many nations have risen out of abject poverty and a greater openness has taken a foothold in previously isolated and controlled areas. Social media, in places as disparate and different as China, Iraq and Indonesia, Afghanistan and Myanmar, to name but a few has revolutionized access to information.

Yet the latest press freedom report from Reporters Without Borders is a sobering read, and a reminder of the long way many countries, including those in Asia, still have to go regarding fundamental press protections and freedoms.

Crackdowns notwithstanding, the explosion of social media in China has meant that access to information in China has grown dramatically, with literally billions of exchanges daily over ubiquitous smartphones.

Information is only as good as our access to real underlying facts, and at the root of vital information is still, often, a courageous and lone reporter trying to get to the bottom of corruption or wrong-doing.

The 2016 World Press Freedom Index ranks 180 countries according to metrics involving pluralism, media independence, the quality of legal frameworks for journalists, and the dangers faced by reporters. It’s a “snapshot of media freedom,” as its authors put it, and according to the survey, the pace-setters in Asia are New Zealand (#5) and then the tiny Pacific Island nations Samoa and Tonga (#29 and #37).

To some degree, the overall low ratings for Asian nations are unsurprising. Europe has dominated the list since it was first published in 2002; this year Finland, the Netherlands and Norway are 1, 2 and 3, and 14 of the top 20 countries are European. What Reporters Without Borders terms the “infernal trio” at the very bottom includes two Asian nations – Turkmenistan (#178) and North Korea (#179) – that have long been enforcers of a blanket censorship. (Eritrea in East Africa rounds out this infamous “trio”).

More surprising is a documented backsliding in countries where economic growth and broader freedoms have been the norm for decades. Japan fell eleven notches in the survey, to #72. “In the year since the law on the protection of specially designated secrets took effect in Japan,” said the report, “many media outlets, including state-owned ones, succumbed to self-censorship…and surrendered their independence.” South Korea dropped ten places, to #70, as “relations between the media and government became much more frayed”. Many survey responders worried about a “cloud over Hong Kong”, and China overall again came in near the bottom at #176, a notch below Vietnam.

The Asian nation that saw greatest improvement? That was Sri Lanka – jumping 24 places, to #141, thanks to a lessening climate of fear that had gripped many journalists covering the government.

Perhaps the most interesting case study in Asia is Afghanistan, which has seen both a positive sea change in press freedom, and a cautionary tale about how such change can be dangerous for reporters and editors.

No doubt the change in Afghanistan has been remarkable. In 2001, the last throes of Taliban rule, Afghans had access to fewer than 30,000 fixed telephone lines, and only one radio station; today they are served by six telecom companies, and more than 70 TV stations and 175 radio stations. Saad Mohseni, CEO of Moby Group, which runs several media properties in the country, notes that when it came time for the people of Afghanistan to vote in their third national democratic elections, in 2014, these new media platforms offered citizens the chance to engage directly with candidates in town hall-style meetings.

“Little did we anticipate the profound impact the media would have in re-shaping Afghan society,” says Mohseni, who founded the country’s first post-Taliban independent radio station – Arman FM – in Kabul in 2003. “Beyond enhancing access to information, the media has contributed significantly to making Afghan society more tolerant, open and united.” The new freedoms have helped relax social attitudes, by showcasing female presenters on television and radio. Today Afghans also frequently turn to TV or radio journalists to voice complaints about government services, and the media regularly investigates cases of corruption, holding officials accountable for their actions.

But opposition to these freedoms is a constant, and recently it has proved dangerous. On January 20th, a Taliban suicide bomber struck a bus carrying employees from the television station TOLO in Kabul, killing seven and injuring another 15. Says Mohseni: “With this attack, we were reminded of the risks of running a private media group in a country with ongoing conflict, where journalists are frequently targeted. I am not surprised when people ask me whether these risks – and the sacrifices – are worth it.”

These dangers explain why Afghanistan still sits at #120 on the Reporters Without Borders list – up only two notches (though well ahead of where it stood in 2009, second from the bottom, at #179). Even with an effort at the best surveys and metrics, such rankings can prove complicated. For an Afghan journalist, the climate is surely tough; for an Afghan consumer of information, things have markedly improved. Something similar may be said about China – which languishes near the bottom of the 2016 list. Crackdowns notwithstanding, the explosion of social media in China has meant that access to information in China has grown dramatically, with literally billions of exchanges daily over ubiquitous smartphones.

What is needed to improve Asia’s rankings, in the years to come? Obviously greater security, in Iraq and Afghanistan and other conflict zones. In other parts of the continent, political leadership will make the difference. A real analysis of the documented connection between the free flow of information and prosperity may help underscore the case. And ultimately there is the question of where valuable government resources are spent: improving the lives of citizens or expending so much energy monitoring comments on WeChat, or Facebook, or Twitter?

Afghanistan’s Saad Mohseni likes to take the long view when it comes to press freedom in his country: Look at where Afghanistan was a decade ago, Mohseni would say. In a similar vein, look at Myanmar; look at Iraq. In these countries, ordinary citizens may be furious about their daily lives (witness this weekend’s storming of the Iraqi parliament), about the slow pace of change, about any number of issues that their parents and grandparents may have been angry about as well. The difference today – and it is a profound one – is that citizens in these nations can read about these issues, watch televised news about them, or debate one another on social media. Some may write a letter to the editor, or call in to a radio or television show, or share their views via WhatsApp,  Facebook and Twitter. In so many of these places, their forebears never had that opportunity.

Josette Sheeran is the President and CEO of Asia Society since 2013. She leads the organization’s work throughout the U.S. and Asia, and across its disciplines of arts and culture, policy and business, and education. Sheeran is a former Vice Chair of the World Economic Forum and a former Executive Director of the United Nations World Food Programme. She is a member of the US Council on Foreign Relations and has received several honors and awards.