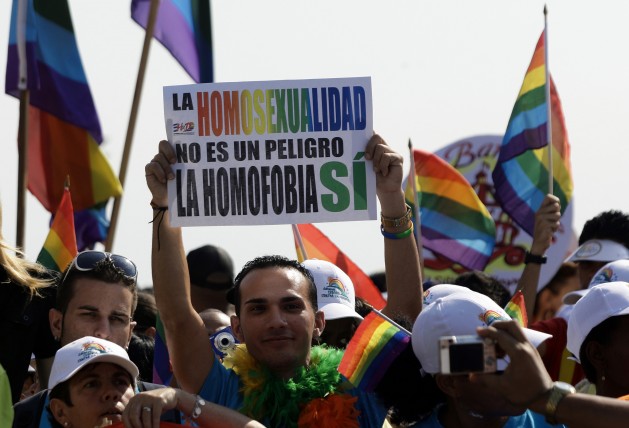 UNITED NATIONS, Jun 2 2016 (IPS) - Treatment for HIV and AIDS has increased, but key populations including lesbian, gay, bisexual and transgender (LGBT) communities continue to be left behind and even excluded altogether.

In a new report, published ahead of the upcoming High-Level Meeting on Ending AIDS, the Joint UN Programme on HIV/AIDS (UNAIDS) found immense gains in access to antiretroviral therapy (ART) across 160 countries.

However, UNAIDS noted that HIV reduction and prevention efforts must be scaled up since many so-called key groups such as LGBT communities are still not being reached.

In North America and central and western Europe, gay men and other men who have sex with men account for almost 50 percent of all new HIV infections. In Latin America and the Caribbean, the rate is approximately 30 percent.

The persistent exclusion of LGBT communities in HIV responses globally has recently resurfaced at the United Nations.

Russia along with the Organisation of Islamic Cooperation (OIC), a bloc of 57 states including Saudi Arabia and Egypt, banned 11 LGBT organisations from attending the High-Level Meeting on Ending AIDS which is set to take place in New York on 8-10 June.

He added that the exclusion of transgender participants is to “condemn us, to leave us in silence.”

GATE is among the organisations that were blocked from attending the meeting.

“It really seems like a brazen attempt to deny reality,” she continued.

Chief Executive Officer (CEO) of Pangaea, a non-profit HIV agency, Ben Plumley noted that their particular concern is with the General Assembly (GA) allowing themselves the right to exclude any civil society group from any country, anonymously and without giving reason.

“This was a tragic, retrograde step. And sets a disturbing precedent,” he told IPS.

IWHC and Pangaea is among a group of civil society organisations that sent a joint letter to the UN GA President Mogens Lykketoft which expressed their “profound outrage” at the move.

“By excluding organisations…the General Assembly is sending a terrible message to the world that it is prepared to let discrimination and prejudice yet again hamper our collective efforts to end AIDS,” the letter stated.

“It also signals a disregard for communities most affected by HIV worldwide and Member State intentions to weaken the outcome of the High-Level Meeting through exclusion and subsequent omission,” it continued.

When asked whether the 90-90-90 treatment target can be reached, Plumley told IPS that the exclusion of LGBT and other key populations “guarantees” that the targets and goal will not be met.

“Instead of focusing on the resources needed over coming decades to get this epidemic under control, we are having to go back and fight basic issues of human rights,” he stated.

“Now is the time for leadership, not fear,” Plumley continued.

Cabral urged for the UN must include the voices of affected communities to “speak for themselves” and to engage in “meaningful participation” and decision-making.

Though Lykketoft has said that the decision is out of his hands, Kowalski told IPS that there are many things he could do including the inclusion of LGBT representatives as panelists for the high-level meeting and the creation of specific spaces to discuss LGBT rights. Though some of this has been done, she stated that inclusive conversations must increase, continue and expand.

Cabral highlighted the need for the UN can take a role in collecting specific data on LGBT populations affected by HIV and AIDS to better allocate resources and reach populations on the ground.

“If we live in a world that is persecuting us and beating us up and killing us, it is very difficult to think that international organisations are going to have a revolutionary politics,” Cabral told IPS.

“Governments really need to face the facts, they need to take action and response to the realities of people’s lives,” Kowalski told IPS.

“At the end of the day, they really need to put human rights front and center,” she concluded.

In just the last two years, the number of people living with HIV on ART has increased to 17 million people—2 million more than the UN General Assembly’s Political Declaration on HIV and AIDS target of 15 million by 2015. In the world’s most affected region, eastern and southern Africa, the number of people on treatment more than doubled from 24 percent in 2010 to 54 percent in 2015.

The rise in access has reduced HIV/AIDS-related deaths by 43 percent around the world.

“The full potential of antiretroviral therapy is being realised,” said Executive Director of UNAIDS Michel Sidibé during the launch of the agency’s report.

“I urge all countries to seize this unprecedented opportunity to put HIV prevention and treatment programmes on the Fast-Track and end the AIDS epidemic by 2030,” he continued.

However, Sidibé acknowledged the barriers that populations face including LGBT communities, stating:  “We need a people-centred response to the AIDS epidemic that removes all obstacles in the path of people’s access to HIV prevention and treatment services…so that we can end the AIDS epidemic for everybody.”