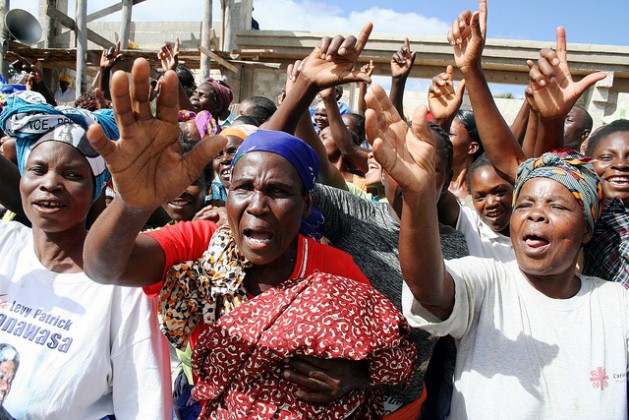 UNITED NATIONS, Jul 14 2016 (IPS) - Less than a year after the adoption of the global Sustainable Development Goals (SDGs), non-government organizations (NGOs) are concerned about declining possibilities for participation, both at the UN and in national politics.

Worldwide, there are estimated to be more than 10 million NGOs, of which some 4500 organizations have a consultative status at the UN’s Economic and Social Council (ECOSOC). This institutionalized way of guaranteeing civil society participation is acknowledged as an important tool by many. However, many civil society actors feel their influence is shrinking. For them, it is poor timing as they are eager to help with implementing the SDGs.

Stavros Lambrinidis, EU Special Representative for Human Rights, said implementing the ambitious global agenda would be “impossible without civil society” during a panel discussion here Tuesday. Governments do not need to agree to everything civil society said, but they are obliged to at least guarantee their freedom and listen, Lambrinidis said.

Other national representatives supported that point of view. Bulgaria’s permanent representative to the UN, Stefan Tafrov, also sees a decline in participation since last year and said “there is a real danger that this trend continues.”

“Not many people come to international meetings after all… the majority of the people are out there and you would have thought that that’s the place where the UN would stand up and speak up for the people. Unfortunately, that is very rarely the case.” -- Salil Shetty.

The widely praised 2030 Agenda to achieve the 17 SDGs was supposed to include civil society actors to a special degree. The State of Civil Society Report 2016, published by Civicus this June, stated that civil society organizations (CSOs) – another way of referring to NGOs – need to be more than a watchdog on the way to reaching the SDGs.

But apparently, communication is not functioning well at the moment – particularly in two areas: consultation in formerly model states and neglecting of marginalized groups, such as disabled people.

Amnesty International’s Secretary General, Salil Shetty directly addressed a few examples on the first matter: “The way in which refugees or the Roma are treated in Europe … and the abuse of anti-terror legislation in Europe are very, very serious.” Backward steps like these should be tackled by states and non-state actors together, the panelists agreed.

Why is that not working? One answer lies in the mediating and exemplary function of the United Nations. The UN and its human rights agencies have a responsibility to deal with these developments and they do.

In addition, the organizations with a consultative status at ECOSOC are thought of as a force at the United Nations, yet respect for the decisive body, the NGO committee, is shrinking: “The ECOSOC accreditation process is simply shameful”, said Shetty.

He referred to the denial of consultative status to the Committee to Protect Journalists last month. The decision was widely criticized and even Ban Ki-Moon said that “freedom is under threat, including at the last place this should happen: at the United Nations.”

The Committee to Protect Journalists is not the only organization publically reacting against the United Nations cooperation with civil society: The International Disability Alliance (IDA) expressed its discontent this week. For example, only recently a round-table on rights of persons with disabilities was held without including a relevant advocacy group of disabled people, IDA’s new Chair Colin Allen recounted.

The room for improvement is limited. Restricted influence on the political level has always been one major problem of NGOs. Adding to the criticism towards the UN, Amnesty’s Salil Shetty also emphasized the necessity for the international organization to focus on the grassroots level together with the civil society:

“Not many people come to international meetings after all… the majority of the people are out there and you would have thought that that’s the place where the UN would stand up and speak up for the people. Unfortunately, that is very rarely the case.”

A common view in the CSOs is that politics prevent a universal approach to human rights question. Colin Allen showed a more optimistic approach: “Political uncertainty is common around the world but I think that the civil society movement will remain stable and that’s because we are working with a variety of changed political directions but we have one common goal”, he told IPS.

Editor’s note: IPS is an NGO with ECOSOC Consultative Status.