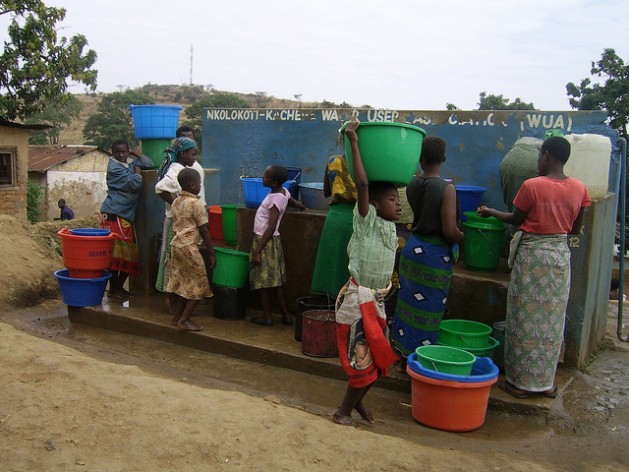 UNITED NATIONS, Jul 21 2016 (IPS) - Although the devastating El Niño of 2015 to 2016 has now subsided, in many parts of Africa, Central America and Southeast Asia rains and harvests are not expected to recover until 2017.

“We should expect future events to be less predictable, more frequent and more severe, starting with La Niña… The challenges to our response go far beyond humanitarian action,” said Secretary General Ban Ki-Moon.

The UN is calling for donors to provide funds to help address the current and deepening humanitarian crisis resulting from El Niño.

However at a high level meeting about El Niño this week UN and NGO representatives also called for UN member states to take action on climate change.

“This is a human-induced aggravation of a traditional weather pattern. We’re into a new normal where it is no longer El Niño – it is El Niño affected by climate change”, said Mary Robinson, UN Special Envoy on El Niño and Climate at a press briefing here on 18 July.

“The international community has to take responsibility, particularly the countries that are more responsible for (carbon) emissions.”

In Southern Africa El Niño has caused the worst drought in 35 years. Ertharin Cousin, Director of the World Food Program (WFP) shared her insights from Malawi on Tuesday:

“I heard and saw firsthand the hardships and worries… El Niño’s impact in Malawi alone has been severe: 6.5 million people will endure food insecurity, almost 40 percent of the population.”

The crisis does not only cause hunger. “Young girls and women need to queue through the night for maize, to get maize in the morning – which is a problem in Southern Africa because the prices for maize have just gone through the roof, and in doing so they are at risk of sexual exploitation” Rebecca Sutton, the El Niño Campaign Manager of Oxfam International, told IPS.

The landlocked country of Malawi is one of several countries in desperate need of immediate support.

“The lean period in Southern Africa is always between January and March. Because we had a drought last year and now we had El Niño this year, the lean period is coming forward to September,” Sutton explained to IPS.

“There is a small harvest due in September/October, but it’s not the big harvest: the big harvest is next March/April. So people somehow have to get through this enormously intense time and then, on top of that, we’ve got La Niña.”

Although La Niña is considered the opposite event to El Niño historically the two were separated by years of normal weather patterns, however this is beginning to change with los Niños increasingly occurring back to back.

In Southeast Asia, droughts caused by El Niño have similarly destroyed most of the crops. Macharia Kamau, who is UN Special Envoys on El Niño & Climate alongside Robinson, described what he saw in Timor-Leste:

“In case of one community in Timor-Leste, they hadn’t seen proper rain for over 24 months. So they had lost basically 4 planting seasons… And were left for two years to the point where they had lost all their assets.”

“A significant number of affected communities are resorting to negative coping strategies such as selling assets for cash and to meet food needs,” said Sutton.

We’re into a new normal where it is no longer El Niño – it is El Niño affected by climate change”, -- Mary Robinson, the UN Special Envoy on El Niño.

The government of Timor-Leste is coordinating its response with NGOs, including Oxfam, and UN agencies, said Sutton.

But apart from giving first aid, what plans does the international community have against los Niños? National as well as UN representatives agree that a more long-term strategy is needed.

“The main thing that we have to do is help them finding a type of agriculture that is more resilient to this kind of climate shock – which might involve having different seeds, dry resistant seeds for example, or it might involve different irrigation systems to help people work through times of droughts, it might involve insurance schemes as long as they are targeted at the very poorest people,” Sutton from Oxfam presented some approaches.

It is essential that words are turned into operations: In 2017, the farmlands might recover, but the next El Niño could start three years from now.