Inés M. Pousadela is a Policy and Research Officer at CIVICUS. 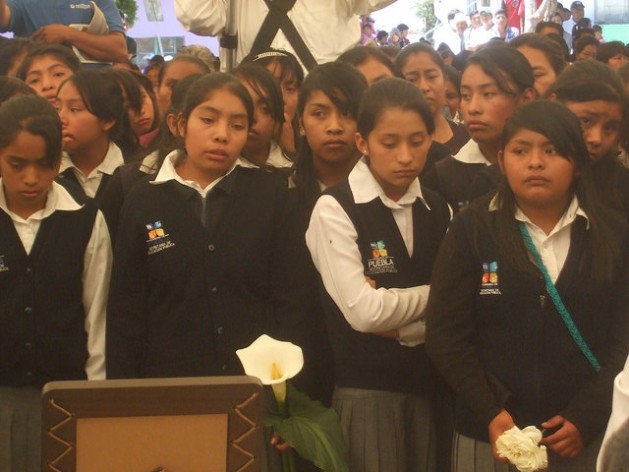 Students attend a funeral in 2014 after their classmate was killed during a police crackdown on protests. Credit: Daniela Pastrana /IPS

As worrying as the hard data is, what’s even more worrying is the Mexican government’s continued refusal to acknowledge the situation. In the words of Yésica Sánchez Maya of Consorcio Oaxaca, a local civil society organisation, the State “is investing more efforts and resources in denying the existence of a problem that is apparent [to the whole world] than in actually solving it.”

Despite constitutional guarantees, the rule of law is incomplete and highly uneven in Mexico. In states such as Oaxaca, where protesting teachers recently met with violent repression, or Guerrero, where 43 students from a teachers’ college were disappeared and are presumed dead since 2014, civil society organisations and activists face powerful restrictions. These include violence linked to drug trafficking, the infiltration of local governments by increasingly diversified organised crime operations, pervasive corruption, police repression, and severe human rights violations by the security forces.

In June, Oaxacan teachers took to the streets to protest what they see as questionable government “education reform”. Over the weekend of 19 to 20 June, security forces killed at least nine and wounded dozens in attacks on the teachers and local residents. A statement cosigned by several Mexican civil society groups highlighted that Oaxacans live in a context of “generalised” violence in which social movements – especially those involving teachers – have been long criminalised by the courts, the security forces and the media.

Contrary to current best practices regarding the management of public assemblies, Mexico’s federal government and the state government of Oaxaca have once again resorted to punitive measures to maintain public order.

Teachers’ union leaders often face judicial harassment, including arrest and detention. One such arrest took place on June 11, just as the protests were heating up. The teachers denounced the arrest as a politically motivated act of judicial harassment, dismissing the alleged embezzlement and money laundering charges as mere excuses meant to deactivate the protest, therefore redoubling their ongoing road blocking strategies. In the days and hours before violence was unleashed, the authorities turned the area into a war zone: as tension increased, an air fleet overflew the area and large numbers of militarised police forces were deployed. Nothing but tragedy could result from the heavily armed security units facing the crowds.

The same old discussion ensued regarding the mobilised teachers’ moral virtues (were they peaceful enough?), their tactical choices (how legitimate is road-blocking, one of their preferred methods of disruption?), their policy preferences (were they right in opposing education reform?), and even their subjective reasons for rejecting the government’s proposed changes (were they afraid of losing their jobs if their performance was evaluated?). While policy choices are for Mexicans to discuss – and one of the main grievances expressed in the streets is that the government is trying to impose a reform rather than submit it to public discussion – there is no justification of the use of deadly force by state authorities.

Contrary to current best practices regarding the management of public assemblies, Mexico’s federal government and the state government of Oaxaca have once again resorted to punitive measures to maintain public order. They treated roadblocks, historically a part of social movements’ tactics of resistance, as serious crimes. They used the criminal justice system as a tool to both inhibit protests and punish protestors for engaging in them. The violent government reaction against social protest on June 19 to 20 therefore came as no surprise. According to the authorities, it was when the police tried to evict the protestors that unidentified gunmen, apparently not linked to the protest organisers, opened fire, and chaos followed. Following the incidents, eyewitnesses agreed that the protestors themselves had been unarmed.

Far from an unprecedented tragedy, this echoed a similar massacre a decade earlier. Impunity allowed for repetition: as emphasised by Sánchez Maya, “Nobody has yet been arrested and convicted for the terrible repression that occurred in Oaxaca in 2006. […] The state has so far been unable or unwilling to guarantee access to justice, even in cases where responsibilities were clear as a result of victims’ testimonies. This has generated impunity, and therefore permissibility for human rights violations.”

In Mexico, the core freedoms that make up civic space, namely those of association, peaceful assembly, and expression, are not fully respected in practice, thus this impunity for violations prevails. According to data released by the Mexican government, more than 22 000 people have disappeared in the country since 2007. A 2016 Front Line Defenders report, documented at least 8 human rights defenders murdered in Mexico in 2015, while the Mexican chapter of Article 19 documented 23 disappearances of journalists between 2003 and 2015 – an average of two per year. The latest annual report by the same organisation describes a situation of widespread fear among media workers, with 397 aggressions against the press documented in 2015 (one every 22 hours, a 22 percent increase since 2014), including 7 murders.

Not surprisingly, the space for free expression, both in the mainstream media and online, is limited by self-censorship. Participation in street protest also entails risks, as the smallest spark of violence by protestors is usually a welcome excuse for the excessive use of force by the security forces, oftentimes followed by arbitrary detention and even torture under custody. Several states have legislation allowing police to use firearms or deadly force to break up protests.

Violence and repression are part of everyday life in several states and localities across Mexico even though only a selected few cases eventually come under the international spotlight. The case of the 43 Ayotzinapa students who were disappeared on their way to a protest in Iguala, Guerrero state in 2014 was a turning point in this respect. When Mexican activists are killed for speaking truth to or demanding explanations from the powerful, their fellow citizens are not looking away anymore.

Since the disappearance of the Ayotzinapa 43, there has been sustained demands for an investigation, which have been vigorously renewed in the last few weeks. Likewise, the teachers’ repression in Oaxaca pushed thousands of students and local residents who had so far remained ambivalent towards the proposed education reform out to the streets in solidarity. Massive crowds in other parts of the country, including Mexico City, added their voices. Smaller demonstrations were held in cities across the world as well.

From the streets, the media and international forums, a loud and clear call is being made to the Mexican government. The demands are straightforward. First of all, Mexican authorities at all levels should seek and maintain dialogue with protesting civil society groups, among them the teachers’ unions. Secondly, they should direct law enforcement agencies to immediately cease the use of disproportionate force against civil society organisations and activists exercising their legitimate right to assemble and petition the authorities.

Third, they should initiate an independent investigation into the use of force against protestors and all related human rights violations. Fourth, they should adopt the best practices recommended by the UN Special Rapporteur on the rights to freedom of peaceful assembly and of association on the management of public assemblies. Last but not least, they should strengthen and effectively apply the protective institutions already in place, such as the Specialised Unit to Search for Disappeared Persons and the Protection Mechanism for Human Rights Defenders and Journalists. In fewer words, effective protection measures plus solid non-repetition guarantees: there’s the simple formula for change.