Fish Farming, a Challenge and Opportunity for Small Farmers in Brazil’s Amazon 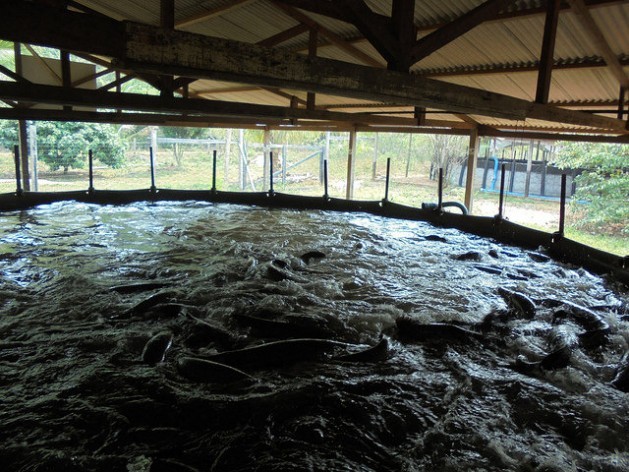 One of the seven tanks on Domingo Mendes da Silva’s farm in Santa Marta, in the northwestern Brazilian state of Rondônia, full of pirarucús or arapaimas, one of the biggest fish in the Amazonian jungle, which are ready to be sold when they reach 14 kilos, and which jump when they are fed. Credit: Mario Osava/IPS

SANTA RITA, Brazil, Sep 14 2016 (IPS) - Domingo Mendes da Silva has lost track of how many visitors he has received at his 10-hectare farm in northwest Brazil. He estimates “more than 500,” including aquaculture technicians, government officials, peasant farmers, journalists and other people interested in fish farming.

The attraction is the pirarucu or arapaima (Arapaima gigas), one of the largest fish in the Amazon jungle, which he breeds in seven black canvas fish tanks, “two for breeding and five for fattening.” Each tank contains 500 fish that are ready for sale in just over a year, when they reach around 14 kilos. In their natural habitat, they can weigh over 100 kilos.

“These fish grow very fast, gaining 10 kilos per year on average. Besides, you can use every part of the arapaima: the skin, the scales and even the faeces,” said Mendes, who for years had dreamed of becoming a fish farmer.

The opportunity came when he settled in Santa Rita, an agricultural community that received 153 families displaced by the San Antonio dam, one of two big hydroelectric plants built on the Madeira River, one of the Amazon River’s biggest tributaries.

Mendes, 57, a former “garimpeiro” or informal miner, told IPS on his farm that he became a farmer in 1999 when “gold became scarce” and he was settled under the Brazilian government’s land reform programme in Joana D’Arc, on the banks of the Madeira River, 120 kilometres from Porto Velho, the capital of the northwestern state of Rondônia.

Later he was resettled in Santa Rita by the company that built the dam, Santo Antônio Energía (SAE), because the land was going to be flooded by the reservoir.

“The soil is not very fertile here, but we have better access, since it’s near a paved road and the capital city,” said Mendes. His farm is five kilometres from interstate highway BR-364 which crosses Brazil from southeast to northwest, and Santa Rita is 54 kilometres from Porto Velho.

These factors encouraged him to breed arapaima in canvas tanks eight metres in diameter, which can produce 50 kilos of fish per cubic metre of water, compared to just one kilo by conventional methods, according to the rural technical assistance agency of Rondônia (Emater-Ro), which supports the project.

“The system is viable, but it’s hard work, the water has to be changed daily,” Mendes said. The wastewater does not pollute the river because it is used to irrigate the plantations of the açaí palm (Euterpe oleracea), whose fruit is widely consumed at a local level and is also exported.

Six hectares of the farm are devoted to growing fruit and vegetables. 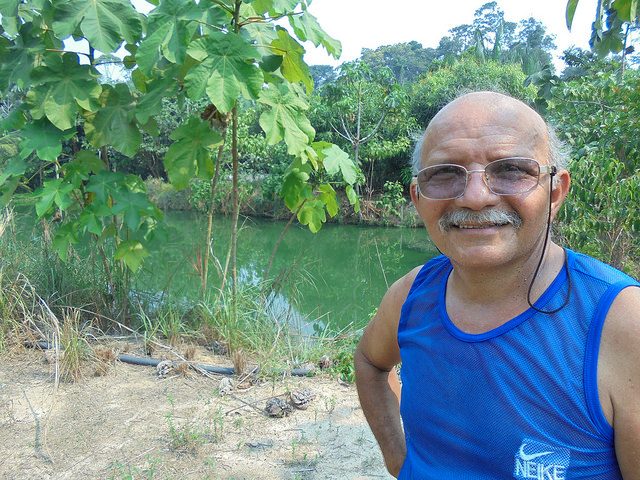 Domingo Mendes stands next to one of the tanks where he holds wastewater from raising pirarucú or arapaima fish, used to irrigate vegetable gardens, fruit trees and açaí palm trees, which he grows on part of his farm in Santa Rita, in northwest Brazil. Credit: Mario Osava/IPS

But the project runs the risk of a premature death, despite the commendations of Emater-Ro and the SAE. Mendes feels he is on his own. Fish farming with “fertigation” – the application of soluble fertilisers by means of an irrigation system – did not draw the hoped-for level of participation and has not received the necessary support from the state for a refrigeration plant and marketing mechanisms, he complained.

With the participation of 30 fish farmers organised in a cooperative, as was anticipated in the initial plan, costs could be cut and better prices achieved, making the business more productive and profitable and benefiting the diet of the local population, he said.

Fish is becoming more and more important for world food security, and aquaculture has been fundamental in increasing the food supply, according to the United Nations Food and Agriculture Organisation (FAO).

Aquaculture production provided only seven percent of the fish for human consumption in 1974, a proportion that went up to 26 percent in 1994 and to 44.1 percent in 2014. From 2009 to 2014 it grew 32.5 per cent, while capture fisheries amounted to 3.5 percent, according to the State of World Fisheries and Aquaculture, published this year by FAO.

This trend will become more pronounced in the next 10 years. In Latin America, fisheries are tending to stagnate, while fish farming is projected to grow nearly 40 percent.

This is a factor that drives up the costs of the breeding of arapaima, which is widely consumed in Brazil.

Ilce Oliveira, coordinator of Aquaculture and Fisheries in the Rondônia Secretariat of Agriculture (Seagri), told IPS that “their feeding costs are too high for a family farmer, government subsidies are needed.”

Arapaima need to be fed 40 percent protein, compared to 28 percent for other species, said Mendes. But this does not make production unprofitable because of how quickly they fatten, he explained.

Fish farming is a priority for the Rondônia state government, which is developing a programme to promote the activity, particularly breeding in net pens in hydropower reservoirs.

Seagri expects aquaculture production to reach 80,000 tons this year. In 2010 output amounted to just 12,000 tons. Production could grow fast because of the 8,000 rural properties with the infrastructure for fish farming, only half are selling part of what they produce.

The two problems that Mendes said he faces – feeling that he is on his own, and the high feeding costs – do not affect the alternative chosen by the Collective Rural Resettlement of Jirau, the other dam on the Madeira River, 120 km from Porto Velho and 110 km upstream the Santo Antônio dam.

Their Income-Generation Pilot Project combines fish farming and crop irrigation using wastewater. But they opted for the tambaqui or pacu (Colossoma macropomum), the Amazonian fish most widely consumed and farmed. 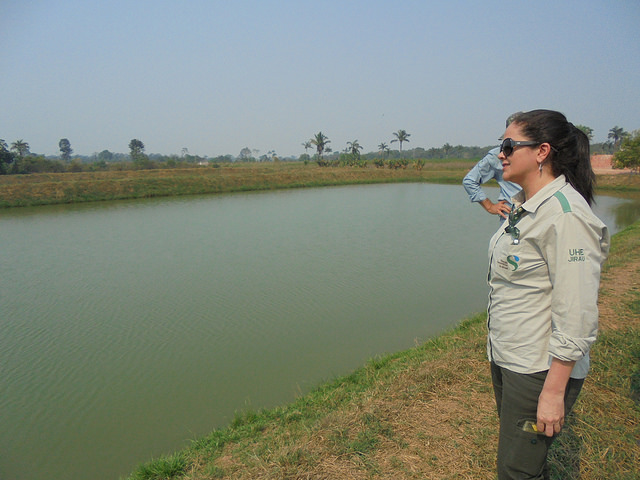 Domingo Mendes stands next to one of the tanks where he holds wastewater from raising pirarucú or arapaima fish, used to irrigate vegetable gardens, fruit trees and açaí palm trees, which he grows on part of his farm in Santa Rita, in northwest Brazil. Credit: Mario Osava/IPS

“It is the local species that has best adapted to tank breeding,” said Juliana Oliveira, in charge of socioeconomic affairs in ESBR, the consortium that built the Jirau hydroelectric plant.

Each of the four in-ground tanks produces up to five tons of fish per year, about 2,500 fish weighing two kilos on average, Miguel Lins, agronomist and environmental analyst for ESBR, told IPS.

The breeding tanks were built on high ground so water can drain on crops by gravity. However, this “fertigation” system is unusual, because the water with faeces and waste from fish farming contains too much ammonium, a fertiliser that in excess can damage crops, said Oliveira.

The project, financed by the company, seeks to assess the financial and environmental viability of this method of fish farming, while persuading and empowering the 22 families that are left in the resettlement, organised in the New Life Association. In 2011, 35 families were resettled but 13 have left.

The pilot project already provides a small income for the families, selling around 400 kilos weekly in nearby markets. That is not much when divided between all the families. But the plan is to build more tanks on the 75-hectare family plots, each of which contains 60 hectares of forest reserves.

They’re also making an effort to diversify production, with horticulture, fruit trees and forage plants adapted to the local ecosystem. The Brazilian government’s agricultural research agency, EMBRAPA, which played a fundamental role in Brazil’s agricultural development, is taking part in the project, testing varieties of bananas, pineapples and Amazonian fruits.

The undertaking is promoted by ESBR as a way to compensate for the environmental and social damage caused by the dam, and it is also supported by the Rural Producers’ Cooperative of Jirau, which groups 131 families displaced by the dam and resettled in other surrounding communities.

A structure like this, which ensures financial, technical and commercial support, is perhaps what Mendes’ isolated project – named “Piraçaí”, joining the names pirarucú and açaí palm – needs. Boosting its scale, through cooperatives or private and public investment, could turn it into a profitable business.