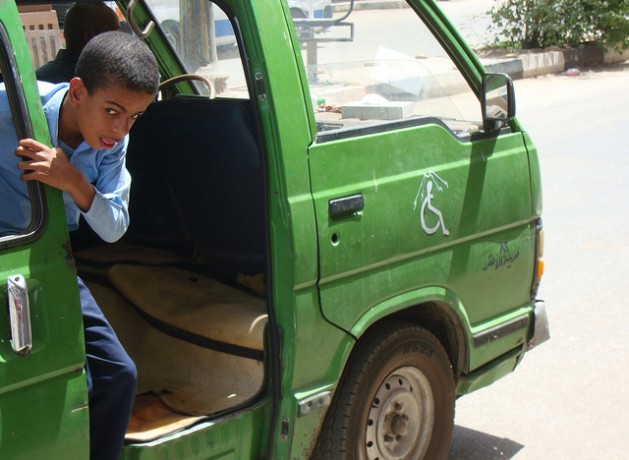 Egypt is one of many developing countries where there are few resources for children with disabilities. Credit: Cam McGrath/IPS.

Inclusive, equal and quality education for persons with disabilities is among the UN’s Sustainable Development Goals (SDGs) for 2030. It is also advocated for in the UN Convention on the Rights of Persons with Disabilities.

Despite these global commitments, global funding for inclusive education is declining, reveals the report published this week by the International Disability and Development Consortium (IDDC):

According to the report, there is a “significant cost of exclusion from education for both the children and the developing country – with countries losing billions of dollars of potential income.”

For example, “in Bangladesh, lack of schooling and employment for people with disabilities and their caregivers, could be losing the country US$1.2 billion of income annually, or 1.74 % of GDP” said Nafisa Baboo, Light for the World’s Senior Inclusive Education Advisor.

IPS spoke with Baboo, a disability advocate from South Africa who contributed research to the report, about what can be done to fix the funding gap and why it is so important.

“Early-years provision of inclusive education is particularly underfunded, despite the clear benefits it brings to subsequent education efforts."

Baboo makes the case for increasing domestic financing and investment. In a speech during the launch of the report at the UN, she emphasized that “giving pennies towards implementing policies on inclusive education for children with disabilities will never be enough for realising the system wide reform needed.”

Evidence from Bangladesh, Cambodia, India, Nepal and the Philippines indicates that the returns from disability-responsive investments are “two to three times higher than that of persons without disabilities,” according to the report.

Baboo noted that the issue of global tax evasion, which leads many developing countries to lose significant revenue, is harming governments ability to provide services such as inclusive education. Developing countries with the highest number of children with disabilities out of school “lose an estimated $139 billion annually from harmful (global) tax exemptions,” she said. She is confident that significant progress could result if governments could increase their revenues through improved global tax cooperation.

Further, she urged governments to adopt “disability-responsive budgeting” and to increase their focus on quality measures such as improving teacher education. For instance, said Baboo, properly used tax revenue in Tanzania could cover the cost of training all untrained teachers, plus 70,000 new teachers and the building of 97,000 accessible classrooms.

The report’s proposed solution for increasing funding and accelerating progress is the use of earmarked taxes- that is, “assigning revenue from specific taxes to targeted intervention.”

Targeted intervention towards inclusive education sub-sectors, such as early-intervention services for children with disabilities, would provide promising progress.

“Early-years provision of inclusive education is particularly underfunded, despite the clear benefits it brings to subsequent education efforts,” according to the report.

In addition to increasing disability-responsive budgets and budget transparency, Baboo called on governments to direct more efforts, reinforced by the international community, “towards collecting data on the number children with disabilities in and out of school, their disability type and any environmental barriers.”

The available data has been largely insufficient for a number of reasons. Baboo told IPS that “many countries lack the sophisticated technology to collect the data.” Moreover, data collectors “may not know what questions to ask or how to ask them” and there is often “disorganized record-keeping and poor sharing of data”.

The report indicates that positive steps have been made to improve data collection. These include the joint use of UNICEF’s Multiple Indicator Cluster Surveys (MICS) and the Washington Group on Disability Statistics. However, these tools are currently understaffed.

Further, Baboo told IPS that “many families either hesitate to admit their child has a disability owing to the fear of stigma or are simply unaware of the nature of certain disabilities, such as autism for instance, which may not be well-known in developing countries.” As a result, most of these children do not attend school and thus data collection from a national census might be unreliable.

The threat of stigma and lack of awareness, which results in disabilities in children being hidden or dismissed, makes it challenging to collect data.

“Ways that have been effective in addressing the stigma problem include community-based rehabilitation wherein community workers trained in disability rights and experiences target families exposed to disabilities and counsel them as well as help spot children with disabilities…they tell the families that it is not a shame or a curse for their child to have a disability,” said Baboo.

Additionally, “public demonstrations of political will and commitment to this issue can also play a significant role in tackling stigma, removing attitudinal barriers and encouraging teachers in their work” said Baboo.

According to the report, “most donor aid does not include amounts earmarked for disability or inclusive approaches.” Baboo told IPS that “the majority of funds often goes into special schools rather than to implementing inclusive education policies”.

However, the report indicates that “child-friendly, inclusive education brings better social, academic, health and economic outcomes for all learners, and at less costs than special or segregable schools.”

International funding is a key financial source for low income countries. The report therefore calls for a reversal of the global decline in aid for education- to avoid leaving children with disabilities “at the very back of the queue.”

“We are calling on all donors to make disability-responsiveness a core criterion in education funding across all portfolios, both with partner governments and with implementing contractors.”

“At the heart of it all, what is necessary is actually quite simple: acknowledgement of the urgency of the situation; planned and proper budgeting; and sharing of knowledge, best practices and data…because every child has the right to inclusive and quality education”, said Baboo.