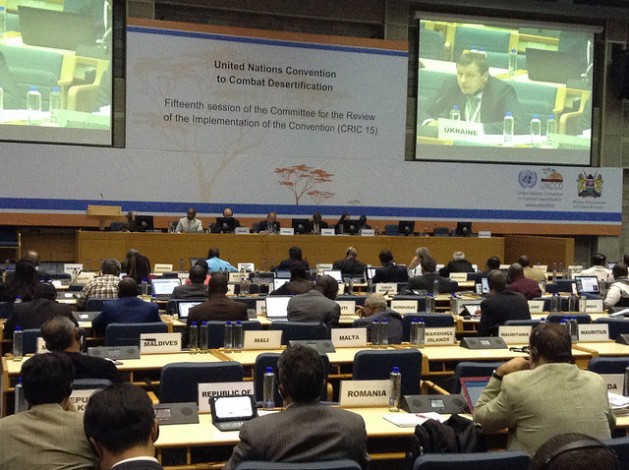 Delegates meeting at the Fifteenth Session of the Committee for the Review of the Implementation of the Convention (CRIC 15) of UNCCD held in Nairobi Oct. 18-20, 2016. Credit: Justus Wanzala/IPS

According to the United Nations Convention to Combat Desertification (UNCCD), two billion hectares of productive land are currently degraded worldwide. An additional 12 million hectares are degraded every year.

Delegates meeting at the Fifteenth Session of the Committee for the Review of the Implementation of the Convention (CRIC 15) held in Nairobi Oct. 18-20 all agreed that urgent action is needed to address the problem.

But for efforts to combat land degradation to succeed, huge financial resources must be mobilised.

It will support large-scale rehabilitation of degraded land, for sustainable and productive use, with long-term private sector financing. The fund also aims to contribute to the achievement of global and local food and water security, and to mitigate climate change by sequestering up to 20 percent of CO2 emissions by 2050.

The fund hopes to mobilise 50 billion dollars to rehabilitate 300 million hectares of land worldwide in the next 20 years, reducing carbon emissions by an estimated 20 billion tonnes.

The Global Mechanism is spearheading the establishment of the Fund. The Fund plans to provide a structured framework in which private and public actors will be able to engage with the aim of achieving Land Degradation Neutrality (LDN). The private-public partnership will include provision of funds and technical assistance.

The LDN concept was introduced at the Rio+20 Conference in 2012. According to UNCCD, attaining LDN means ensuring that the amount of land resources that every household, region or country depends on for ecosystems services such as water, remains healthy, productive and stable.

The resolve resonates with target 15.3 of the Sustainable Development Goals (SDGs) adopted by the UN in September 2015 in New York. The target is to achieve LDN by 2030.

The Global Mechanism, UNCCD’s operational arm, was identified as the body to administer the fund to support initiatives that aim to reach LDN.

The vision of the LDN Fund is to combat land degradation and finance rehabilitation of 12 million hectares of degraded land a year. When in place, it will also complement and leverage existing initiatives by creating a link between the bottom up approach (projects developed on the ground) and the top down initiatives (government targets, institutional initiatives).

Markus Repnik, managing director of the Global Mechanism, said that 450 billion dollars is required annually to combat land degradation and desertification. He noted that climate funding is growing but more resources are needed. Repnik added that states have spent 200 billion dollars but total financing is less than 400 billion dollars.

The Green Climate Fund (GCF), a financial mechanism under the United Nations Framework Convention on Climate Change (UNFCCC), is aiming to provide half of its funds for climate change adaptation measures. He noted that the African Development Bank (ADB) wants to triple climate financing by 2020.

Repnik said that there is abundance of funding initiatives and systems but there is no single measure to show how finances are being mobilised.

“In-depth data on global financing is required. It should be known how much has been spent, where it came and who provided it in addition to ensuring data compatibility and reliability,” said Markus.

He called upon parties to consider how they will mobilise resources to implement the convention. The EU delegation to the UNCCD’s CRIC 15 urged parties to explore more funding mechanisms instead of relying on multilateral partnerships. They said innovative measures to source funds from the private sector should be explored.

During the conference it was revealed that developing countries and their partners have contributed five billion dollars towards efforts to curb desertification and land degradation. However, delegates insisted that more money is urgently needed and the developed countries should provide more funds.

Representatives of community-based organisations (CSOs) noted that the cost per unit (hectare) in combating land degradation also varies from country to country.

“More precise and comprehensive information is required,” they noted in a statement.

They emphasized that financing of programmes to combat land degradation should incorporate human resources development. They also noted that the financing mechanism should involve the 500 million smallholder farmers across the world whose rights require protection.

“Vulnerable groups such as indigenous people and pastoralists should be targeted for support,” read the CSOs statement.

At the same time, parties recognised the need to mobilise additional financial resources for voluntary LDN target setting and implementation from multiple sources such the GEF, Green Climate Fund, LDN Fund (once operational), national budget allocations and the private sector.

They called upon the Global Environment Facility (GEF), an independent financial entity that works with countries and international institutions, CSOs and the private sector to address global environmental issues, and the Global Mechanism to provide the required support.

Richard Mwendandu, director of Multilateral Environment Agreements at Kenya’s Ministry of Environment and Natural Resources, said that although money can be mobilised to finance efforts towards meeting SDG 15.3, there is no specific global fund in place to support efforts to fight land degradation.

“Just a paltry 30,000 dollars has been issued by the Global Mechanism to assist countries on a pilot basis in the area of target setting as envisaged in the LDN concept,” he told IPS.

Mwendandu added that individual countries are trying to mobilise resources to combat land degradation. Citing the case of Kenya, he noted the government is mobilising funds in collaboration with United Nations Development Programme (UNDP) to fund projects aimed at fighting land degradation.

CRIC 15 was aimed enabling parties to UNCCD to agree to a post-2018 strategy.