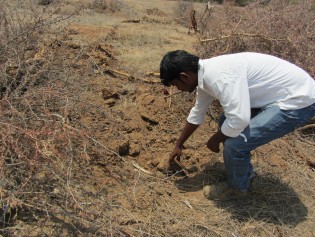 By Stella Paul
Tugging at the root of a thorny shrub known as ‘juliflora’, which now dots the village of Chirmiyala in the Medak District of southern India’s Telangana state, a 28-year-old farmer named Ailamma Arutta tells IPS, “This is a curse that destroyed my land.”

By Marcela Valente
How has Argentina managed to maintain its image as one of the world's breadbaskets when a full three-fourths of its territory consists of drylands? This was one of the questions raised by the scientists who decided to create the National Observatory on Land Degradation and Desertification this year.
ADVERTISEMENT ADVERTISEMENT