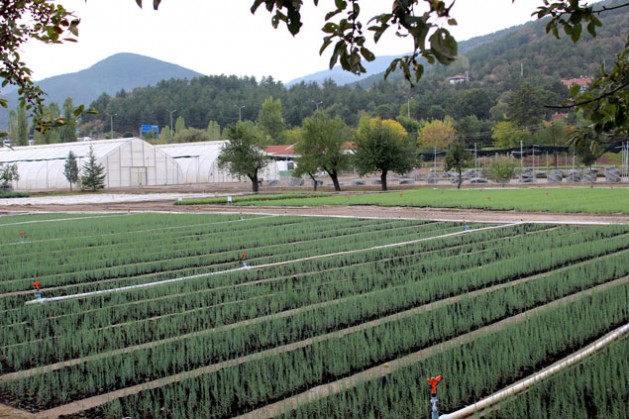 ANKARA, Turkey, Nov 16 2015 (IPS) - The world loses 23 hectares to land degradation each and every minute, adding up to the disappearance of 12 million hectares worldwide – an area half the size of the UK.

In economic terms this loss of healthy soil from arable land costs the world 400 billion dollars a year, including an annual food grain loss of 1.2 billion dollars.

Today as much as 2 billion hectares have the potential for restoration, an area larger than South America. Not only would restoring these lands deliver up to 2.3 billion tonnes of additional food, the UN Desertification Convention (UNCCD)estimates restoring the carbon storage capacity of land could reduce global warming by 0.5C by the end of the century.

In a major development, all 195 member-countries at the twelfth conference of parties to the UNCCD in October, agreed to voluntarily set their own targets to stabilize the amount of healthy and productive land resources they now have, by a two-pronged strategy of prevention and restoration – a process known as land degradation neutrality (LDN).

Underpinned by Sustainable Development Goal (SDG) 15, target 15.3, these land degradation neutrality targets should be achieved by 2030.

This ambitious global transition to a productive-soil economy will be done through an UNCCD backed privately managed action-financing platform, The Impact Investment Fund for Land Degradation Neutrality or the LDN Fund. It will mobilize 2 billion dollars every year primarily from the private sector. Financing will be through loans, including to small-holders and some co-investment. The LDN Fund, to be announced in December at the annual Conference of Parties in Paris, will become operational by end 2016.

“Private sector funds are available. Potential investors in the LDN Fund can be ‘enlightened.’ Pension funds who are turning away from dirty investment, businesses that innovate, even large ones under immense pressure from NGOs realize they will soon run into a wall unless they give up their unsustainable practices. The LDN Fund can be a huge driver for change among such businesses,” Repnik said.

“Money is a bottleneck. Public money is a challenge, we have to invest private funds,” he added.

The LDN Fund’s 2015 White Paper says it will help to scale up viable business models based on upgraded land that generate profitable financial returns while contributing to broader food, water and energy security goals. It proposes to do so through landscape approaches which will make possible trade-offs between all land-use sectors, including sustainable agriculture, livestock management and forestry, agro-forestry, renewable energy, infrastructure development and eco-tourism.

Many UNCCD civil society organisations (CSO) disagree. “All governments have money. It is more a question of political will,” South Africa-based Noel Oettle of the Environmental Monitoring Group told IPS.

“While a case can be made out for mobilizing private money, the difficulty that will arise is that many small-holders are on land where if there is any additional income, it should go to them and not transferred as profit for the investor.”

“The Global Mechanism’s White Paper from June 2015 proposes a model that includes getting governments to provide concessions to business operators to gain access to large so-called degraded or waste lands, for 10 – 20 years, to enable the these lands to be restored to profitable farming,” said Oettle adding, “In Ethiopia’s Gambela region and other places, documented cases show local people who may even hold land tenure, have fled the persecution that followed after acquiring the land lease by the powerful operator and armed forces.”

“While recognizing the significance of this initiative (LDN Fund), it nonetheless calls for caution, as while it intends to combat land grabbing, it actually constitutes at this stage an objective threat to all land users not in possession of official land ownership titles,” said Akambi Is Deen, a Benin-based CSO member.

“To make the financial mechanism for land neutrality a success capacity-building and creating awareness on the ground is important. If you want free prior and informed consent from people to rehabilitate their land you have to give them the tools to know what’s going on and what they can do to secure tenure and land-use rights,” Karen van Boxtel of Amsterdam-based CSO Both ENDS told IPS, adding that CSOs need to be involved in the implementation of LDN Fund in a more constructive manner.

“Countries must put in place a rigid framework of safeguards when accepting private funding,” Repnik agreed.

While the Global Mechanism White Paper mentions a set of standards and safeguards, Oettle echoed many of the CSO members’ concern, “any safeguard is as good as the system of ensuring they are applied and followed.” “We see in other projects how safeguards can be critical to the local population’s land rights,” said Boxtel.

“It is highly risky,” said Oettle, adding, “It is clear by the way that the UN system is swinging towards a big love affair with the private sector. Increasingly too, in several developing and underdeveloped countries we see governments favour business interests and private operators increasingly understand how to keep governments to remain supportive of them.”

“Consequently, for the LDN Fund you need to have a strong and big monitoring system in place. You need to spend money on that as well,” Oettle said.