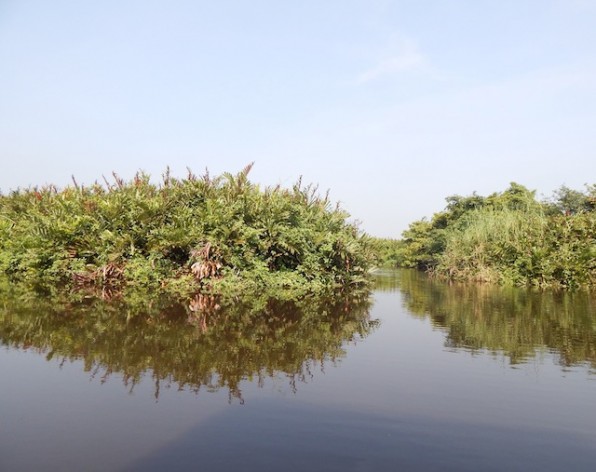 Mangrove forests, like this one in western Sri Lanka, can store up to 1,000 tonnes of carbon per hectare in their biomass, yet they are being felled at three to five times the rate of other forests. Credit: Kanya D’Almeida/IPS

UNITED NATIONS, Jul 6 2015 (IPS) - By 2050, we will be a world of nine billion people. Not only does this mean there’ll be two million more mouths to feed than there are at present, it also means these mouths will be consuming more – in the next 20 years, for instance, an estimated three billion people will enter the middle class, in addition to the 1.8 billion estimated to be within that income bracket today.

These changes are going to put unprecedented pressure on the world’s natural resources, according to a new report by the United Nations Environment Programme (UNEP)’s International Resource Panel (IRP).

Entitled ‘Policy Coherence of the Sustainable Development Goals: A Natural Resource Perspective’, the report warns that maintaining and restoring healthy ecosystems will be critical for the successful realisation of the U.N.’s post-2015 development agenda.

Unless the new development blueprint is centered on protecting and respecting the earth’s limited bounty, the goals of poverty eradication and ensuring decent lives for current and future generations will fall by the wayside, experts predict.

Based on current trends, resource use and extraction could hit 140 billion tonnes by 2050 – three times what was extracted in the year 2000, according to UNEP data.

“Due to declining ore grades, depending on the material concerned, about three times as much material needs to be moved today for the same ore extraction as a century ago, with concomitant increases in land disruption, groundwater implications and energy use,” UNEP said in a press release on Jul. 6.

Meanwhile, pressures on biotic resources are also on the rise, with 20 percent of cultivated land, 30 percent of the world’s forests and 10 percent of its grasslands being degraded at a rate that far outstrips the ability of such earth systems to replenish themselves.

Deterioration of ecosystems also threatens to worsen the impacts of climate change, contribute to water scarcity and exacerbate world hunger, with environmental experts fearing that 25 percent of total global food production could be lost by 2050 as a result of converging land and resource issues.

“The core challenge of achieving the SDGs will be to lift a further one billion people out of absolute poverty and address inequalities, while meeting the resource needs – in terms of energy, land, water, food and material supply – of an estimated eight billion people in 2030,” U.N. Under-Secretary-General and UNEP Executive Director Achim Steiner said Monday.

“The fulfillment of the SDGs in word and spirit will require fundamental shifts in the manner with which humanity views the natural environment in relation to human development,” he added.

Representing over 30 renowned experts and scientists, and as many national governments, the IRP today called for the “prudent management and use of natural resources, given that several Goals are inherently dependent on the achievement of higher resource productivity, ecosystem restoration and resource conservation”.

The report also urged policy makers to introduce practices based on a ‘circular economy’ approach, whereby reusing, recycling and remanufacturing products and other materials reduces waste by “decoupling” natural resource use from economic progress.

While the SDGs represent a bold and wide-reaching framework for ending some of the world’s most pressing problems – among them hunger and extreme poverty – avoiding counter-productive results will depend on a “commitment to maintaining the integrity of the Earth’s systems while addressing the resource demands driven by individual goals,” UNEP experts cautioned.

As the world’s population increases, and more people climb into the ranks of the middle class (defined by increased income and a corresponding rise in consumption), it will become crucial for individuals to adopt consumption patterns – and governments and corporations to adopt production systems – that contribute to human well-being “without putting unsustainable pressures on the environment and natural resources”, the report said.