BUENOS AIRES, Feb 25 2012 (IPS) - How has Argentina managed to maintain its image as one of the world’s breadbaskets when a full three-fourths of its territory consists of drylands? This was one of the questions raised by the scientists who decided to create the National Observatory on Land Degradation and Desertification this year. 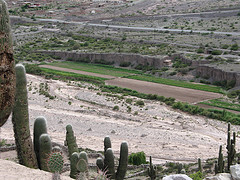 Despite Argentina's image as a land of pampas, most of the territory actually consists of drylands. Credit:Johnny Hunter/CC BY 2.0

“The idea is to prevent, curb and mitigate desertification,” agronomist Patricia Maccagno of the National Scientific and Technical Research Council (CONICET) told IPS.

Arid, semi-arid and sub-humid lands are vulnerable ecosystems that, if not effectively managed, are at risk of degradation and desertification, with the resultant loss of productive capacity.

In the book “Pobreza, desertificación y degradación de tierras” (Poverty, Desertification and Land Degradation), published by the Economic Commission for Latin America and the Caribbean (ECLAC), the regional U.N. agency reports that 25 percent of land in the region is drylands, most of it degraded.

In Argentina, a country that is identified worldwide with its pampas grasslands, the proportion of drylands is even higher, but the problem is not well-known. An estimated 75 percent of the territory consists of drylands, 40 percent of which already shows signs of desertification.

That makes the need to manage the world’s drylands in a sustainable fashion even more urgent.

The new observatory in Argentina, which will assess the levels of land degradation and desertification, will be coordinated by the Secretariat of the Environment and Sustainable Development and technical bodies like the National Institute of Agricultural Technology (INTA).

María Laura Corso, a technical adviser to the Secretariat’s office on soil conservation and the fight against desertification, told IPS that the idea of the observatory grew out of an international project that ended in 2011.

She was referring to the Land Degradation Assessment in Drylands (LADA) programme carried out from 2007 to 2011 in Argentina, China, Cuba, Senegal, South Africa and Tunisia.

At the request of the United Nations Convention to Combat Desertification, which calls for monitoring and reporting mechanisms, LADA was financed by the Food and Agriculture Organisation (FAO) and other international bodies.

Corso said the project helped develop a methodology to assess the state of land degradation, with the participation of experts as well as affected communities.

The observatory will continue to follow that approach, as part of a network of scientific and technical organisations and local communities, said Maccagno. “This will make better decision-making about these areas possible,” she added.

The LADA project produced a global report as well as specific reports on each country where it was implemented, such as “Evaluación de la Desertificación en Argentina: Resultados del Proyecto LADA/FAO” (Evaluation of Desertification in Argentina: Results of the LADA/FAO Project), published in late 2011.

The Argentine report says that, in order to maintain or improve its position as one of the world’s leading exporters of food, Argentina should use its technical capabilities to design sustainable management systems for its drylands.

Due to intensive use, these lands, in the northwest and centre-west of the country as well as the entire southern region, have entered into a downward spiral of degradation which, if not checked, leads to desertification and the loss of capacity to supply goods and services.

In the southern region of Patagonia alone, 84 percent of the territory is threatened by desertification, the study says. Once land has reached that stage, it becomes a nearly impossible – and overly costly – task to make it productive once again.

The Argentine study found that 50 percent of agricultural production and 47 percent of livestock production in Argentina occurs on drylands, which are home to 30 percent of the country’s 40 million people.

More than 40 percent of the country’s drylands are in a state of degradation.

“The state of degradation of these lands in Argentina is grave and requires urgent measures to bring about their recovery and improve the quality of life of the populations that live and work there,” the report says.

The expansion of the agricultural frontier, deforestation, overgrazing and forest fires are factors that have an extremely negative impact on these ecosystems, which are more fragile than they appear to be at first sight, the researchers warn, stressing that it is “absolutely essential” to design policies to protect drylands