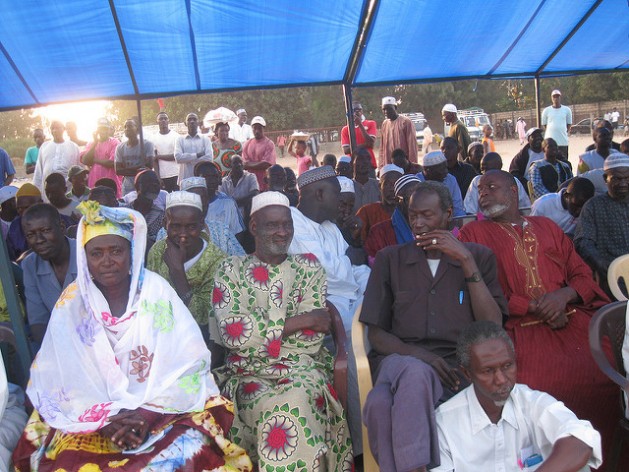 JOHANNESBURG, Nov 29 2016 (IPS) - “Dead men don’t vote,” said a Gambian political activist known as Mama Africa. She spoke during an event on the side-lines of the 59th Session of the African Commission on Human and Peoples Rights (ACHPR) held in Gambia’s capital Banjul last month.  The focus was the crackdown on freedom of expression and assembly ahead of the 2016 presidential elections.

Organised within the confines of the ACHPR which is headquartered in Banjul, this event was one of the very few open spaces where Gambian activists, journalists and citizens could openly and collectively speak about the restricted civic space and gross violations of human rights which have been the hallmark of President Yahya Jammeh’s regime.  They expressed their serious concerns about ongoing attacks on political opponents and those calling for change ahead of the next presidential elections, scheduled for 1 December 2016.

The elections may yet be the most significant since President Jammeh took power through a coup in 1994.  This will be the fifth time he seeks to be elected for another five-year term.

Members of several opposition parties have chosen Adama Barrow to head a coalition to challenge Jammeh. The successful formation of a coalition and general endorsement of one candidate is a major step forward by the political opposition – after 15 years of trying. In addition, for the first time since his accession to power, Gambians have defied the brutal nature of President Jammeh’s regime, overtly challenged him and called on him to reform the electoral system and institute democratic reforms.

In response to protests in May, President Jammeh said: “let me warn the evil vermin called the opposition. If you want to destabilise this country, I will bury you nine feet deep.”

The ruthless attacks against members of the political opposition and violent reprisals against peaceful protests are an indication of the challenges that lie ahead as Gambians prepare to go to the polls.  Between April and May 2016, the authorities used brute force to disperse peaceful protests organised by the United Democratic Party (UDP) calling for electoral reforms and transparency. On 14 April dozens of protesters were arrested and detained, several were injured and 51 were put on trial. Following the arrests, the Secretary General of the UDP died in detention. After more protests in May, 36 people were arrested and are now facing trial without any charges.

In total more than 90 people, both members of political opposition parties and ordinary citizens, have been arrested in 2016 alone. In response to protests in May, President Jammeh said: “let me warn the evil vermin called the opposition. If you want to destabilise this country, I will bury you nine feet deep.”

A few days before the official date for the start of election campaigning, the National Intelligence Agency arrested three journalists – Momodou Sabally and Bakary Fatty of the state-owned television and radio station and photo journalist Alhagie Manka. No official charges have been levelled against any of the three, but the arrest of staff working for a state-owned channel sends a clear message that no journalist will be spared from intimidation if they report objectively about the elections. The overall effect is that media will resort to self-censorship and avoid covering certain aspects of the elections – including the activities of the political opposition.

Since taking over power, President Jammeh has used assassinations, attacks, harassment, intimidation and repression to silence voices from civil society, journalists, members of the political opposition and ordinary citizens that criticised the actions of his government and call for democratic reforms. Hundreds of them have fled the country and sought refuge in neighbouring Senegal, Europe and North America. Others resort to self-censorship and citizens who have expressed views contrary the regime’s have been detained, simply disappeared, abducted, killed or harassed. The CIVICUS Monitor, which tracks civic space in different countries around the world, rates Gambia as “repressed,” just one step away from “closed”.

While Gambia’s recent decision to withdraw from the International Criminal Court has increased the spotlight on the West African nation, it will also have fundamental implications for its human rights regime.   It means victims of past and future human rights violations will have little recourse to hold perpetrators accountable as the judiciary is biased towards the government and the rule of law is selectively applied.  It also means members of the security forces and President Jammeh’s inner circle will continue to commit human rights violations with impunity in the absence of any institution that can hold them accountable for their actions.

In June 2015 Gambia expelled the EU’s charge d’affaires and gave no explanation for the decision.  Between 2014 and 2015, the EU withheld millions of euros in aid because of Gambia’s apparent disregard for the human rights and fundamental freedoms of its citizens. In November 2016 the Gambian government rejected a request made by the EU for election observers to monitor the December elections.  Before that in 2013, Gambia withdrew its membership from the Commonwealth of Nations saying it will “never be a member of a neo-colonial institution.”

Gambia’s frosty relations with members of the international community mean the Economic Community of West African States (ECOWAS) has the responsibility of ensuring that the country respects the rights of its citizens before, during and after the elections, in line with the regional body’s Protocol on Democracy and Good Governance.

ECOWAS must be prepared to set an example and suspend Gambia’s membership if Gambia uses violence and intimidation against political opponents, activists and journalists.