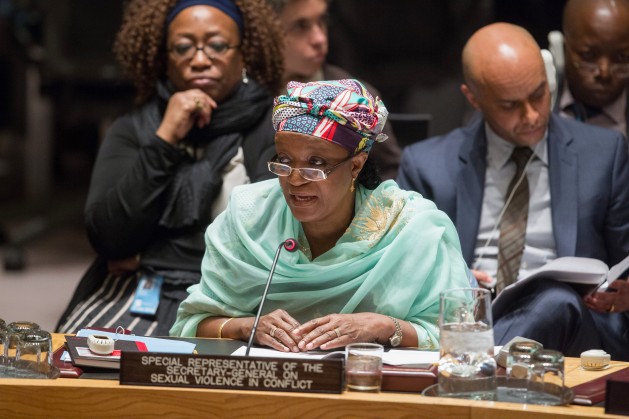 UNITED NATIONS, Nov 17 2016 (IPS) - The governments of Rwanda and Iraq have agreed to work together to fight rape as a weapon of genocide, noting disturbing similarities between sexual violence in Iraq today to the Rwandan genocide twenty years ago.

Just as targeted rape was as much a tool of the Rwandan genocide as the machete, an estimated 3000 Iraqi Yazidis under ISIL’s captivity are currently facing acts of genocide and targeted sexual violence, including sexual slavery.

The joint effort will be aimed at sharing action plans to rehabilitate women victims and reintegrate them into their communities.

Rwanda was the first country where rape was recognised as a weapon of genocide by an international court. This court case was the subject of a documentary, The Uncondemned, which recently premiered at the UN.

The documentary is centred around the case of Jean Paul Akayesu, the mayor of Taba in Rwanda between April 1993 and June 1994, who was brought before the International Criminal Tribunal of Rwanda (ICTR).

Akayesu was found guilty of nine counts of genocide and crimes against humanity, including the landmark conviction of rape as an act of genocide, in 1998.

“I decided to shame the act, I decided to put it out there, I wanted the truth to be known, but most importantly I wanted justice." Rwandan Witness "JJ".

Prior to the film screening, the Special Representative of the UN Secretary-General on Sexual Violence in Conflict, Zainab Bangura, described the importance of recognising rape as an act of genocide.

Bangura paid tribute to the Rwandan women who testified in the Akayesu trial as well as two Iraqi Yazidi women, one of whom is an ISIL rape survivor, present at the screening, and praised them for “giving other women the confidence to emerge from the shadows.”

A report to the UN human rights council has found that ISIL – also known as ISIS – has committed the crime of genocide against the Yazidis, an ethnically Kurdish religious group.

“The film demonstrates that only when survivors and civil society come together and join forces with investigators, prosecutors and policy makers, that justice can be delivered in its fullest sense,” said Bangura.

“The silver lining in these encounters is the exceptional courage and resilience of the rape victims to overcome their traumatic experience…they defied traditions and taboos by standing and speaking up, despite the fear of stigma and rejection or retribution from perpetrators,” said Jeanne D’arc Byaje, the Charge d’Affaires to the Permanent Mission of Rwanda to the UN.

Thousands of people were targeted with sexual violence during the Rwandan genocide, said the UN Secretary-General’s Special Adviser for the Prevention of Genocide, Adama Dieng.

According to Byaje, in a span of 22 years since the genocide, Rwanda has “been able to reverse the deplorable situation by eliminating gender-based abuse and violence to increase the capacity of women and girls to protect themselves.”

Byaje called for “an international community that is a partner and not a bystander…and that is willing to work towards long-term efforts to promote unity and reconciliation.”

Iraq’s Permanent Representative to the UN, Mohamed Ali Ahakim, similarly appealed to the international community for help with the dire situation faced by Yazidi, as well as other minorities, women and children currently under ISIL”s captivity.

“Young women and children have been specifically targeted by ISIL and are being systematically sold in slave markets sometimes for a dollar or a pack of cigarettes…this is a tragedy that has not been experienced before in any of Iraq’s diverse communities,” said Ahakim.

However, Ahakim said that the problem is not confined to the current situation – “it would be easy to work with a coalition of 65 countries to defeat ISIL militarily.”

“The main problem is what we are going to do next once we liberate Iraq and free the young women and children…I don’t have the ability to comprehend the difficulties that will be faced trying to infuse normality into these communities,” said Ahakim

From the testimonies given at the UN, after the film screening, by the Rwandan witnesses at the Akayesu trial and the Yazidi rape survivor, it is evident that justice is the most crucial component of any next-step action plans for survivors.

“I decided to shame the act, I decided to put it out there, I wanted the truth to be known, but most importantly I wanted justice…what happened to us was horrible but we are still here…and that is because of justice” said one Rwandan witness, known as “Witness JJ”.

Yazidi rape survivor of ISIL, 18 year old Lea Le, who escaped her captors by tying scarves together and using them to climb out of a window along with some friends, said that “we should not hide what happened, it is very important for justice to be carried out…it is unfair that survivors have to wait so long for justice.”

Asked about the impact of the Akayesu case on other war crimes trials, Ambassador Pierre R. Prosper, the lead prosecutor during the Akayesu trial, admitted that there have been some subsequent prosecutions as result of the international precedent set by Akayesu’s case.

However, “we have lost the momentum, the political will to deal with the issue of not just rape but other genocide atrocities in general…we are waving the flag of saying this is wrong but we are not acting,” said Prosper.

Prosper called for governments to direct resources to relevant entities to pursue accountability and ensure justice.

“We need to re-energise ourselves,” said Prosper.