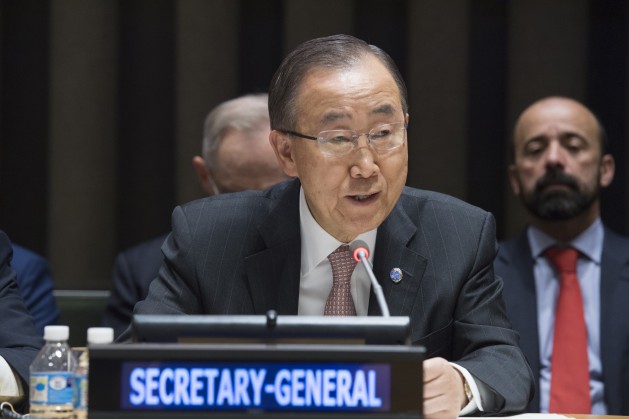 UNITED NATIONS, Dec 2 2016 (IPS) - For the first time, the United Nations issued a formal apology for their role in the cholera outbreak in Haiti and announced new steps to alleviate the ongoing health crisis.

Speaking to the members of the UN General Assembly, Secretary General Ban Ki-moon made an emotional statement, expressing his deep regret for the suffering and loss of life that resulted from the cholera epidemic.

“On behalf of the United Nations, I want to say very clearly: we apologise to the Haitian people. We simply did not do enough with regard to the cholera outbreak and its spread in Haiti. We are profoundly sorry for our role,” said Secretary General Ban Ki-moon Thursday.

Ban first delivered the apology, which was broadcast live on television in Haiti, in Creole, before switching to French and English.

The cholera outbreak, which occurred soon after the earthquake in 2010, killed nearly 10,000 and has to date infected close to 800,000, roughly one in twelve, Haitians.

We simply did not do enough with regard to the cholera outbreak and its spread in Haiti. We are profoundly sorry for our role,” Secretary General Ban Ki-moon.

Numerous reports including one by the U.S. Centres for Disease Control and Prevention pinpointed the appearance of the first cholera cases to the arrival of UN peacekeepers from Nepal.

Just one month before leaving office, Secretary General Ban Ki-moon noted that the cholera outbreak has created a “blemish” on the reputation of both UN peacekeeping and the organisation as a whole.

The UN first admitted its role in the cholera crisis in August when, during a briefing, spokesman Farhan Haq said that the that international organisation became “convinced that it needs to do much more regarding its own involvement in the initial outbreak.”

Desir Jean-Clair from Boucan Care, a cholera survivor whose mother died from cholera described the apology as a “victory.”

“We sent thousands of letters and were in the street to get this victory for them to say today that they were responsible,” he told The Institute for Justice & Democracy in Haiti. “They said that and we thank them. But it can’t end here. Because today there is still cholera in the whole country.”

While U.S. Senator Edward Markey, who had called for the apology, stated that it was “overdue” and is an “important first step for justice” for Haitians.

“The people of Haiti have long deserved more than just acknowledgment for the pain and sacrifice they have suffered in great part due to UN negligence,” said the top Democrat on the U.S. Senate Subcommittee on Africa and Global Health Policy.

Though it does represent a shift after over six years of denial of involvement or responsibility on the part of the UN, the apology stops short of explicitly acknowledging the responsibility of the UN in introducing cholera into Haiti.

“We now recognise that we had a role in this, but to go to the extent of taking full responsibility for all is a step that would not be possible for us to take,” said Deputy Secretary General Jan Eliasson during a briefing.

He noted the major reason for the limitation is to ensure the continuation of peacekeeping and humanitarian operations.

“We have to continue to do this work, There might be tragic mistakes in the future also, but we have to keep that long-term perspective,” he said.

The apology also comes after a U.S. appeals court upheld the UN’s immunity in August from a lawsuit filed on behalf of thousands of Haitian cholera victims.

Eliasson noted that the court decision helped protect key UN peacekeeping and humanitarian operations. It was therefore a “triggering” point for the apology and roadmap, he added.

“That is the reason we can now move forward to take this position of accepting moral responsibility and go to the extent that we express an apology…that is a way for us to send a message of support,” Eliasson stated.

However, words can only go so far, both Eliasson and Ban Ki-moon said.

In a report, the Secretary-General lays out a new two-track approach in order to reduce and end cholera transmission and long-term development of the country’s water, sanitation and health sectors respectively. Though work on track one is already underway, including the deployment of rapid response teams and vaccination programs, track two still is yet to be determined as consultations are ongoing.

Ban proposed a community approach for track two, working directly with the most affected Haitians. Though individual reparations could still be an element, Ban noted the difficulties to carry out such a program including the identification of deceased individuals and ensuring the provision of a meaningful fixed amount per cholera death.

The organisation has requested a total of $400 million over two years for the program, and has set up a voluntary funding system for both tracks. So far, an estimated $150 million has been received.

In order for the UN to achieve its ambitious program, it requires UN member states to make voluntary contributions.

“UN action requires member state action. Without your political will and financial support, we have only good intentions and words,” Ban said.

“With their history of suffering and hardships, the people of Haiti deserve this tangible expression of our solidarity,” he concluded.