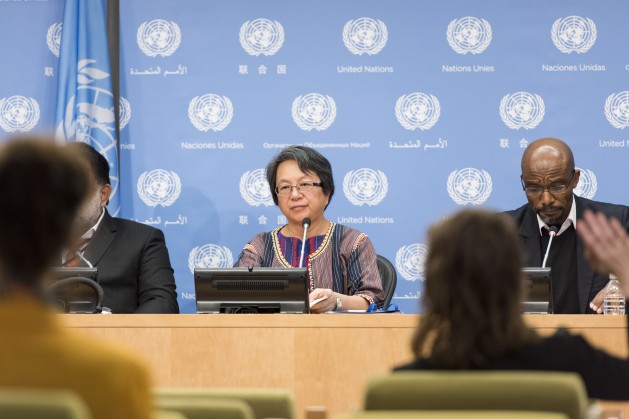 UNITED NATIONS, Jan 26 2017 (IPS) - As the 10-year anniversary for the Declaration on Indigenous Rights approaches, UN indigenous rights activists came together to assess the many challenges that still remain on the ground.

The UN Declaration on the Rights of Indigenous Peoples, adopted in 2007, is the first of its kind to recognise and highlight the importance of indigenous rights.

“The UN Declaration is a declaration that contains the collective nature of the rights of indigenous peoples. (It) is meant to bring about remedies to kinds of historical and current injustices that indigenous people suffer,” said UN Special Rapporteur Victoria Tauli-Corpuz during a press briefing on 26 January.

Though it is not legally binding, the declaration guarantees indigenous groups rights to self-determination, land, and to live free from any kind of discrimination.

However, Tauli-Corpuz noted that there are “serious retreats” in the implementation of indigenous rights, including the threat of tribal land being taken away by extractive industries.

Issues around DAPL even reached the halls of the United Nations, prompting Tauli-Corpuz to call on the U.S. government, in accordance with its commitment to implement the Declaration, to consult with indigenous groups who were denied access to information and excluded from the planning processes.

She reiterated this call, stating: “It’s regrettable that now in spite of those demands that have not yet been met…that kind of decision has to be again consulted with the indigenous peoples themselves because at the end of the day, they are the ones who will be directly affected.”

Special rapporteurs are independent experts appointed by the UN Human Rights Council – they are not UN staff.

Though the Department of the Army announced that it has begun an Environmental Impact Statement (EIS) on the $3.8 billion project, critics say that plans for DAPL were initially fast tracked as the U.S. Corps of Engineers did not adequately assess the potential for oil spills or its impact on the environment.

According to federal data, pipeline spills are fairly common, increasing the risk of water contamination. Between 2010 and 2013, there were almost 2000 incidents of leaks, amounting to an average of 1.6 incidents per day. Oil extraction, transport and combustion also accelerate emissions of methane and carbon into the atmosphere, contributing to global warming and climate change.

In response to President Trump’s executive orders to continue the construction of DAPL, Chairman of the Standing Rock Sioux Tribe David Archambault II said: “We are not opposed to energy independence. We are opposed to reckless and politically motivated development projects, like DAPL, that ignore our treaty rights and risk our water.

“Creating a second Flint does not make America great again,” he added referring to the town in Michigan where drinking water is still contaminated with lead.

Friends of the Earth’s President Erich Pica said that the decisions reflect President Trump’s disregard for the “millions of Americans who fought to protect our land, water, sacred cultural sites and climate from dangerous pipelines.”

“This law…is really not consistent at all with international human rights law…how can you justify running over or violently treating a protestor when every person has the right to protest?” she said, adding that indigenous people are simply protecting the rights to their lands.

Tauli-Corpuz stressed the need for countries to incorporate the UN Declaration into national plans and legislation in order to ensure indigenous rights.

“My message is for indigenous peoples to continue to assert and claim their rights as enshrined in the UN Declaration, but also to call in the States to really fulfill their obligation to comply and implement the UN Declaration on the Rights of Indigenous Peoples,” Tauli-Corpuz stated.

“What we need to do now is to really use this 10th year of the celebration of the UN Declaration to further strengthen dialogue,” she said.