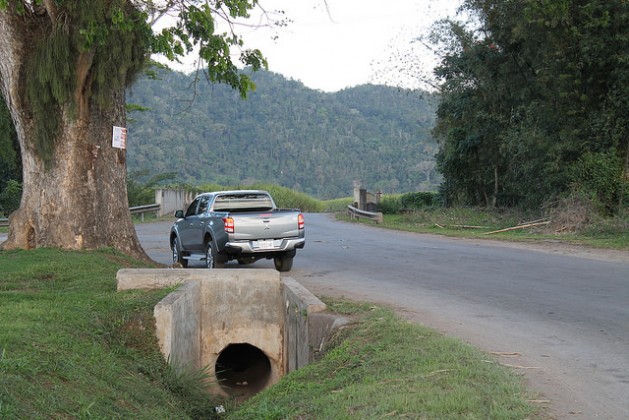 Dry drains will reduce the numbers of mosquitoes breeding, but now the Aedes aegypti mosquito is going underground to breed underground in available water and flying to feed. Credit: Zadie Neufville/IPS

KINGSTON, Jamaica, Apr 18 2017 (IPS) - There were surprised gasps when University of the West Indies (UWI) Professor John Agard told journalists at an Intergovernmental Panel on Climate Change (IPCC) meeting in late November 2016 that mosquitoes were not only living longer, but were “breeding in septic tanks underground”.

For many, it explained why months of fogging at the height of Zika and Chikungunya outbreaks had done little to reduce mosquito populations in their various countries. The revelation also made it clear that climate change would force scientists and environmental health professionals to spend more time studying new breeding cycles and finding new control techniques for vector insects.

“Globally, we predict that over 2.17 billion people live in areas that are environmentally suitable for ZIKV transmission." --Dr. Moritz Kraemar

Jump to March 31, 2017 when the UWI and the government of Jamaica opened the new Mosquito Control and Research Unit at the Mona Campus in Kingston, to investigate new ways to manage and eradicate mosquitoes. Its existence is an acknowledgement that the region is looking for improved management and control strategies.

Agard was reporting on a study by the late Dave Chadee, a co-author on the IPCC Fifth Assessment Report and UWI professor. The study examined evolutionary changes in the life cycle of the Aedes aegypti mosquito, which spreads the yellow and dengue fevers as well as the chikungunya and Zika viruses.

“We found out that in higher temperatures, the mosquito’s breeding cycle shortens. They go through more cycles during the season and they produce more offspring. The mosquitoes, however, are a little smaller,” Agard told journalists.

Even more worrisome were Chadee’s findings on the longevity of the “evolved” mosquitoes – 100 days instead of the 30 days they were previously thought to survive. The study also found that mosquitoes that survived longer than 90 days could produce eggs and offspring that were born transmitters, raising new concerns.

Alarming as these findings were, they were only the latest on the evolutionary strategies of vector insect populations in the Caribbean. A study published in February 2016 revealed that the triatomino (or vinchuca), the vector insects for Chagas disease, were breeding twice a year instead of only in the rainy season. And before that in 2011, Barbadian Environmental officers found mosquitoes breeding in junction boxes underground.

Sebastian Gourbiere, the researcher who led the Chagas study, pointed to the need for regional governments to re-examine their vector control methods if they are to effectively fight these diseases.

“The practical limitations that the dual threat poses outweigh the capabilities of local vector teams,” he said in response to questions about the control of Chagas disease.

Caribbean scientists and governments had already been warned. The IPCC’s AR 5 (2013) acknowledged the sensitivity of human health to shifts in weather patterns and other aspects of the changing climate.

“Until mid-century climate change will act mainly by exacerbating health problems that already exist. New conditions may emerge under climate change, and existing diseases may extend their range into areas that are presently unaffected,” the report said.

Gourbiere agrees with Agard and other regional researchers that there is need for solutions that are primarily focused on vector controls: eradication and effective controls of the Aedes aegypti could also eliminate the diseases they spread.

The failure of the newest vector control strategies also forced health professionals to revisit the old, but proven techniques developed with the guidance of researchers like Chadee, whose work on dengue and yellow fever, malaria and most recently the Zika virus had helped to guide the development of mosquito control, surveillance and control strategies in the Caribbean.

And while Zika brought with it several other serious complications like microcephaly, which affects babies born to women infected by the virus, and Guillain Barré Syndrome, the threats also exposed more serious concerns. The rapid spread of the viruses opened the eyes of regional governments to the challenges of emerging diseases and of epidemics like ebola and H1N1.

But it was the World Health Organisation (WHO) that raised concerns about the status and possible effects of the Neglected Tropical Diseases (NTDs) – a group of communicable diseases including the Zika virus – which affect more than a billion people in 149 countries each year but for which there are no treatments.

NTDs include Dengue, Chic-V and Chagas Disease and until the last outbreak in 2014 that killed more than 6,000 people, Ebola was among them. In the previous 26 outbreaks between 1976 and 2013, only 1,716 people in sub-Saharan African nations were infected, WHO data showed.

Now the Caribbean is changing its approach to the study and control of vector insects. So while there are no widespread infections of Chagas disease, UWI is preparing to begin its own studies on the triatomino and the disease it transmits.

An addition to UWI’s Task Force formed just over a year ago to “aggressively eliminate” breeding sites for the Aedes aegypti mosquito, the Mosquito Unit is expected to build on Professor Chadee’s groundbreaking research.

“From dealing with the consequences of Chikungunya, Dengue and Zika on our population to managing the potentially harmful effects of newly discovered viruses, the benefits of establishing a unit like this will produce significant rewards in the protection of national and regional health,” UWI Mona Professor Archibald McDonald said at the launch.

Zika had been infecting thousands of people in Asia and Africa for decades before it made its devastating appearance in Brazil and other parts of Latin America and the Caribbean. Zika also made its way to the US and several European nations in 2016, before being confirmed in Thailand on Sept 30.

Not surprising, as in its 3rd AR, and most recently in the 5th AR the IPCC projected increases in threats to human health, particularly in lower income populations of mainly tropical and sub-tropical countries. Those findings are also supported by more recent independent studies including Mapping global environmental suitability for Zika virus, published by the University of Oxford (UK) in February 2016.

By combining climate data, mosquito prevalence and the socio-economic makeup of each region, researchers found the likelihood of the Zika virus gaining a foothold worldwide to be “extremely high”. The team led by Moritz Kraemer also concluded that Zika alone could infect more than a third of the world’s population.

The findings noted that shifts in the breeding patterns of the Aedes family of mosquitos allowed it to take advantage of newly ‘favourable conditions’ resulting from climate change. The environmentally suitable areas now stretch from the Caribbean to areas of South America; large portions of the United States to sizeable areas of sub-Saharan Africa; more than two million square miles of India “from its northwest regions through to Bangladesh and Myanmar”; the Indochina region, southeast China and Indonesia and includes roughly 250,000 square miles of Australia.

“Globally, we predict that over 2.17 billion people live in areas that are environmentally suitable for ZIKV transmission,” Dr. Kraemar said.

The Aedes aegypti mosquitoes’ efficiency at spreading diseases in urban areas and population densities are believed to be the main factors driving the rapid spread of the Zika virus. Other studies have found the Zika virus in 19 species of the Aedes family, with the Asian Tiger Mosquito (Aedes albopictus) – which has now spread its range to Europe –  likely another efficient vector.

Back in the Caribbean, Chadee’s findings on the adaptation of the Aedes aegypti mosquito from clean water breeders to breeding in available waters is expected to drive the development of regional strategies that are better suited to the evolving environment of a changing climate.