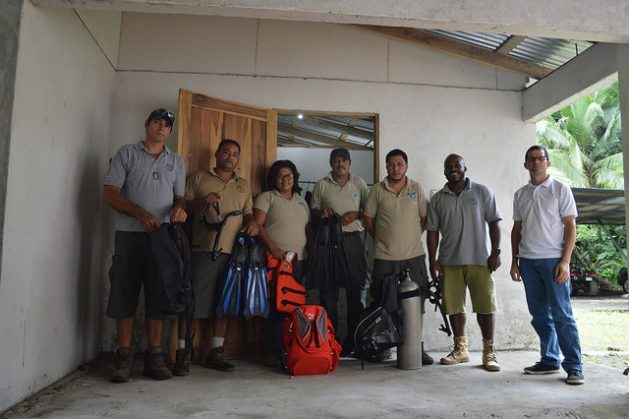 Staff from the National Cahuita Park and community activists who work in this protected area in the Southern Caribbean region of Costa Rica, standing next to the equipment purchased with funds from international cooperation on climate change. Credit: Diego Arguedas Ortiz/IPS

SAN JOSE, Jul 31 2017 (IPS) - Despite the fact that Central America is one of the regions most vulnerable to climate change, it has half-empty coffers when it comes to funding efforts against the phenomenon, in part because it receives mere crumbs in foreign aid to face the impacts of the rise in temperatures.

According to a study released in June, Central America received just 0.7 per cent of global climate finance – only 211.65 million dollars – between 2003 and 2016.

That means that of every 100 dollars of foreign aid destined to climate change, only 70 cents went to Central America.

The report was prepared by the Guatemala-based Central American Institute for Fiscal Studies (Icefi), and the Humanist Institute for Development Cooperation (Hivos), a Dutch development organisation, using data from Climate Funds Update.

“Although Central America is highly vulnerable to the effects of climate change, the countries in the region have failed to design a strategy for raising more funds to address the issue,“ Lourdes Molina, the Icefi researcher who headed the study, told IPS.

All of the countries in Central America are on the Caribbean Sea with the exception of El Salvador, and this is one of the most vulnerable regions in the world to climate change.

According to the Global Climate Risk Index developed by Germanwatch, which monitors the impacts of weather-related loss events, the most vulnerable country in the world during the 1995-2015 period was Honduras, while Nicaragua was the fourth and Guatemala the tenth most vulnerable.

The remaining three per cent was support for regional projects, said the report.

In December 2015 the countries of Central America called on the international community for the Paris Climate Agreement to recognise this region as especially vulnerable to climate change, a label assigned to small island states and the so-called least-developed countries.

But the proposal did not make it into the final text of the landmark agreement agreed by 196 countries in Paris.

Molina said financing to cope with the effects of climate change is important since it “is a reality that has a direct impact on people’s well-being, that fuels poverty and inequality and affects economic growth.“ 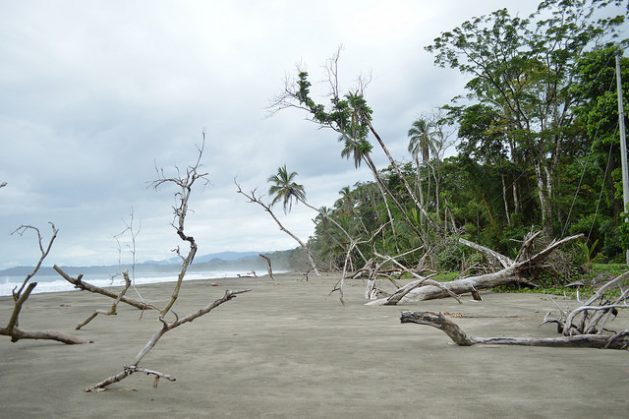 Puerto Vargas beach, in the province of Limón, in Costa Rica’s Southern Caribbean region. The area is highly vulnerable to coastal erosion and dozens of metres of beach have been lost in the past few years. Credit: Diego Arguedas Ortiz/IPS

The expert said that one problem with respect to access to financing is that the processes for allocation of funds are slow.

According to Molina, of all the funds pledged by industrialised countries by means of any mechanism between 2003 and 2016, only 43.8 per cent have been approved so far for specific projects.

She said the Caribbean island nations are in a similar situation with regard to access to funds.

She explained that the Caribbean received 285.6 million dollars. Due to their high vulnerability to the rise in sea level and extreme climatic events, the islands in the region are extremely vulnerable to impacts associated with climate change.

Added to this is their vulnerable economic and social conditions, which make them a breeding-ground for risky situations to explode.

In the Caribbean, 70 per cent of the funds are dedicated to mitigation (reducing emissions that heat up the atmosphere), 22 per cent to adaptation (preparedness to face negative impacts) and the rest to mixed projects.

In Central America, the proportion is different: 64 per cent goes to mitigation, 33 per cent to adaptation and the rest to initiatives that combine both components.

“Even though they have more resources allocated to mitigation, the funding falls short to cover both objectives, which means theregion should join efforts to raise more funds,“ Molina said.

To face the challenges, governments in the region are preparing to ask for 400 million dollars from the Green Climate Fund, which operates within the UN Framework Convention on Climate Change (UNFCCC). The Convention coordinates the annual conferences of the parties (COP), where the commitments to curb global warming are negotiated.

This amount would enable them to tackle climate change in Central America’s so-called Dry Corridor, an arid strip which runs along the isthmus from Guatemala to Costa Rica.

An example of the funds that have arrived is the project portfolio of the UNFCCC’s Adaptation Fund, which in Costa Rica is managed by the non-governmental Fundecooperación and prioritises the water and agricultural sectors and coastal areas.

In 2013, the Adaptation Fund approved 10 million dollars for Costa Rica to finance one of its 40 initiatives. This is one of the main foreign aid contributions in the country.

In the Cahuita National Park, the project made it possible to purchase diving gear and other equipment for monitoring sea turtle nesting by the Participatory Monitoring Unit, restore the coastline with trees, and train staff.

Three years ago, Marcia Cortés and two other staff members learned to scuba dive as part of their training for monitoring coral reefs, to keep track of the health of the reefs in the waters of the Cahuita park in Costa Rica’s Southern Caribbean region.

Since the nature reserve did not have its own diving gear, it was impossible for the staff to study the underwater ecosystem.

The solution came in June 2017 when a project linked to the Adaptation Fund paid the 15,000 dollars to buy the diving gear needed to monitor the nesting of turtles on the park’s beaches.

For its part, the Park contributes skilled labour – by Cortés and her colleagues – and equipment and installations needed for them to do their job.

Instead of being passive receivers of foreign aid, the countries should start to channel their own resources toward actions to tackle the effects of climate change, Marianela Feoli, the head of Fundecooperación, told IPS.

“This has to happen, because otherwise there is no sustainability, and projects depend exclusively on foreign funds. If they do not do so, projects only survive as long as there is international cooperation,“ she said.