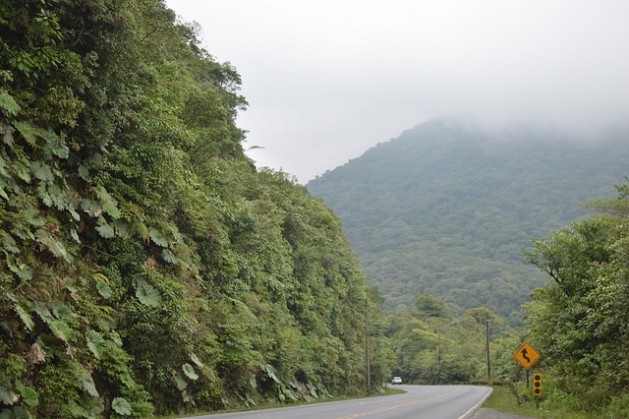 In its national contribution, Costa Rica said the sector most vulnerable to climate change is road infrastructure. This highway, which connects San José with the Caribbean coast, and which crosses the central mountain chain, is closed several times a year due to landslides. Credit: Diego Arguedas Ortiz/IPS

SAN JOSE, Oct 30 2015 (IPS) - For decades, the countries of Central America have borne the heavy impact of extreme climate phenomena like hurricanes and severe drought. Now, six of them are demanding that the entire planet recognise their climate vulnerability.

An initiative that has emerged from civil society in Central America wants the new binding universal climate treaty to acknowledge that the region is especially vulnerable to climate change – a distinction currently given to small island developing states (SIDS) and least developed countries (LDCs).

In the climate Oct. 19-23 talks in Bonn, Germany, the proposal found its way into the draft of the future Paris agreement. If it is approved, Central America could be given priority when it comes to the distribution of climate financing for adaptation measures – which would be crucial for the region.

“Civil society – and I would dare to say the governments – have been demanding this because it could give the region access to windows of financing, technology and capacity strengthening,” said Tania Guillén, climate change officer at Nicaragua’s Humboldt Centre.

“Civil society – and I would dare to say the governments – have been demanding this because it could give the region access to windows of financing, technology and capacity strengthening.” -- Tania Guillén

These contributions, the expert told IPS, “should go towards the benefit of vulnerable communities” in this region. But for now, only SIDS and LDCs have a priority.

Semantic disputes have taken on great importance, a month before the start of the Nov. 30-Dec. 11 21st session of the Conference of the Parties (COP21) to the United Nations Framework Convention on Climate Change (UNFCCC) in Paris, where the new climate treaty is to be approved.

That is because the language used will form part of the foundations on which the legal bases of the agreement will be set.

Central America’s 48 million people live on the isthmus that separates the Pacific Ocean from the Caribbean Sea, along whose length stretches a mountain chain and an arid dry corridor.

Nearly half of the region’s inhabitants – 23 million, or 48 percent – live below the poverty line, according to official statistics.

The issue of climate vulnerability – the set of conditions that make a society or ecosystem more likely to be affected by extreme climate events – has been on Central America’s agenda for years, since Hurricane Mitch’s devastating passage through the region in 1998 forced a rethinking of risk management.

As part of this process, the Vulnerable Central America, United for Life Forum was born in 2009 – a civil society collective that has pushed for the region to be declared particularly subject to the consequences of climate change.

Over the last year, climate impacts have caused human and material losses throughout Central America, from the catastrophic mudslide in Cambray on the outskirts of Guatemala City to the sea level rise threatening Panama’s Guna Yala archipelago in the Caribbean Sea.

The most widely extended of these impacts has been the drought associated with the El Niño Southern Oscillation (ENSO), a climate phenomenon which complicated agricultural conditions in Central America’s so-called dry corridor.

The corridor is an arid stretch of dry forest where subsistence farming is the norm and where rainfall was 40 to 60 percent below normal in the 2014-2015 dry season.

If successful, the call for the region to be recognised as especially vulnerable would make it a priority for climate change adaptation financing and technology.

But it will not be easy to reach this goal in the negotiations, as it is hindered by other countries of the developing South and even by some in this region itself.

The tension first arose within the Central American Economic Integration System (SICA), which held three meetings during the October climate change talks in Bonn, but failed to reach a consensus on the initiative, due to internal opposition from Belize.

“It must be pointed out that (SICA members) Belize and the Dominican Republic are SIDS, which means that to avoid problems with that negotiating bloc they did not back the proposal,” Guillén said.

In his view, “the painful thing is what Belize is doing, because the Dominican Republic is in a different situation,” since it is not actually part of the Central American isthmus, but is a Caribbean island nation.

Although Belize is on the mainland, it joined the SIDS in the climate talks.

The head of the Guatemalan government’s delegation to the climate talks, Edwin Castellanos, confirmed to IPS that no consensus was reached within SICA.

For that reason, “the proposal was made by El Salvador, as current president of SICA, but it was not made in the name of SICA because member countries did not back the motion.” It was also signed by Costa Rica, Guatemala, Honduras, Nicaragua and Panama.

Castellanos also noted that there are other countries seeking to be included on the list of the most vulnerable countries, an issue that was addressed within the powerful Group of 77 and China negotiating bloc, which represents the countries of the developing South.

“When Central America presented this initiative, Nepal followed it with a similar proposal for mountainous countries. The problem is that this starts off a list that could be interminable, and which already includes the LDCs, islands, and most recently, Africa,” the negotiator said.

He acknowledged that the initiative came from Central American civil society, and mentioned in particular the Mexico and Central America Civil Society Forum held Oct. 7-9 in Mexico City, ahead of COP21.

Alejandra Granados, a Costa Rican activist who took part in the civil society forum, told IPS that the proposal was set forth by Alejandra Sobenes of the Guatemalan Institute for Environmental Law and Sustainable Development (IDEADS), and that “each organisation sent it to the negotiators for their respective countries” prior to the meeting in Bonn.

The Central American countries that have already submitted their Intended Nationally Determined Contributions (INDCs) to the UNFCCC agreed on including adaptation components to which governments have committed themselves.

El Salvador and Nicaragua have not yet presented their INDCs, the commitments that each nation assumes to reduce carbon dioxide and other greenhouse gas emissions to fight global warming.

Granados said that, if Central America is recognised as especially vulnerable, the countries of the region will have to work hard together with local communities to improve their adaptation plans prior to 2020, when the new treaty will go into effect.

“This recognition is not an end in itself; it is a major responsibility that the region is assuming, because it is as if at an international level all eyes turned towards the region and said: ‘Ok, what are you waiting for, to do something? You wanted this recognition, now assume your responsibility to take action’,” said the Costa Rican activist, who heads the organisation CO2.cr.