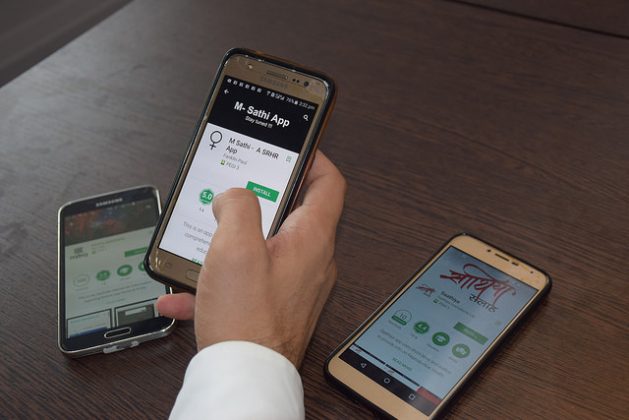 Digitizing SRHR communication: some of the popular mobile phone apps currently used in India by the government and an NGO. Credit: Stella Paul/IPS

LONDON, Jul 17 2017 (IPS) - Online shopping may have its pros and cons, but when it comes to buying products that have an invisible morality tag, it’s the safest possible option, believes Franklin Paul.

One of India’s most vocal advocates for youth rights to sexual health, education and products, Paul has spent over two years studying and introducing digital technologies to India’s rural youths. “One day soon, nobody will have to walk into a store to buy condoms, face the nosey chemist and feel embarrassed. They will just order it from their mobile phone or tablet or laptop and and get it delivered on their doorstep,” he says .

"Health workers themselves feel embarrassed to talk of sex and contraceptives, but if that information is available on the mobile screen, nobody will have to be embarrassed." --Kamla Mukhi

Talking to IPS on the sidelines of the London Family Planning Summit held last week, Paul shared his personal experiences of talking to youths in the East Champaran district of Bihar, one of India’s most underdeveloped states. The government has just introduced sex education in the state’s schools, but for young men and women, it is difficult to get the correct information on reproductive health.

To help them, Paul and his fellow youths launched a cellphone application called M Sathi. Available now on Google Play, the app provides information in a fun and interactive way where users can learn about sex and related issues through games and quizzes.

The campaign aligns well with the government’s plan to advance and improve sexual and reproductive health and rights (SRHR) in the country, says Chandra Kumar Mishra, India’s secretary of health. “We are digitising our communication all along our supply chain,” he said, right after announcing that India would spend an additional one billion dollars in the next five years to provide better reproductive health care to its population.

With the new announcement, India’s commitment now stands at an impressive sum of three billion dollars.

There are 100 million women in India who use contraceptives, according to government data. But not every one receives what she needs. This causes not just an imbalance in the demand and supply system, but also becomes a hurdle in achieving the overall SRHR goal of the government: providing contraceptives to an additional 48 million women and also reduce and eradicate diseases and deaths.

Digital tools can help bridge the gap between the demand and the supply, says Mishra.

Citing the example of E-mitra, a mobile phone based communication service launched by the government, Mishra says that the rapid expansion of digital network in India is sparking greater use of internet phones, especially in the urban and semi-urban belt. Health service providers should leverage this opportunity to reach out more people and provide them with credible information through mobile phones and internet tools, he feels.

Mishra’s words resonate with Kamla Mukhi, a 24-year-old young tribal woman community health campaigner in Daltongunj, a coal mining district in east India’s Jharkhand state. In Daltongunj, tribal women have to travel 20-25 kilometers to reach the nearest health center for their need – whether it is for information or a product.

A year ago, Mukhi visited one such health center. “An elderly woman health worker secretly slipped a box of condoms into a young woman’s hand. Later, the woman asked me, ‘Didi, how do I eat this? This is rubber.‘ I did not know whether to laugh or cry. The woman had earlier received cereals and birth control pills here, so she thought this new product was also for swallowing,“ Mukhi recalls.

With mobile phones, such situations would not occur because women can receive the information directly, without any added confusion, Mukhi says.“The health workers themselves feel embarrassed to talk of sex and contraceptives, but if that information is available on the mobile screen, nobody will have to be embarrassed.”

The digitized information system can also be a big boon for women and young people who live in conflict areas, says Mukhi, whose own village falls in an area partially controlled by Naxals, an ultra-communist rebel outfit fighting against the government.

“Women walk long miles to a health center. Then they find out it’s been closed because there was a security threat or an attack. If such information is shared on a mobile phone, they need not undergo such unnecessary hassles,“ says the young health activist.

But while it’s rather easy to share and give away information, collecting accurate statistics about how that knowledge is put to use remains a huge challenge.

“Credible data is a very crucial area,” says Melinda Gates, co-chair of the Bill & Melinda Gates Foundation, who in 2016 had announced an 80-million-dollar fund for research and collection of reliable gender specific data. Such data, feels Gates, is vital to identify the economic and social issues affecting women and fulfill the UN Sustainable Development Goals, especially goals 3 and 5.

“When a woman health center worker uses and shares data with the women in her community, she knows its valuable because its credible,“ Gates says.

Mishra agrees: “One of the technologies that we are using is Supply Chain Management, a software that will track the purchases and supply of all the reproductive healthcare commodities. We also have a current database on levels of contraceptive use which we are now going to digitize. Soon we will have an enormous volume of data and most of it we will make available to the public,” he says.

Currently, the government is partnering with the Gates Foundation in developing Kilkari, a mobile application that will provide customized information to new mothers, including notifying them on next vaccination dates. The government also has two other mobile apps – Emitra and Anmol – that are used to give free information on family planning.

None of the government’s technologies are specifically targeting youths, Mishra admits, but says that his department is planning to address it soon. Franklin Paul says that to encourage youths to use the technologies, they need to be ‘youth-friendly.‘

“The government apps are very text-heavy. But young people love something that is interactive and visually appealing and stimulating. This is why we are about to add videos to our Msathi apps. Just as we need to give them a basket of contraceptive products to choose from, we also need to give them a basket of technologies to pick. So, instead of just text messages, we should offer a bouquet of ecommerce, multimedia and social media that will help expand SRHR services among youths,“ says Paul.