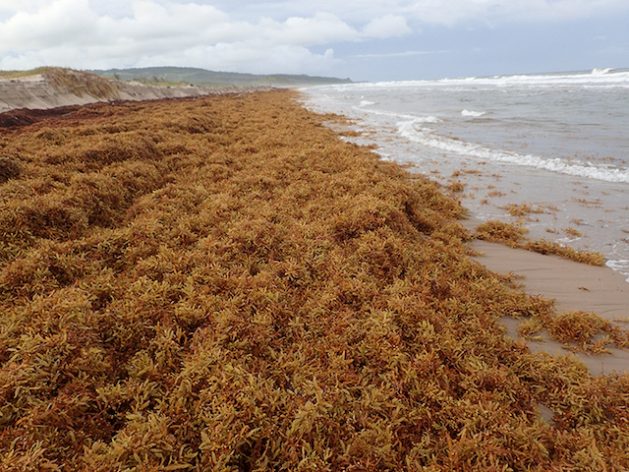 PORT OF SPAIN, Trinidad, Jul 25 2017 (IPS) - As Tobago’s tourism industry struggles to repel the sargassum invasions that have smothered its beaches with massive layers of seaweed as far as the eye can see – in some places half a metre thick – and left residents retching from the stench, the island’s government is working to establish an early warning system that will alert islanders to imminent invasions so they can take defensive action.

The Deputy Director of Trinidad and Tobago’s Institute of Marine Affairs (IMA), Dr. Rahanna Juman, told IPS, “After the 2015 sargassum event, the IMA got stakeholders together and developed a sargassum response plan. We looked at some sort of early warning mechanism [using satellites]. We know that it comes off of the South American mainland. If we know when it is coming and we can forecast which part of the coast it is going to land, we can inform the relevant regional authority so they can put things in place.

A particularly heart-rending consequence of the sargassum invasions has been the devastation it causes to turtle nesting sites on the island.

“We have this network set up. We got the Met Services to provide an idea of where [the sargassum] is going to land,” she said.

The 2010-2015 State of the Marine Environment (SOME) report, released in May this year by the IMA, states, “Sargassum invasion of Trinidad and Tobago’s beaches is a relatively novel phenomenon for which we have been largely unprepared for in the past. However, with climate change causing continuous warming of the oceans, it appears that future events are likely.”

The country experienced massive onslaughts of sargassum, a type of seaweed, in 2011, 2012, 2013, and 2015, and some again this year. “Sargassum is a natural phenomenon,” said Dr. Juman, but it was the quantity of the seaweed that stunned the public during these years.

The consequences for Tobago’s tourism industry have been debilitating.

A director on the board of the Tobago Hotel and Tourism Association, Environment Tobago and the Association of Tobago Dive Operators, Wendy Austin, told IPS the first major event for the Tobago tourism industry was in 2015. “People were cancelling their bookings. Visitors were having to move, particularly from the north end of the island. Speyside had it very bad and the smell was awful. The restaurants had to close because people were not coming out to eat.” As the sargassum rotted, it emitted a nauseating stench.

“This year we have been hit fairly hard once again,” Austin added. “Recommendations have been put forward to the Tobago House of Assembly (THA) as to how the situation can be handled environmentally so that tourism would then have fewer problems. However, there is no money to put these recommendations into action.”

The THA reportedly spent approximately 500,000 dollars during one year to clear up the decaying sargassum.

Apart from the tourism industry taking a hit, the country’s marine environment has also been adversely affected .

A particularly heart-rending consequence of the sargassum invasions has been the devastation it causes to turtle nesting sites on the island. The SOME report notes, “Ecologically, both adult and juvenile sea turtles can become entangled in the thick masses.”

Dr. Juman said hatchlings making their way out to sea from Tobago’s shores in 2015 got caught in the mass of sargassum, as well as many leaving the beaches of Trinidad in the northeast after they were hatched. Local media reports earlier this year expressed fears that turtle hatchlings would die because of becoming entangled in the masses of sargassum that washed ashore in April.

Further, “sargassum can smother your coral reef and seagrass, and they can bring in organisms that are not native to [Tobago], so that can have a negative impact on the native species,” said Dr. Juman, who is a wetlands ecologist.

The SOME report notes that the seagrasses which the sargassum destroyed off southwest Tobago are important for the marine environment since they “stabilize bottom sediments, slow current flow, prevent erosion, and filter suspended nutrients and solids from coastal waters.”

In response to this phenomenon, as well as other threats caused by climate change to the nation’s coastlines, the Trinidad and Tobago government has established as a priority of its new Integrated Coastal Zone Management (ICZM) policy the objective of maintaining “the diversity, health and productivity of coastal and marine processes and ecosystems”.

Deputy Permanent Secretary in the Ministry of Planning Marie Hinds said via e-mail that this objective, the eighth one listed under the ICZM policy, incorporates tackling the sargassum problem.

She said achieving the objective would involve implementing a “programme to manage/control the introduction of alien invasive species into the coastal and marine zones.”

Establishment of an ICZM policy was a requirement of the Inter-American Development Bank for Trinidad and Tobago to access funding to deal with climate change, Hinds added. The ICZM policy will facilitate coordination and cooperation between civil society, government and the private sector in addressing the impacts of climate change.

However, there is still relatively little research data on which to base decision-making and management of the sargassum problem because it is such a new phenomenon, said Dr. Juman.

Among the proposals for disposing of the sargassum is to transform it into a biogas. But, “if you are going to invest in some sort of industry…you have to have a known quantity, you need to know how much, you need to have a consistent supply.

“You also need research to quantify such an industry’s impact on the fishing and shipping industry, as well as tourism. We do not have that kind of data,” said Dr. Juman. “Having the research and knowing how to treat with it so we can be proactive not reactive,” she said, was important for the IMA in finding solutions to the sargassum problem.