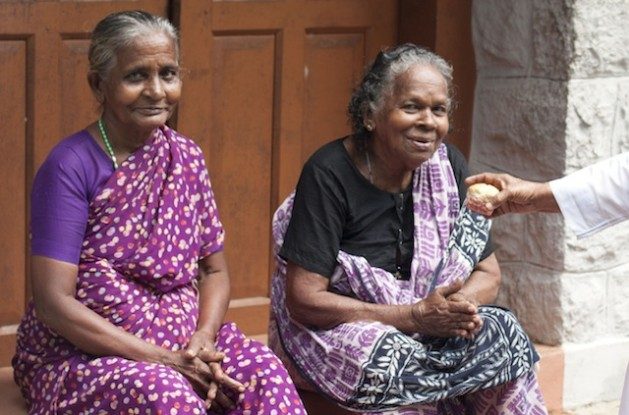 NEW YORK, Aug 15 2017 (IPS) - While rapid population growth may be the defining feature of the 20th century, with world population nearly quadrupling from 1.6 to 6.1 billion, the hallmark of the 21st century is likely to be population aging.

The consequences of the population aging are reverberating across the globe. The evolving transitions to older populations are challenging the existing world order and impacting virtually every aspect of society, including economic activity, investments, politics, taxation, education, housing, household/family structure, retirement and healthcare services.

Throughout much of human history population age structures were comparatively young. In the past century, for example, the percent elderly, those aged 65 years and older, averaged around five percent. In striking contrast, the proportion elderly will more than triple during the 21st century, reaching close to one-quarter of the world’s population (Figure 1). 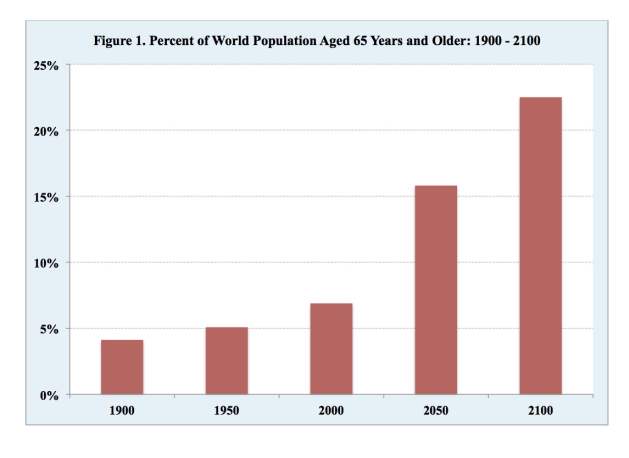 Although substantial differences in national age structures are evident today, countries are heading to the same irreversible destination:  significantly older populations. For example, the G20 countries, which together represent more than 60 percent of world population, are well along in the process of momentous aging transformations of the 21st century. 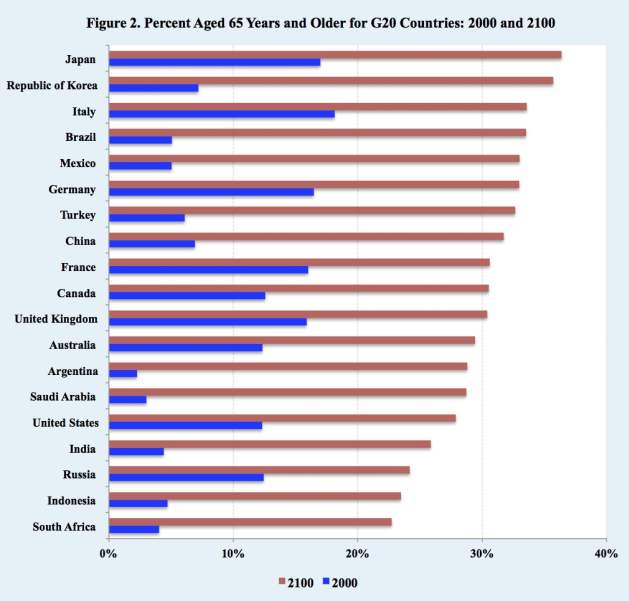 As women make up the majority of the elderly in nearly all countries, population aging will affect women more than men. For example, in countries such as Japan, Portugal, Singapore and South Korea, the proportion of the female population aged 65 years and older is expected to reach 40 percent during the 21st century. Given that women typically survive their partners, many elderly women will need care and assistance, especially the growing numbers living alone.

Another clear indicator of the unprecedented population aging underway worldwide is the Historic Reversal, or the demographic turning point when children (0 to 14 years) in a population become fewer than its elderly (65 years and older). The Historic Reversal first occurred in 1995 in Italy.

Today some 30 countries have experienced the Historic Reversal, including Canada, France, Germany, Greece, Japan, Spain and the United Kingdom.  In 2075, and for the first time in human history, the world’s population will go through the Historic Reversal with the elderly increasingly outnumbering children (Figure 3). 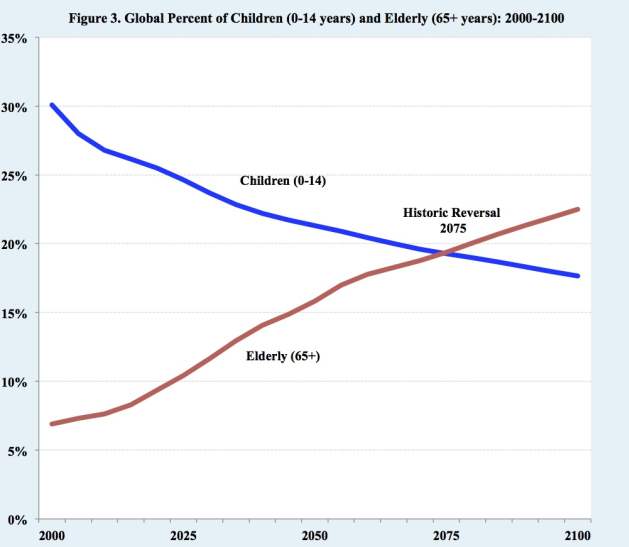 Lower mortality rates and living longer increase the numbers of elderly. But the primary driver of population aging is fertility. Low fertility results in age structures having relatively fewer children, a growing concern of many governments, and comparatively more elderly. In addition, the faster the decline from high to low fertility levels, such as has taken place in China, the more rapid the transition to older population age structures.

Fertility rates below the replacement level of about two births per woman also mean declining populations for many countries, especially those with limited immigration. Today more than 80 countries, accounting for nearly half of the world’s population, have fertility levels below replacement, including China, United States, Brazil, Russia, Japan, Viet Nam, Germany, Iran, Thailand and the United Kingdom.

The combination of declining birth rates, increased longevity and growing proportions of elderly are raising serious economic questions and fiscal concerns within many countries. In particular, population aging is resulting in growing financial stresses on government-sponsored retirement, pension and healthcare programs that are challenging the sustainability of those programs.

When Germany’s Chancellor Otto von Bismarck in 1889 and U.S. President Franklin D. Roosevelt in 1935 established their respective pay-as-you-go retirement programs, their countries had in excess of ten people in the working ages per elderly person. Today those ratios have declined to less than a handful of people in the working ages per older person. In short, fewer workers are supporting more retirees.

Governments with extensive social programs for the elderly, such as income support, healthcare services and social benefits, are experiencing escalating costs as the numbers of elderly grow rapidly and the duration of support lengthens. Loathe to raising taxes, governmental attempts to address the escalating costs of those programs have by and large focused on adjustments in retirement ages, benefits, contribution rates and savings plans.

Those adjustments alone, however, are likely to be insufficient to cover the rising costs. Shortfalls in many programs for the elderly will need to be financed by general tax revenue. This in turn may negatively impact economic growth and overall societal wellbeing if governments divert their current spending from education, infrastructure investments and social welfare to programs for the elderly.

As consumption varies over the human life cycle, population aging is also bringing about noteworthy changes in the demand for goods and services. The prevalence and overall costs for health services and care giving, for example, can be expected to increase as populations become older.

Housing and household structures are also being affected by population aging.  In the past and continuing in some developing countries, elderly persons generally lived with adult children and grandchildren. With rising levels of urbanization, increasingly neither the elderly nor their adult children are choosing to live together, but prefer separate households with proximity.

Population aging is certainly a significant human achievement, the result of smaller family sizes, lower mortality rates and increased longevity. However, this notable achievement comes with both challenges and opportunities for governments, businesses, organizations and private citizens. Those able to recognize and adjust to the 21st century’s demographic transformation are far more likely to benefit and prosper than those who ignore or dismiss the momentous consequences of population aging