NEW YORK, Nov 17 2015 (IPS) - Concerned with the consequences of demographic decline and population ageing, especially with respect to economic growth, national defence and pensions and health care for the elderly, a growing number of governments are seeking to raise birth rates. Whereas nearly 40 years ago 13 countries had policies to raise fertility, today the number has increased four-fold to 56, representing more than one-third of the world’s population.

The most recent and largest addition to this pronatalist group of countries, which includes Australia, France, Germany, Iran, Israel, Italy, Japan, Russia, South Korea, Spain and Turkey, is China. The Chinese government announced that it will change its controversial one-child policy to a two-child policy per couple in order to balance population development and address the challenge of an ageing population. 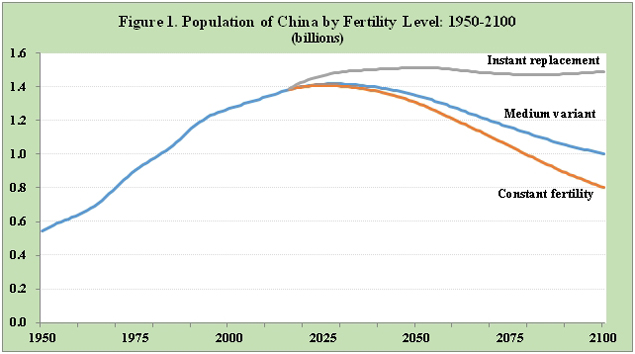 China’s population age structure is also becoming older than any time in the past. Whereas in 1950 less than five per cent of the Chinese were aged 65 years or older, today the proportion has doubled to 10 per cent. By 2035 China’s proportion elderly is expected to double again and reach one-third by around midcentury.

Similar to China, 82 other countries – accounting for almost half of the world’s population – are experiencing fertility rates below the replacement level of about two births per woman. As a result, the populations of 48 of those countries, including Germany, Japan, Russia and South Korea, are projected to be smaller and older by midcentury, even assuming modest gains in birth rates. If fertility rates were to remain constant at their current levels, the declines and ageing would be even more pronounced than currently expected (Figure 2). 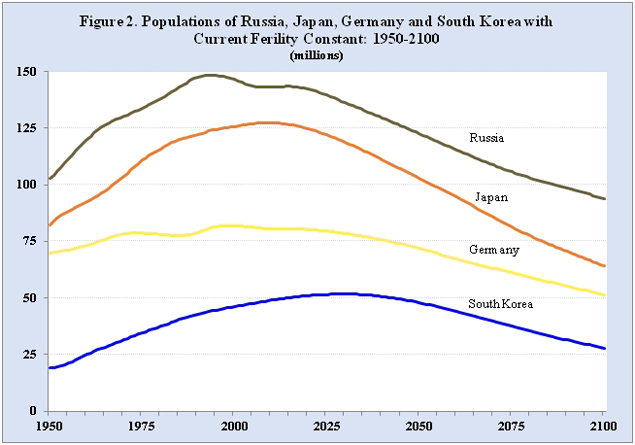 In an attempt to counter those two major demographic trends, many governments have adopted a variety of policies to raise birth rates. At one extreme are draconian measures such as prohibiting contraception, sterilization, abortion and the education and employment of women. As those measures violate basic human rights, few governments are prepared to take such drastic steps to raise fertility. Moreover, such measures have undesirable demographic consequences, including higher levels of unintended pregnancy, illegal abortion and maternal mortality.

Some governments are promoting marriage, childbearing and parenting through public relations campaigns, incentives and preferences. Such programs highlight the vital role of motherhood and its valuable contribution to the welfare and growth of the country. Australia and South Korea, for example, are among those making appeals to women to have one more child. Also, Iran is considering legislation that would encourage businesses to prioritize the hiring of men with children.

Perhaps the most common pronatalist policies aim to reduce parent’s considerable financial costs for childbearing and child rearing. Those policies include cash bonuses at the time of a child’s birth and/or recurrent cash supplements for dependent children

Additional policies, especially popular among many Western countries, focus on making employment and family responsibilities “compatible” for working couples, especially mothers. In addition to extended maternity leave as well as paternity leave, other measures include part-time work, flexible working hours, working at home and family-friendly workplaces, including nurseries, as well as pre-school and after-school care facilities.

However, the costs of family friendly policies are not insignificant. For example, with fertility at two children per woman, France’s extensive scheme of family benefits is estimated to cost four per cent of gross domestic product, one of the highest percentages in the European Union.

Some governments are also looking to selective immigration to maintain the size of their workforce and slow down the pace of population ageing. However, a recent United Nations study concluded that international migration at current levels would be unable to compensate fully for the expected population decline. Between 2015 and 2050, the excess of deaths over births in Europe is projected to be 63 million, whereas the net number of international migrants to Europe is projected at 31 million, implying an overall shrinking of Europe’s population by about 32 million.

In addition, the financial costs, social integration and cultural impact of immigration have come to the political forefront in recent months. A growing tide of refugees and economic migrants – mainly from Syria, Afghanistan, Eritrea, Iraq, Nigeria and Pakistan, estimated at over 800,000 – have arrived on the shores of the European Union since the beginning of 2015 to escape war, repression, discrimination and unemployment.

As part of its response, the EU is considering a plan to offer aid money and visas to African countries that agree to take back thousands of their citizens who are unlawfully residing within its borders. Also aiming to stem the record inflows of refugees, various EU members have put up fences, imposed border controls and tightened asylum rules.

Other countries that are averse to encouraging immigration, such as Japan and South Korea, have instead opted to boost labour productivity as a means of compensating for a shrinking labour force. Those governments are also reviewing legislation to encourage more women to join and remain in the labour force by offering them family friendly work environments, improved career mobility and promotions to management and senior positions.

While family-oriented measures may encourage some women to have children, those policies are costly and their overall effect on fertility is weak or unclear. The many forces pushing fertility to low levels are simply too powerful for governments to overcome with dictates, financial incentives and public relations campaigns.