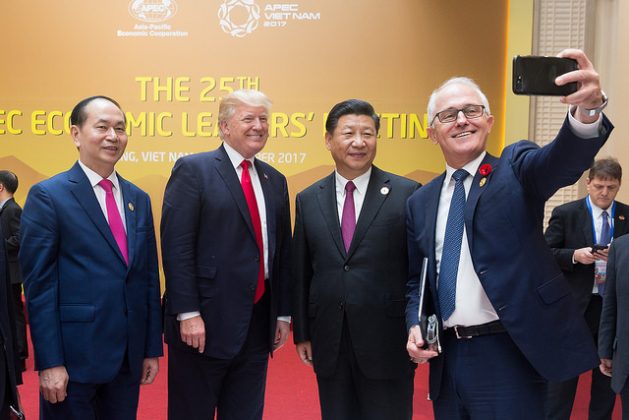 U.S. President Donald Trump with Chinese President Xi Jinping during Trump’s visit to Asia. As the US pulls out of the Paris Climate Agreement, China has shown huge growth in clean energy and its emissions appear to have peaked more than a decade ahead of its Paris Agreement NDC commitment. Credit: Public Domain

SAN FRANCISCO, California, Nov 12 2017 (IPS) - As negotiators meet in Bonn to put together a deal to implement the Paris Agreement, John Holdren, a professor of environmental policy at the John F. Kennedy School of Government, Harvard University, stressed that economic development and climate change mitigation and adaptation are not ‘either-or’ but must be pursued together.

Addressing science journalists a week before the Bonn climate talks, Professor Holdren said among climate change skeptics, “wafflers’ are the most dangerous, because their arguments to postpone aggressive climate action now in favor of economic progress has the potential to increasingly influence debate and government policy.”

According to Professor Holdren, the wafflers claim to favor research and development on better technologies so emissions reductions can be made more cheaply in the future, and further argue for accelerating economic progress in developing countries as the best way to reduce their vulnerability as well as counting on adaptation as needed.

However, it is ironic, he says, that the current US administration “with climate deniers and wafflers occupying top positions” are cutting support for the same approaches they propose.

Apart from drastic domestic spending cuts to climate related programmes, President Trump earlier this year decided to pull the US out of the Paris Agreement—a move that has left the global community wondering what’s next.

Despite its negligent contribution to global emissions, Africa is one of the most vulnerable regions to climate change—already suffering droughts, floods, affecting the predominantly rain-fed agricultural productivity and production. And Professor Holdren’s address titled: Why the Wafflers are Wrong—Addressing Climate Change is Urgent—and a Bargain delivered to the 10th World Conference of Science Journalists (WCSJ2017) in San Francisco, California, held 26-30th October 2017, is music to the ears of the African Group of Negotiators (AGN) who have been pushing urgent climate action at the UNFCCC negotiating table.

According to Professor Seth Osafo of AGN, “The slow progress by developed country parties towards reaching the US$100 billion goal of joint annual mobilization by 2020 is not in Africa’s interest.”

And in the words of Emphraim Mwepya Shitima, Chief Environmental and Natural Resources Officer at Zambia’s Ministry of Lands and Natural Resources, the developing country community needs financial resources now more than ever. “We are at a critical stage where we need all the financial resources we can get to effectively implement our NDC which is off course now in sync with the recently launched Seventh National Development Plan running up to 2021,” he told delegates at a COP23 preparatory meeting.

With the US pullout meaning the loss of a major financial contributor, there are fears that the resource mobilization process might even get slower. Mithika Mwenda, Secretary General of the Pan African Climate Justice Alliance (PACJA), a consortium of African civil society organisations, is also concerned and is pushing for industrialised countries to set more ambitious goals in terms of their emission cuts.

“Coming from the region that suffers the most due to climate change, we have watched with utter dismay President Trump’s continued efforts at dismantling the former President’s Barrack Obama’s climate legacy, and wish to reiterate that this is the time to classify the global community into two: those for the people and planet, and those for Trump and profit,” says Mwenda.

He questioned the presence of the official US delegation, saying it may be a bad influence on other states that are already reluctant to take serious action on climate change. “The US withdraws from the Paris Agreement, yet they still want to show that they can negotiate the implementation framework,” complained Mwenda, “That’s why we are calling in delegates here to sign our petition to kick Trump and his government out of these negotiations…”

Scientifically, climate change is a serious complex issue—it requires well-developed research systems especially on how it impacts different sectors of development, or at least in the spirit of the WCSJ2017 theme, to bridge science and societies. Unfortunately, as compared to the developed world, Africa’s scientific research and development still lags behind such that most often than not, it relies on the developed world for data, a concern that South Africa’s Minister of Science and Technology, Naledi Pandor raised during a session on Who will do Science at the WCSJ2017.

Pandor believes private companies which drive scientific innovations in the developed world must stop seeing the developing world just as a mass clientele—where research and development is done just for corporate interests and not for the benefit of the people.

“A number of private companies only have commercial relationships but do not have innovation relationships with the developing world; so the nature of partnerships between my continent Africa and other parts of the developing world must change,” she said. “If we are to do science in the 21st century…the way we perceive Africa and scientists in Africa has to fundamentally alter.”

She further lamented the sidelining of women in science whom she said are doing a lot of tremendous work, and her plea is for Africa to embrace and give space to women scientists amidst the challenge of climate change in a continent that contributes less than 4 percent to global emissions. “The next generation of scientists must be women—and black people have to be a part of that.”

The High Cost of Inaction

Agreing that research and development are important steps in tackling climate change, Professor Holdren, who is former Assistant to President Obama for Science & Technology, argues that even if implemented, the wafflers’ favoured economic approaches would be grossly inadequate because while clean energy is essential to provide options for the next stage of deep emissions reductions, the global community needs to be reducing now with the available technologies.

He says climate change is already causing serious harm around the world with increases in floods, drought, wildfires, heat waves, coral bleaching, among others, all of which are “plausibly linked to climate change by theory, models, and observed ‘fingerprints’; most growing faster than projected”.

The global community has three options: mitigation, adaptation – or suffering. Therefore, minimizing the amount of suffering in the mix can only be achieved by doing a lot of mitigation and a lot of adaptation.

In arguing for adaptation specifically, Professor Holdren believes that many adaptation measures would make economic sense even if the climate were not changing because there have always been heat waves, floods, droughts, wildfires, powerful storms, crop pests, and outbreaks of vector-born disease, and society has always suffered from being underprepared.

“The idea that society cannot afford to address climate change is wildly wrong,” he said, calling for urgent climate action now and not later

COP22 produced the Marrakech Partnership for Global Climate Action which called for all to go further and faster in delivering climate action before 2020. The global community now eagerly awaits COP23 Bonn declaration.