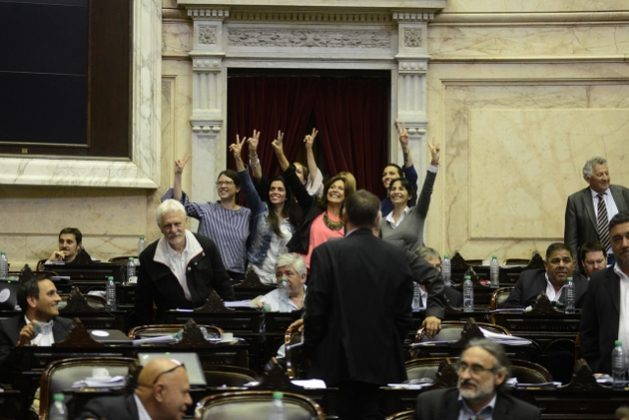 A group of women legislators in Argentina’s lower house, who in the early hours of the morning led a surprise vote that resulted in the approval of the law on gender parity in Argentina’s political representation, celebrate their achievement at the end of the historic session. Credit: Chamber of Deputies of Argentina

BUENOS AIRES, Dec 1 2017 (IPS) - It was an unexpected move by a group of women in the lower house of the Argentine Congress. At one o’clock in the morning, during a long parliamentary session, they demanded the approval of a stalled bill for gender parity in political representation. There was resistance and arguments, but an hour later, the initiative became law by a large majority.

With votes from all the parties, a historic step was taken for Argentine politics: as of the next legislative elections, in 2019, all the lists of candidates for Congress must necessarily alternate male and female candidates, to ensure equal participation in both houses.

The law also stipulates that women have to make up half of the lists of candidates for national positions of the political parties, although in this case it does not require an alternation of women and men.

"This is the result of many years of efforts for politics to incorporate the voice and presence of women when it comes to making decisions that impact society as a whole." -- Deputy Victoria Donda

The surprise move in the early hours of the morning on Nov. 23 by female lawmakers revived a stalled bill that was already approved by the Senate 13 months ago, and by a committee in October, but was not scheduled for debate in the lower house this year.

When the session finally ended at almost four o’clock in the morning, the speaker of the lower house, Emilio Monzó of the ruling Cambiemos alliance, asked the euphoric women legislators who had taken part in the mission to take a group photo. And many others joined the picture to demonstrate their support.

“It was an intelligent strategy that cut across party affiliation to revive an issue that kept being put off. Once there was agreement to vote, almost everyone did so in favour of the measure. With what arguments could a lawmaker publicly justify voting against it?” asked Natalia Gherardi, executive director of the Latin American Team for Justice and Gender (ELA).

ELA is one of the many civil society organisations that have been demanding the approval of a gender parity law for more than 10 years, a period of time in which dozens of bills were presented.

Gherardi told IPS that this law “represents a new paradigm of parity democracy, which should not be limited to the legislative branch. Politics must reflect the diversity of society.”

Another stride forward in Latin America

In Latin America, Ecuador has been a path-breaker, after giving constitutional status to gender parity in elective posts in 2008.

Legislators who supported the new law at four o’clock in the morning on Nov. 23, 2017 took a group photo when the historic session in Argentina’s Chamber of Deputies ended, after passing a law that imposes gender parity in political representation. Credit: Chamber of Deputies of Argentina

A report on parity democracy in the region, by the Inter-American Commission of Women (CIM), within the Organisation of American States (OAS), concluded that the region is the most advanced in the world with respect to laws that protect women’s political participation.

Argentina is the fifth country to regulate parity in parliamentary representation, after Ecuador, Bolivia, Costa Rica, Nicaragua and Mexico.

But in total there are 15 countries in Latin America that have legislated on gender parity or have established quotas ranging from 20 to 50 per cent in elective posts.

However, these laws have not always been applied effectively, according to a document from the project “Atenea: Mechanism for the Acceleration of the Political Participation of Women in Latin America and the Caribbean” developed by the United Nations Development Programme (UNDP), UN Women and International Idea, aimed at promoting political parity in Latin America.

Argentina is a pioneer in the region, having passed the first female quota law, in 1991, which set a mandatory floor of 30 percent of women on the lists of candidates, “in proportions likely to lead to election.”

However, the report ”Political Parity in Argentina. Advances and Challenges “, presented this year by the Atenea project points out that, although the quota law favoured women’s access to politics, over the years the set quota of 30 percent became “a difficult ceiling to break through.”

Alejandra García, a gender associate at UNDP Argentina, told IPS that women’s political representation in the country “had been stagnant. That is why this new legislative step forward is very positive.”

García maintains that the quota laws “are affirmative action laws and have a temporary nature, while this new law is conceptually different, since it seeks to guarantee parity representation in a definitive way “.

The issue of gender parity in parliaments entered Argentine politics at the beginning of this century, when the regional legislatures of three of the country’s 23 provinces passed gender parity laws: Santiago del Estero, Córdoba and Río Negro.

The matter was revived last year, when four other provinces passed laws (Buenos Aires, Chubut, Salta and Neuquén), while at the national level the Senate approved the bill on gender parity.

It was on Oct. 19, 2016 when the issue of political parity had major repercussions, coinciding with massive marches of women throughout the country against sexist violence, under the slogan “Not one [woman] less”, in response to several femicides or gender-based murders.

However, at the same time, the lower house was discussing an electoral reform bill promoted by the government of President Mauricio Macri, which among other issues included changing the voting system from paper ballot to electronic, but did not include any changes regarding gender issues.

The parity bill now is only waiting to be signed into law by the executive branch, which is taken for granted after it was approved with 57 votes in favour and only two against in the Senate, and 165 positive votes, four negative and two abstentions in the Chamber of Deputies.

“This is the result of many years of efforts for politics to incorporate the voice and presence of women when it comes to making decisions that impact society as a whole,” said Deputy Victoria Donda.

This member of the progressive Free of the South Movement was the one who interrupted the programmed course of the session on the night of Nov. 22, to demand a vote on the gender parity bill, without the need for debate or speeches, which generated a discussion but was quickly accepted.

“The overwhelming vote in favour reflected the progress of the demands for equal rights,” added 40-year-old Donda, who is somewhat of a symbol of Argentine democracy.

This is because she is the daughter of disappeared parents, and was born in the Navy Mechanics School (ESMA), the most infamous of the torture centres run by Argentina’s 1976-1983 military dictatorship.

Donda was stolen at birth by the family of a member of the security forces and regained her true identity in 2003.

Still pending in Argentina with respect to gender parity in politics are the executive and judicial branches.

In 2016, there were just 13.6 percent women in ministerial positions, according to data from Atenea.
At the level of municipal governments, there is only official data from the eastern province of Buenos Aires, the largest and most populous, where only 2.9 percent of mayors are women.

The proportion rises to 31.7 percent in city councils, where the 30 percent quota established by national legislation is applied.