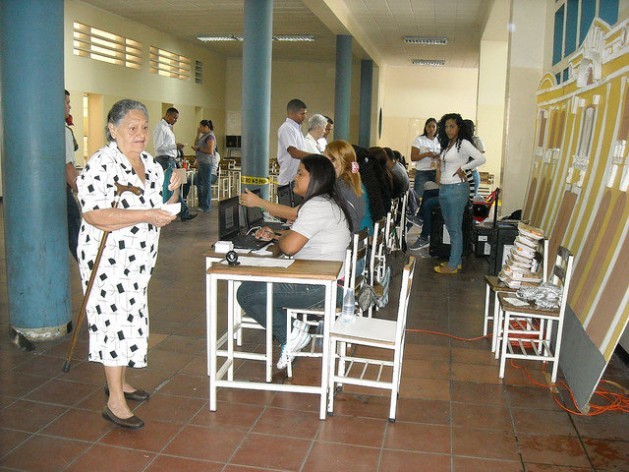 A Venezuelan woman gets ready to cast her ballot at a voting station in Caracas mainly made up of women in the last presidential elections, on Apr. 14, 2013. Credit: Raúl Límaco/IPS

CARACAS, Jul 9 2015 (IPS) - More women could be elected to the Venezuelan legislature, but the new rule on gender parity for the upcoming parliamentary elections has been caught up in the political polarisation that has had this country in its grip for years.

“This rule was long in coming, and is the product of decades of struggle and sacrifice by hundreds of women,” Tibisay Lucena, the president of the National Electoral Council (CNE), said at the presentation of the new regulation on gender parity. “We are moving towards the construction of a better democracy,” she added.

The single-chamber National Assembly for the 2016-2020 period will be elected on Dec. 6, after years of severe political polarisation fuelled, since Nicolás Maduro became president in 2013, by falling oil prices, devaluation, inflation and shortages of basic goods.

The new gender parity regulation adopted by the CNE was quickly caught up in the clash, although women from both sides of the political spectrum celebrated the fact that Venezuela had joined the “club” of Latin American nations with gender quotas in parliamentary elections.

“Women’s rights are already a matter of state in Venezuela, thanks to our struggles and to the comprehension of (late) President Hugo Chávez (1999-2013), the driving force behind the 1999 constitution,” a member of the Latin American Parliament, Marelis Pérez Marcano of the governing United Socialist Party of Venezuela (PSUV), told IPS.

This oil-producing nation first adopted a gender quota – reserving at least 30 percent of candidacies for women – in the 1997 parliamentary elections. But the rule was revoked by the 2000 electoral law and replaced by CNE calls for gender parity.

As a result, the current 165-seat legislature consists of 137 men and 28 women (17 percent) – a proportion that puts Venezuela in 18th place in Latin America and the Caribbean, according to the Inter-Parliamentary Union (IPU).

In top place in this region is Bolivia, where women comprise 53 percent of the lower house of parliament and 47 percent of the upper house. At least 10 other Latin American countries have gender quotas for parliamentary elections. And one of them, Argentina, was the first country in the world to adopt such a law. Colombia also has a 30 percent quota for high-level public posts.

Venezuela’s new rule stipulates that political parties must present an equal number of male and female candidates and must alternate them on their lists, both for members of parliament and alternates.

When a precise 50/50 parity is impossible in one of the 24 electoral regions, then at least 40 percent of the candidates must be women.

Elsa Solórzano of the Democratic Unity Roundtable (MUD), a catch-all coalition of 27 opposition groups and parties, complained about the timing of the new regulation and argued that it violated several constitutional clauses.

She said the regulation, officially implemented on Jun. 29, came a month after the MUD held primary elections supervised by the CNE itself. The coalition is now holding debates on how to rearrange the lists of candidates.

Furthermore, she noted, Article 298 of the constitution establishes that the electoral law “cannot be modified in any way” in the six months prior to elections. 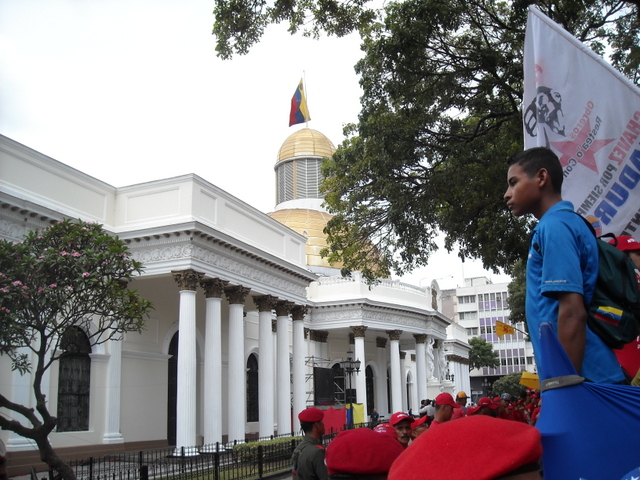 Supporters of the governing United Socialist Party of Venezuela outside of the legislature in Caracas. Credit: Courtesy of Raúl Límaco

“The trick was the political maneuvering, not the substance of the rule: parity. And it’s obvious that it was the doing of the CNE, not of we women who were ignored when we demanded in a timely fashion the right to be elected,” activist Evangelina García Prince, minister of women’s affairs in the 1990s and a member of the Venezuelan Observatory of the Human Rights of Women, told IPS.

Virginia Olivo, president of the non-governmental Observatory, said that in this country there is “a low level of political representation for women, with a parliament that is below the regional and global averages.”

Statistics provided by the IPU indicate that women represent 24.5 percent of lawmakers in Latin America and 20 percent globally.

According to the 2011 census, 39 percent of the seven million mothers in this country of 30 million people are heads of households. And of the mothers who are on their own, 10 percent are adolescents.

Olivo pointed out that, although no precise statistics are available, most of the nine million people living in poverty in Venezuela live in these female-headed households. As another illustration of the inequality faced by women, she noted that women earn 82 percent of what men earn for the same work.

Defending the new gender quota, Lucena said that since February she has been talking with female opposition leaders about the gender parity rule that was being drawn up.

But “these individual conversations don’t mean the MUD was formally informed,” said Vicente Bello, one of the coalition’s electoral affairs officials.

But another opposition leader, Isabel Carmona, president of the Democratic Action party, which governed the country several times in the 20th century, supported the regulation, arguing that “the rights protected by the justice system are not subject to political bargaining.”

“This measure affects the cultural roots of power, because culture in Latin America has made machismo a symbol of power. We are starting to dismantle that, because no one who has a privilege has the generosity to give it up,” Carmona said.

Margarita López Maya, a historian and political scientist, said “the unexpected decision to require gender parity for the candidates in the 2015 parliamentary elections reveals, once again, the governing party’s interest in generating an atmosphere of uncertainty and uneasiness to disrupt the important elections that will take place on Dec. 6.”

Her warning is based on the fact that the five members of the CNE – four of whom are women – are pro-government, and only one, the only man, is considered a supporter of the opposition. The rule was approved with the votes of the four female members.

Leaders from across the political spectrum say that if the opposition, which for now is ahead in the polls according to the main polling companies, wins a majority in the legislature, it would launch a transition process that could push the PSUV and President Maduro, Chávez’s political heir, out of power.

But, said Lucena, the electoral authority’s new rule “refers to the candidates that the political parties will offer, but it will clearly be the voters who will decide, with their votes.”

During much of Chávez’s time in office, women headed up the rest of the branches of government: the legislature, the judiciary, the electoral authority, the attorney general’s office, the comptroller-general’s office and the ombudsperson’s office.

Women are also a majority in the judiciary and have been cabinet ministers since 1967. In 1979 the country had its first women’s affairs minister, and in 2013 a woman admiral was defence minister.