Female, journalist and caught in a crossfire?

OSLO, Dec 4 2017 (IPS) - Hopefully female journalists have read it by now “What if…? Safety Handbook for Women Journalists”. The handbook, written by renowned safety trainer Abeer Saady, an Egyptian, and published by The International Association for Women in Radio and Televison (IAWRT), provides hands on tips on what to do when caught in a crossfire , when stopped at checkpoints, arrested during coverage, or kidnapped and held hostage. 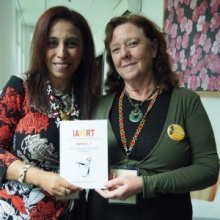 Security and safety for journalists, especially females, is often not taught in schools and rarely discussed in newsrooms. Still, a global survey of security risks for women journalists revealed that the majority preferred not to report on gender-based violence for fear of harassment, losing their job or being stigmatized.

More male journalists are killed every year than women, but female journalists are increasingly entering the field of high risk journalism and covering conflicts. In the Philippines twelve women journalists were killed in the line of duty since the restoration of democratic institutions in 1986, four them in the Ampatuan massacre in 2009. None of the perpetrators were brought to justice.

The handbook compiles experiences, not only Saady’s as a journalist with 27 years of experience, but also of other women journalists who have faced different and difficult situations.

Saady underscores the importance of physical, psychosocial and digital safety and security, and points out risk assessment, profile management, situational and digital awareness and a safety plan as crucial tools.

Many of the tips shared in the handbook are practical enough for any journalist or newsroom to follow.

Psychosocial security is something that’s not always attended to. What to do if you as a journalist lose sleep after covering war or violence? The handbook also suggests ways of dealing with trauma.

The handbook provides tips in dealing with online harassment, such as naming and shaming the online harasser and moderating the comments section as well aspreventing people from remaining anonymous, among others.

A Norwegian journalist, interviewed in the book, became a victim of online harassment. She believes that a better solution would be to develop what she calls harassment competence, such as distinguishing between ‘the angry’, ‘the crazy’, and ‘the dangerous’ bullies.

– The ‘angry’ are people you can respond to, and perhaps even make them understand that you’re a person who might get hurt by their utterances. Harassment coming from ‘the crazy’ and ‘the dangerous’ had better be ignored…since a reply often makes the bullying even worse, she says.

In social media women journalists should take precaution in protecting their digital safety and security. Social media accounts and emails can be hacked. The handbook lists tips on how to carry out a digital clean up.

The handbook has a separate section on ethical safety decisions. The main point is to do no harm.

Another section is devoted to legal safety. Knowing one’s rights as a journalist and the libel and other media laws in one’s country is helpful.

The handbook, which can be downloaded from the IAWRT’s website, is a must-read for every female journalist. The aim is to help creating an environment where women journalists can perform their job without fear or danger.