Mengpin Ge is a Research Analyst and Kelly Levin, a Senior Associate at World Resources Institute 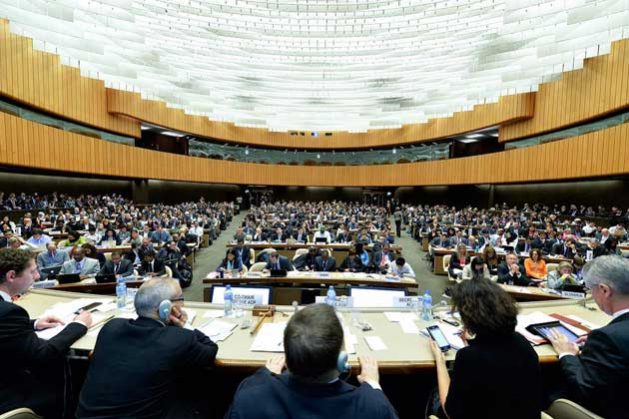 WASHINGTON DC, Apr 23 2018 (IPS) - In the lead up to the historic Paris Agreement on climate change, adopted in 2015, more than 160 countries and the European Union submitted their own plans to address climate change, known as Intended Nationally Determined Contributions (INDCs).

According to the global climate pact, a country’s INDC is converted to a Nationally Determined Contribution (NDC) when it formally joins the Paris Agreement by submitting an instrument of ratification, acceptance, approval or accession, unless a country decides otherwise.

Even if current commitments are fully implemented, warming is on track to reach 2.7°C to 3.7°C over the course of the century, setting the world on course for dangerous sea level rise, intensified extreme events and other impacts.

Fortunately, several features in the Paris Agreement can help strengthen national commitments over time. For example, Parties to the Paris Agreement must communicate or update their NDCs by 2020 and continue to do so every five years thereafter to enhance ambition.

Some countries aren’t waiting until 2020 to make changes to their national climate commitments. As countries ratify the Paris Agreement, some have decided to revise their INDCs and communicate the changes as part of their first NDCs.

So far, of the 169 countries that have communicated an NDC, 15 offered a plan that differs from their INDC: Argentina, Benin, The Bahamas, Belize, Canada, France1, Indonesia, Sri Lanka, Morocco, Mali, Nepal, New Zealand, Pakistan2, Uruguay and Venezuela.

In addition, three countries that have joined the Paris Agreement requested that their INDCs not be converted to NDCs upon ratification: Brunei Darussalam, Ecuador and the Philippines.

What does this mean for global climate action? Encouragingly, many of the revisions go beyond countries’ previous submissions, shifting to more stringent targets, increasing transparency, and reflecting recent developments in knowledge and technology.

Some countries, however, have lowered their ambition or made tweaks that make their commitment less clear. Here are some of the changes countries have made when converting INDCs to NDCs.

• Argentina changed its GHG target type to a fixed-level target in its NDC, specifying that it will not exceed net emissions of 483 MtCO2e by 2030, with conditional measures that could bring emissions further down to 369 MtCO2eq for 2030. The switch of target type presents a strengthened target by removing the uncertainties associated with baseline projections needed for the previous INDC target. Although mostly the result of an improved GHG inventory methodology, the NDC target also results in a lower level of emissions in 2030 when compared to the 569.5 MtCO2e implied by the INDC target (a 15 percent reduction below business-as-usual levels of 670 MtCO2e).

• Indonesia, while sticking to the same target of reducing emissions 29 percent unconditionally (up to 41 percent conditionally) from business-as-usual levels, revised its baseline emissions level from 2,881 MtCO2e in the INDC to 2,869 MtCO2e in NDC. Thus, its GHG target now translates to a lower level of absolute emissions in the target year.

• Morocco now presents a detailed portfolio of 55 unconditional and conditional mitigation actions, along with cost estimates and emissions-reduction potential for 2030. Examples with the highest emissions-reduction potential include: putting in place multiple wind farms, thermodynamic concentrated solar power and photovoltaic power plants in multiple areas by 2020; importing liquefied petroleum gas (LPG) and use of LPG for electricity generation in combined cycle power plants to reach 3,550 MW by 2025; and recycling household waste through co-incineration and mechanical biological treatment; among others.

• Nepal added to its list of 14 contributions a target to expand the share of renewable energy in its energy mix by 20 percent by 2020 and diversify its energy consumption pattern to more industrial and commercial sectors.

• Pakistan added a conditional GHG target to reduce emissions 20 percent from business-as-usual levels by 2030, along with lists of mitigation options for energy supply, energy demand and agricultural sectors.

• Sri Lanka added a seventh contribution for the energy sector related to converting existing fuel oil-based power plants to LNG, and added more details in its NDC on other sectoral mitigation strategies in transport, waste, industry and forestry sectors.

• Uruguay added non-GHG targets for several sectors, including energy, transport, agriculture, land use, land-use change and forestry, accompanied by detailed measures including increasing capacity of renewable energy, adoption of biofuel in gasoline and diesel, and maintenance of 100 percent of the native forest area by 2025, among others.

• Venezuela introduced the Ley de Semillas (2015) (Law of Seeds) for enhanced seed management as part of its series of actions and programs addressing climate change.

Many Countries Increased Their References to Adaptation

Almost all updated NDCs put more focus on adaptation as part of their contribution. For example:

• Argentina elaborated its adaptation needs by including a full “adaptation component” in its NDC, including discussion on national circumstances, vulnerability and impacts, current efforts and adaptation needs. This information will lay the foundation for its National Adaptation Plan.

• Belize expressed intention to provide information on adaptation at a later stage in its INDC. In its NDC, an adaptation chapter describes, among others, Belize’s vulnerability, near-term adaptation actions and co-benefits, and main actions to be implemented to build resilience in priority sectors, such as coastal and marine resources and agriculture.

• Benin includes a detailed table of sectoral objectives for adaptation for 2020, 2025 and 2030, and provides further details in an annex table of adaptation measures.

• Indonesia moved discussions around its climate resilience strategy from an annex in the INDC to the main text in the NDC.

• Mali’s NDC now includes discussions on adaptation needs and action plans with cost estimates through 2020-2030, in addition to the 2015-2020 period previously included in the INDC.

• Morocco included a detailed section on its vulnerability to climate impacts in sectors such as water, agriculture and maritime fisheries. The NDC also elaborated its quantified sectoral adaptation goals for 2020 and 2030, as well as sectoral strategies, action plans, programs and initiatives that will enable the implementation of those goals.

• Sri Lanka’s NDC elaborated its adaptation contributions for its most vulnerable sectors, such as health, food security (agriculture, livestock and fisheries), water and irrigation, coastal and marine resources, biodiversity, urban infrastructure and human settlements, and tourism and recreation.

• Pakistan identified its adaptation actions and priorities in its NDC.

• Uruguay elaborated on its adaptation measures, and identified measures that have effects on both mitigation and adaptation.

None Countries Improved Their Transparency

• Argentina, Canada, Morocco and Uruguay have now specified the level of emissions that will result if their NDCs are achieved. This transparency is critically important because it provides an indication of where emissions are headed.

• Belize communicated the anticipated emissions reductions from its actions.

• Countries including Benin, Morocco, Pakistan and Sri Lanka presented more information on how their NDCs will be implemented and monitored.

Some Countries Weakened Their Commitments or Decreased Clarity

While the number of countries that strengthened their climate efforts while converting their INDCs to NDCs is encouraging, we also found examples of NDCs that indicate lowered ambition or less clarity about efforts. Such changes run counter to the Paris Agreement and could make it more challenging to rapidly curb emissions and close the emissions gap.

Some countries also removed targets from their NDC. For example, New Zealand removed references to sectoral targets and a long-term target; however, since then, Prime Minister Jacinda Ardern has committed the country to zero out its carbon footprint by 2050.

The Bahamas kept its target to reduce emissions 30 percent below a business-as-usual scenario by 2030, but removed the description translating this target as 30 percent below 2002. Removing this figure poses more uncertainty given that the emissions in the target year are no longer as clear.

Other countries revised their NDCs, likely as a result of groundtruthing earlier NDCs that were prepared ahead of the Paris COP. Benin’s revised NDC, for example, includes measures that would result in slightly greater reductions from the energy and agricultural sectors between 2021 and 2030, but would see higher cumulative emissions overall.

Mali remains a net sink of emissions in 2030, given that its land sector will continue to absorb more emissions than the country will emit; however, Mali’s new NDC presents a less ambitious unconditional net sequestration target of -12.7 MtCO2e in 2030, compared to its previous pledge of -33.6 MtCO2e in 2030.

None of these changes compare to the negative message sent by the United States. In July 2017, President Trump indicated that the country would “immediately cease implementation of its current nationally determined contribution.” Domestically, the Trump administration has systematically unraveled much of the United States’ domestic climate policies, and President Trump announced his intention to withdraw from the Paris Agreement.

Step Up for Climate Action

Addressing climate change requires decisive leadership from all countries to step up their efforts as quickly as possible – and to make sure they align with the long-term emissions reductions required to avoid the worst impacts. Countries that have already strengthened their efforts should serve as a model for others to follow.

A core pillar of the Paris Agreement requires that countries scale up their national climate efforts every five years. Countries took the first step in 2015 by submitting their INDC, and in 2020, they must take the next. By the UN climate negotiations in Poland this December, the world is looking for countries to announce that they will enhance their NDCs by 2020.

By making this commitment in 2018, countries signal to their ministers, mayors and business leaders that the journey to building a zero-carbon, climate-resilient future is underway.

The link to the original article:
http://www.wri.org/blog/2018/04/insider-whats-changing-countries-turn-indcs-ndcs-5-early-insights