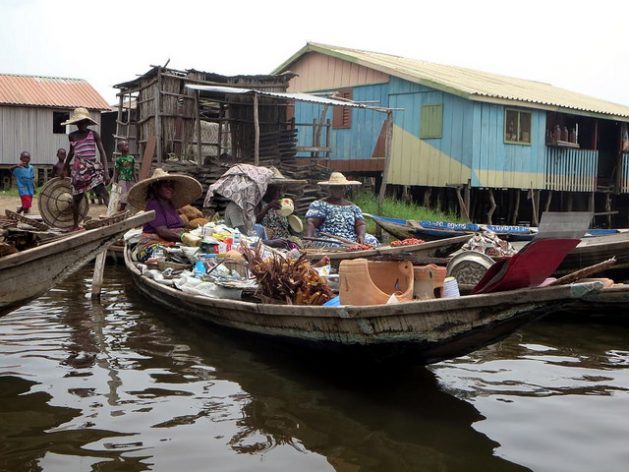 The floating market at Ganvie village on Lake Nokoue near Cotonou, Benin. Many migrants use Benin as a launchpad before heading to North Africa or Europe. But some are choosing to remain. Credit: David Stanley/CC By 2.0

COTONOU, Benin, Jul 26 2018 (IPS) - Last year, Mohamed Keita returned home to Mali after living and working in Libya for six years. Eighteen months ago he was arrested by security forces in Libya as he and other migrants tried to cross the Mediterranean Sea to Europe via a makeshift boat. After spending a traumatising six months in jail, he was transported back to Mali.

But as soon as he arrived he immediately knew that it would be difficult for him to stay put.

Keita’s home is in the central poverty-stricken Mopti region where his entire village still does not have power.

While his parents now live in the country’s capital Bamako, “even in our family house in Bamako, running water and electricity are luxuries. And when it’s raining, flooding occurs and kills people. These kinds of things, including armed conflict and terrorism, force you to go far away to look for a better life and peace,” he says as he wipes the sweat that falls heavily from his face as he works on a construction site on the outskirts of Cotonou, a major city in Benin.

“While we were waiting for the trip, we used to hear bad news of friends who had drowned at sea. Death stoked us while we waited for our turn... It was like waiting for Judgment Day.” Mohamed Keita.

Besides, he says, terrorism is still tearing the country apart, and peace and national reconciliation remain elusive.

The west African nation of Mali, which heads to the polls this Sunday Jul. 29, was caught in violent crisis in 2012 when a Tuareg group called the National Movement for the Liberation of Azawad began a fight for a separatist rule. However, AFP reported yesterday that despite recent attacks by jihadists and inter-ethnic violence, incumbent president Ibrahim Boubacar Keita said there was “no war-mongering in Mali today.” He was elected in 2013 soon after French intervention to bring peace to the nation.

But as far as Keita was concerned, no real social or economic development has taken place since he left.

Had there been, the 26-year-old tells IPS, it would have enticed him to stay and plan his future. So instead he headed to Benin, another west African country. In Cotonou, a vibrant and thriving place, he shares a small room with six other sub-Saharan African migrants who are waiting to make the journey to North Africa and eventually to Europe.

The city is a far cry from his home village or even Bamako. Women from across the continent come here to buy local material that is highly sought after to make African dresses. Business is booming as the government doesn’t charge high taxes on small businesses.

Many also like it here because they consider xenophobia and police harassment to be non-existent. Last February, the government abolished short stay visas for 31 African countries in order to develop South-South cooperation.

According to a 2015 United Nations report on the country, 2.1 percent of the 11 million people here are migrants, the vast majority of who come from the neighbouring countries of Nigeria, Togo and Niger.

“Cotonou is a good place to do business because you can earn up to 100 percent profit from selling everything you buy here,” Congolese trader Marthe Mavoungou tells IPS, as she is about to board a plane back to Brazzaville.

The country’s proximity to economic powerhouse Nigeria, also plays a role in the bustling business here as huge volumes of stock from Lagos port make their way to Benin. Items ranging from women’s bags, shoes and clothes, find their way onto local markets where they are sold cheaply.

Keita, a high school dropout, left Mali at 20 for Libya and worked as a menial labourer there. The experience was a difficult one.

“If you are black and living in North Africa…you get unfair treatment but you have nowhere to complain,” he explains.

Amid emotional abuse, exploitation and racial slurs proffered towards him almost on a daily basis, Keita kept telling himself that the experience  would come to an end once he boarded the boat to Europe.

But it was not to be.

“I was crying when we were arrested, and at the same time angry with myself for making what I thought was the biggest mistake of my life,” he says.

“The failed trip cost me 1,500 dollars, which represented all my savings from working in the Libyan construction sector,” he says, emotionally.

But his story is fortunate. While he may not have crossed to Europe as he wanted to, Keita, unlike thousands of others is still alive.

“While we were waiting for the trip, we used to hear bad news of friends who had drowned at sea. Death [stalked] us while we waited for our turn. Some migrants even began smoking drugs to kill the stress. It was like waiting for Judgment Day.”

The International Organisation for Migration (IOM) said this month that on just one weekend some 218 migrants lost their lives in two mass separate drownings. “I’ve just returned to Libya after a series of tragedies and the loss of hundreds of migrant lives including several babies,” IOM head William Lacy Swing reportedly said as he visited Libyan earlier this month. “My message is that all must focus on saving lives and protecting migrant rights.”

IOM states that this is the fifth year in a row that nearly 1,000 migrants have died or gone missing crossing the Mediterranean.

Nearly 48,000 asylum-seekers and migrants have reached Europe’s shores in the first six months of 2018, according to IOM figures.

Keita still thinks that those who make it to Europe are lucky. “But if you ask them about the things they endured before achieving their goal, they would tell you thousands of stories of misery, abuse and pain,” he says.

His own pain did not end after trying to leave Libya for Europe. He says he experienced terrible and painful things in jail, which he would rather not talk about.

“The TV images you see showing migrants crammed in one place under the scorching sun like sheep waiting to be taken to the abattoirs is only a tip of the iceberg,” he explains.

A report released in March by the U.N Human Rights Office estimates that 6,500 people are being held in official prisons while thousands more are in facilities run by the government or run by armed groups affiliated to the state. Earlier this year Doctors Without Borders said that some 800 migrants in Libya’s detention centres were living under worsening conditions.

Many migrants have, however, returned home thanks to IOM’s Voluntary Humanitarian Return (VHR) programme.

Some choose to stay

Ousmane Bangoura, who lived in Morocco for four years in a failed attempt to reach Spain, also lives in Cotonou where he sells used clothes in the city market Dantokpa.

His experience was a difficult one.

“Arabs hate blacks for no apparent reason and they call us derogatory names. Everybody is against you, including your neighbours. Besides, local media is also fuelling xenophobia through subjective and discriminatory reports,” Bangoura says.

But Bangoura, who is from Guinea-Conakry, tells IPS, that he will remain in Benin.

“I’m happy with what I’m currently doing, as I’m able to my life and send money home time to time to my ailing parents,” he says.

There seems to be a recent increase in the number of migrants flocking to Cotonou looking to get to North Africa, according to a local community leader.

Some observers firmly believe that the city could become another Agadez (the door of Sahara), a northern town of Niger, where the country’s security forces have been conducting an aggressive campaign to root out human smugglers and migrants waiting to go to Libya. The campaign, which has been welcomed by the European Union, has also seen stocks of weapons seized and a number of arms traders arrested.

Congolese migrant, Didier, and his friend Felix, from the Central African Republic, both recently arrived at Cotonou from Agadez. Didier tells IPS that human smugglers have descended on Cotonou.

“A man and a woman came to see us on Sunday, asking if we wanted to travel to Spain via Morocco,” Didier says.

“He said all the paperwork will be done here in Benin and that they will take us through Senegal and Mauritania. They were asking for USD700 for the trip to Morocco, and once you reach there, they will take you to their ‘agents’ who will charge you USD1,500 negotiable for the trip to Europe. I’m not yet ready, but I will go come or shine. Europe is every young African’s dream.”

But for Keita the dream of living and working in Europe hasn’t died. But he says he will do it formally, when the time is right. For now he is happy to remain in Benin and earn a living.