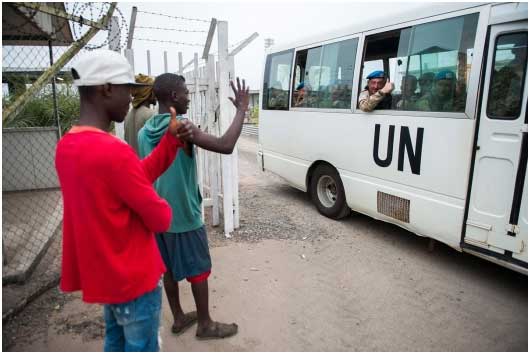 In his inaugural address, President Weah was quick to advise his compatriots to “not allow political loyalties to prevent us from collaborating in national interest.” He vowed to tackle inequality because “the absence of equality and unity led us down the path of destroying our own country.”

Weah was referring to the Liberian civil war from 1989 to 2003, which left the country in tatters politically and economically. The United Nations Mission in Liberia (UNMIL) was deployed in 2003 to help restore peace and security in the country.

After nearly 15 years in Liberia, the UN peacekeeping mission ended last March, having disarmed more than 100,000 combatants, secured about 21,000 weapons, enabled about one million refugees and displaced persons to return home and assisted in the holding of three peaceful presidential and legislative elections.

The UN’s secretary-general António Guterres in a statement issued in early April expressed his “respect to the memory of 202 peacekeepers who lost their lives” in Liberia.

“Peace is here to stay and our democracy is maturing. Now we need jobs,” Marwolo Kpadeh, head of the Liberian Youth Network, a leading youth organization, told Africa Renewal.

After the peaceful handover of power, Kpadeh is correct when he says that Liberia’s key challenge is now mostly economic. “Limited employment continues to undermine the welfare of Liberians in both urban and rural areas,” notes the World Bank.

While President Weah must deal with economic issues, the withdrawal of UNMIL peacekeepers will test the government’s readiness to perform public safety and security duties, writes FrontPageAfrica, a Liberian newspaper.

The UN has allayed concerns, promising to remain engaged even in the absence of a peacekeeping force.

The UN family will remain in the country “with a view to ensuring that the hard-won peace can be sustained and the country and its people will continue to progress and thrive,” Guterres added, in his statement.

The UN Country Team, including its agencies, funds and programmes, such as the UN Development Programme, UNICEF and the World Food Programme, will remain in the country.

A “strengthened Resident Coordinator” will lead the team and help the government achieve targets set in the 2030 Agenda for Sustainable Development, Amina Mohammed, the UN’s deputy-secretary-general, said in March.

Mohammed, who visited Liberia in late March as the final batch of peacekeepers prepared to leave, praised UNMIL for being “at the forefront of establishing the key foundations for peace in Liberia.”

The UN’s promise of continuing engagement should be welcome news to Liberians, who have been dealing with the ubiquitous peacekeepers over the past 14 years.

By 2003, with more than 205,000 people killed, the UN Security Council authorized the establishment of a peacekeeping force consisting of up to 15,000 military personnel and over 1,000 police officers, among others.

UNMIL began operations in October 2003, when about 3,500 troops of the Economic Community of West African States Monitoring Group (ECOMOG), who had arrived in Liberia a few months prior, were rehatted as UN peacekeepers. Guterres said that ECOMOG troops laid the foundation ahead of UN peacekeepers’ deployment.

The Comprehensive Peace Agreement, signed by President Taylor and leaders of all warring factions and political parties on August 18, 2003 in Accra, Ghana, provided the political cover for UNMIL’s deployment throughout the country.

UNMIL’s first force commander, now-retired Lieutenant General Daniel Opande, described the situation of the country at the time of deployment: “Nothing functioned, the government had collapsed, no security arrangement, the entire country was in turmoil. People were moving from place to place, looking for safety or for food. It was very bad.”

“When I arrived in Liberia, a thick cloud of uncertainty and insecurity hung over the country,” corroborates Patrick Coker, who joined UNMIL as a senior public information officer in October 2003. “There was no electricity, no water, fighters carried weapons around, thousands of internally displaced persons, hopelessness, poverty, anguish—we were on edge.”

UNMIL and its partners, including an interim government headed by Gyude Bryant, attempted but failed to begin disarmament on December 7, 2003. General Opande attributed the botched attempt to UNMIL’s ill-preparedness. There was a misunderstanding over money to be paid the fighters, and when they began firing in the air, the process ended abruptly.

Fighters of the rebel faction Liberians United for Reconstruction and Democracy (LURD) tested UNMIL’s resolve on Christmas Day of 2003 when they prevented the peacekeepers from deploying in Tubmanburg, northwest of Monrovia. Two days later, General Opande led heavy reinforcements of troops and weapons back to Tubmanburg. This time the fighters capitulated, even danced—and, bizarrely, set fire to their checkpoint.

“The Liberian people are tired of war. We too are tired,” said LURD’s deputy chief of staff, “General” Oforie Diah.

The mission had learned a lesson and so, when disarmament restarted in April 2004 after a robust communications campaign to educate combatants on the process, there were no serious hitches.

Coker recalls that “dealing with the ex-combatants, who had been in the bushes for more than a decade, was no easy task.” At the slightest provocation, such as a delay in payment of disarmament allowance, they rioted and threatened to torpedo the peace process. During such moments, UNMIL and partners often relied on Liberian women to bring the former fighters under control.

“If there is a group in Liberia that I, Opande, can give the biggest congratulations for bringing peace, it is the women,” says Lieutenant General Opande.

After a successful disarmament, demobilization, rehabilitation and reintegration process and peaceful elections, the mission’s attention shifted to providing security for the country, helping to midwife a new army and police force and extending civil authority throughout the country. As well, UNMIL provided technical and logistical support to various government departments.

Former president Ellen Johnson Sirleaf inherited an economy ruined by war; however, she mobilized foreign and domestic resources to kick-start development, including in the energy and transportation sectors.

In 2010, Liberia secured nearly $5 billion in debt relief from the International Monetary Fund, World Bank, African Development Bank and other creditors. That was 90% of the country’s total foreign debt and 15% of its GDP.

As the economy was taking off, the Ebola epidemic hit in late 2014 and caused a negative 1.6% growth rate by 2016. The World Bank now forecasts modest but sustained positive growth after a 2.6% rise last year.

Fourteen years of war, bad leadership and the Ebola epidemic might have derailed Liberia’s socioeconomic development, but Weah’s inauguration—as much as Sirleaf’s 12 years in power—appears to be rekindling hope in the country’s future.

President Weah needs to build on Sirleaf’s successes, writes Benjamin Spatz in the New York Times. “She brought Liberia back from the dead. Now it’s his turn to nurture the country’s fledgling institutions by taking on its coercive, corrupt political culture.”

In sum: “Liberia is an important example of what sustainable peace means in practise,” reflected Mohammed, speaking for the UN.

Kpadeh’s hope of a better country depends on sustained peace. “Development is never possible without peace,” he said. “We should all be proud of UNMIL’s achievement.”

*Africa Renewal is published by the UN’s Department of Public Information.
The link to the original article: https://www.un.org/africarenewal/magazine/april-2018-july-2018/mission-accomplished-15-years-peacekeeping-success-liberia