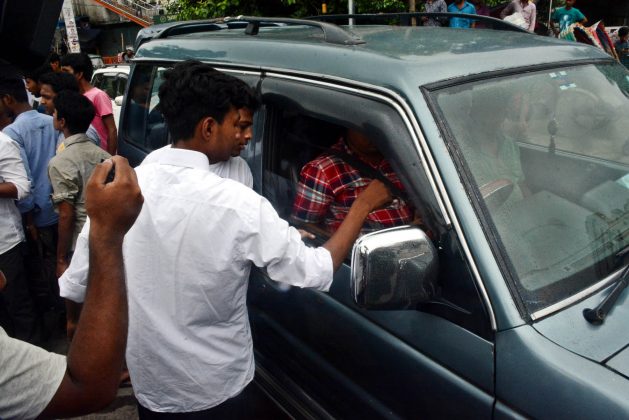 About 3,000 to 5,000 student protesters took to Bangladesh’s streets at the end of July and in early August, demanding safer roads. Students even imposed informal roadblocks in order to check the roadworthiness of vehicles. Courtesy: A.K.M. Moshin

DHAKA, Aug 31 2018 (IPS) - After the recent student uprising in Bangladesh, and despite increased policing on the streets and amendments to the traffic laws, there has been criticism that things have not changed significantly enough to make the country’s roads safer.

Ilias Kanchan, an actor and road safety activist, tells IPS that while the government was quick to observe ‘Traffic Week’ at the start of August, during which time the police had been actively inspecting vehicles and private cars for violations, it was not sufficient.

“The move was an eye wash. We notice the same [unroadworthy] public buses on the streets again driving without valid road permits and driving licenses. Although the traffic police are checking and fining violators everyday, the scale of violations have not declined, which shows ignorance [about the laws on the part] of the vehicle owners,” Kanchan, who himself narrowly escaped injury in a road accident in 1989, tells IPS.

Kanchan has been advocating for safer roads under the Nirapad Sarak Chai (We Demand Safe Roads) campaign for the last 25 years, ever since his wife was killed in a tragic road accident.

About 3,000 to 5,000 student protesters took to the streets at the end of July and in early August, demanding safer roads and calling for order to be brought to the chaotic, age-old public transportation system—one that is mostly dominated by private transport owners and workers.

The protests, the first of its kind by students in the history of this country, began after a bus crashed into students on the afternoon of Jul. 29, killing two and injuring many others. It sparked off violent protests across the capital Dhaka, a city of over 18 million people.

Shaken by the nationwide, fast-spreading student road blockade movement, the government bowed to the ultimatum of demonstrators, agreeing to meet their demands in phases.

Quick changes to the laws

The government promised safer roads and a clampdown against illegal bus drivers. And the country’s relevant traffic departments are already implementing some of the demands, which include:

In early August, cabinet approved the Road Transport Act 2018, which changed the maximum sentence for death in a road accident to five years without bail, from a previous maximum of three years with bail. Fines ranging from USD 50 to USD 200 for speeding and other traffic offences were also imposed. The act will soon be passed into law by parliament.

The effect of the clampdown is often noticeable on Dhaka’s streets. Motorcyclists now wear helmets and private cars and buses are also forced to drive in their demarcated lanes, instead of driving all over the road as previously. Speeding is virtually absent and the use of indicator lights when turning is mandatory.

The police and road safety departments have substantially increased their vigilance and checking, according to officials in these departments.

Some feel sentences are too lenient

But Kanchan tells IPS that activists had called for a maximum sentence of 10 years imprisonment and were dissatisfied with the new proposed act.

“We had proposed a minimum sentence of five years instead. We had also proposed punishing not only the drivers [responsible for] accidents but also the [vehicle] owners for neglecting to comply with the laws.

“This clearly shows how serious the governments [is] about road safety,” Kanchan says.

Recent research by the Accident Research Institute at Bangladesh’s University of Engineering and Technology shows that reckless driving and speeding cause 90 percent of the 6,200 road accidents that occur in the country each year.

The report also shows that in the past three and a half years over 25,000 people were killed in road accidents alone—about 20 people per day. And over 62,000 people were permanently injured or maimed during that same timeframe. In addition, the Bangladesh loses USD 4.7 billion from these accidents—about two percent of the country’s GDP—each year.

Well-known architect and outspoken social activist, Mubasshar Hussain, tells IPS: “I am very hopeful of a better situation as the government is showing signs of bringing safety on the roads but the point is we let this situation reach its limits. In general we are too tolerant and seldom challenge or protest crimes committed by the unruly drivers.”

“I also see a lack of seriousness from the traffic division who control and are responsible for maintaining order on the streets. Despite checking, [unsafe] vehicles and illegal drivers are still allowed to drive on the streets and it is a shame that despite such a stir the same crimes are taking place again,” he says.

“I don’t think the observations are correct,” he says responding to the criticism.

“Things have drastically changed as you can already see on the streets of Dhaka and other cities. We have launched massive police check posts with mobile courts to give on the spot decisions for any offence. Far more numbers of police have been deployed to keep vigil and check any offence.”

“The records of fines and punishments for fake licenses and registration documents in the last three weeks show the difference. Such a drive to bring offenders to book could soon bring better safety standards on the roads,” says Rabbani.

However, some are concerned that the powerful lobbying power of transport owners means that amendments to the laws are not strong enough and that corrupt police officers will continue to overlook their transgressions.

“It is indeed also frustrating that the amendments are largely ‘dictated’ by the transport owners’ bodies that are known to exert pressure on the lawmakers to sway clauses of laws in their favour,” Kanchan accuses.

“Two separate systems largely work on the roads of Bangladesh. One is [comprised of] the businessmen who run the affairs of the transport system and continue to enforce the illegal driving of unroadworthy vehicles by unskilled drivers on the streets every day.

“Millions of taka is allegedly traded as bribes to overlook such crimes. In the other system, traffic police or highway police monitor and check on private vehicles and drivers who largely comply with the road safety rules and regulations,” Huque says.

But Khondoker Enaeytullah, the general secretary of Bangladesh Sarak Paribahan Malik Samity (Bangladesh Transport Owners Association), tells IPS: “The transport owners are complying with the demands for stricter fines and punishment to the offenders.”

“There are massive changes proposed in the operations of all public transportation in the city. All buses will be regulated by one single authority instead of [being run by] individual owners who control the transport businesses without any accountability and which gives way to unprecedented and unhealthy competition and hence chaos.”

“Once the new system of public bus services is in place, there would be no more competition to pick up passengers and hence no question of speeding. All buses would be inspected for safety and fitness before each leaves to pick up passengers. These new measures will certainly ensure safer roads,” says Enaetullah.