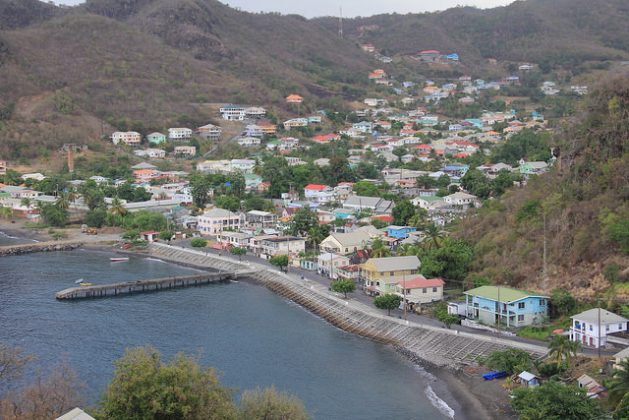 Rising sea levels have resulted in the relocation of houses and erection of this sea defence in Layou, a town in southwestern St. Vincent. Credit: Kenton X. Chance/IPS

ST. GEORGE’S, Nov 28 2018 (IPS) - The Caribbean will not be left out of the negotiations at COP24 – the 24th Session of the Conference of the Parties to the United Nations Framework Convention on Climate Change – that will take place from Dec. 3 to 14 in Katowice, Poland.

The event will be attended by nearly 30,000 delegates from all over the world, including heads of governments and ministers responsible for the environment and climate issues.

Two of the region’s lead negotiators say the Caribbean Community (CARICOM) must be present, given that the plan for the COP24 summit to adopt a full package implementing the Paris Agreement.

“I agree with the saying that if you’re not at the table then you’re on the menu, and our priorities will suffer. We’ve got to be there to ensure that the special circumstances and unique vulnerabilities of small island states are protected. We need to be there for that,” Spencer Thomas, Grenada’s Special Envoy for Multilateral Environmental Agreements, told IPS.

The Paris Agreement is the first international agreement in history, which compels all countries in the world to take action on climate protection. The implementation package will allow for the implementation of the agreement in practice. It will thus set global climate and energy policy for the coming years.

Thomas pointed to recent devastating hurricanes and their impact on the region, saying the Caribbean must attend the COP to work towards resilience building, to make progress on; the issue of loss and damage, and the issue of technology development, especially since it relates to the changing energy sector.

“So, we need to be there to protect all of those gains that we have made so far and to consolidate our actions going forward in terms of climate action for the Caribbean,” he said.

“Resilience is key. Building resilience across the Caribbean or across all Small Island Developing States is a key issue we need to be working on at the COP.”

Thomas said the Paris Agreement is a framework agreement, setting out the platform for global action on climate change.

“In my view, what needs to be done now is for us to elaborate and to implement those frameworks and to create the rules and guidelines for those frameworks,” Thomas explains.

“So, in a sense, it is the platform for going forward. It changed the dynamics of the previous negotiations and it has centralised the issues, to the extent that all parties now, all countries have taken a commitment based on their own domestic situation to deal with the issue of climate change.”

Meanwhile, Leon Charles, Advisor in Grenada’s Ministry of Environment, said there are two outcomes that will result from the 2018 negotiations.

He said the first is the elaboration of the framework for implementation of the Paris Agreement.

“The last two years we spent elaborating on what are these day-to-day rules to implement the agreement. So, for example, in terms of the national contributions of countries, we’re negotiating how should these contributions be defined; what information should be presented so that we can actually measure that people have done what they said they are going to do. Then how do you report on what you said you’re going to do, how is it validated and so on,” Charles told IPS.

“There’s a system called the compliance system for example, how do we measure whether or not countries have delivered what they said they were going to deliver, and more importantly, what’s going to happen to those who have not met their targets. We’re supposed to come up with something that’s facilitative and should help them in future years to improve their targets.”

Executive Secretary of the United Nations Framework Convention on Climate Change Patricia Espinosa says with the devastating impacts of climate change increasingly evident throughout the world, it’s crucial that parties achieve the primary goal of the COP24: finalising the Paris Agreement Work Programme.

This will not only unleash the full potential of the Paris Agreement, but send a signal of trust that nations are serious about addressing climate change, she said.

Like Thomas, Charles agrees that it is important that the Caribbean is represented at the COP24.

“If we want to be successful and get the 2018 outputs to reflect what’s important for us, we have to participate,” he said.