United Towards Achieving Health For All in Kenya

Sicily Kariuki is the Cabinet Secretary, Ministry of Health in Kenya. Siddharth Chatterjee is the United Nations Resident Coordinator to Kenya. 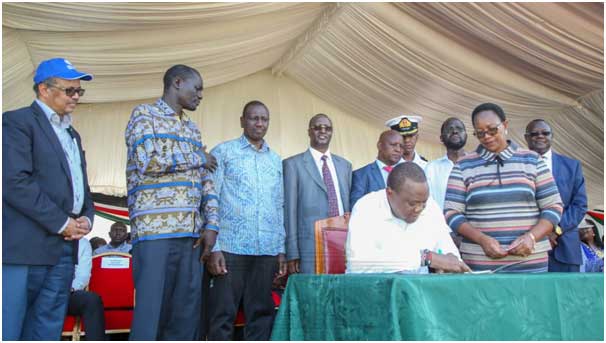 NAIROBI, Kenya, Dec 18 2018 (IPS) - According to Director-General of the World Health Organization (WHO) Dr Tedros Ghebreyesus, the implementation of UHC is “more a political than an economic challenge”.

Of all the Sustainable Development Goals, few would rival good health as the definition of a country that has a sustainable, inclusive, peaceful and prosperous future, and the launch this week of the pilot phase of Kenya’s journey towards Universal Health Coverage heralds a major step towards that future.

It was a fitting statement of national intent and unity to make UHC a success in Kenya to see President Uhuru Kenyatta and Deputy President William Ruto preside over the launch of the pilot programme in Kisumu county. They were joined by erstwhile political contenders, former Prime Minister Raila Odinga and Wiper Party leader Kalonzo Musyoka, united by a shared vision to improve health coverage in Kenya.

Ensuring that the pursuit of good health leaves no one in financial dire straits is a task that requires much more than good intentions. WHO estimates that to achieve SDG target 3.8 requires one billion more people to have universal health coverage by 2023.

In Kenya, health-related expenses are driving about one million into poverty every year, and health care is second only to food in family budgets. These are families that wake up every day to the reality that they could be within just one accident or illness away from bankruptcy and penury.

In demonstration of his commitment to keep health front and centre of the development agenda, President Kenyatta has identified health as one of the key pillars of his legacy.

The promise of UHC is based on real-life experiences of countries with whom we have much in common. The transformation of countries now known as Asian Tigers was largely driven by investments in the health of the citizens, with special focus on sexual and reproductive health.

When the health of the mother is provided for, the cyclical benefits in terms of physical and cognitive development of the subsequent generations is assured.

The Ministry of Health has been working with the United Nations (UN) in Kenya & various stakeholders to identify what interventions represent the most effective pathways for attaining UHC in Kenya. These partners include civil society and the private sector.

Our vision is for approaches that are not just affordable, but those that promote equity and effectiveness, ensuring that the rights of the most vulnerable are not forgotten, as the central tenet of universality.

Kenya also announced that UHC will involve scaling up immunization, prevention of water borne, vector borne, TB, HIV and sexually transmitted diseases, improving maternal and child health as well as nutrition of women who conceive. Kenya will also focus on prevention of non-communicable diseases like diabetes and hypertension.

Our mission is to deliver a robust system that will reach out to those who have been left behind. Through community health workers and volunteers, we know that a few more vaccines will be delivered to children in a remote village; there might be new case of an infectious outbreak detected, reported and averted.

It is because of the primacy of these community volunteers as frontline workers and their role in the achievement of UHC that the Government has established a fund to provide a stipend as an incentive for the workers.

The partnership between the Ministry and the UN system in Kenya is steadily building the foundations for a responsive health system for communities, for whom health was inaccessible, unaffordable or altogether unavailable.

In the frontier counties of North-eastern Kenya, flagship programmes such as the Area-based joint programme with the county of Turkana are steadily delivering results. We are targeting not just dramatic, overnight success, but the incremental changes that for instance involve building the capacity of community health workers to deliver primary health care.

With Kenya’s Vision 2030 ambition of providing a high quality of life to all its citizens, the most urgent need is to ensure that everyone stays healthy to participate in economic development.

The Government of Kenya and UN partnership is committed to make Kenya the blueprint for the rest of Africa on how Universal Health Coverage can be attained.